Helmand province senator says 13 civilians killed in one air strike and eight in another. 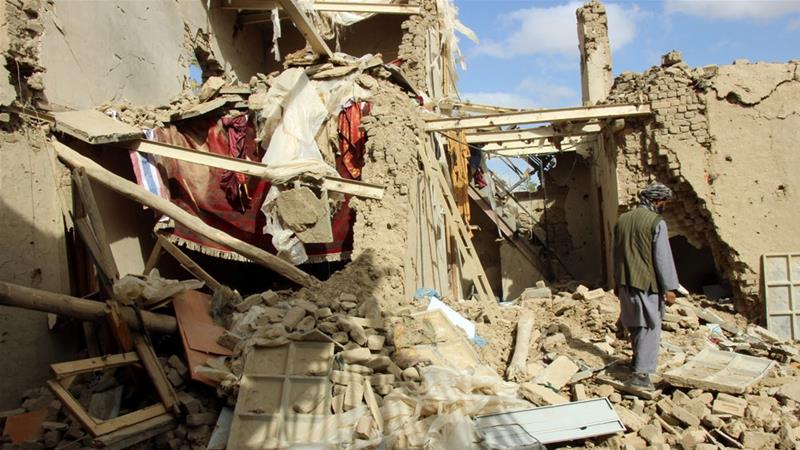 Hundreds of Afghans protested in southern Helmand province on Sunday against deadly attacks on civilians.

Security force raids over the past two months on suspected Taliban hideouts in Helmand’s Sangin district killed at least 30 civilians and wounded many, including women and children.

“This situation is no longer acceptable to us, and we are telling honourable President Mohammad Ashraf Ghani and NDS [secret service] head Masoum Stanikzai to put an end to these raids,” Attaullah Afghan, chairman of the provincial council, told protesters.

Mohammad Hashim Alkozai, a senator from Helmand, said 13 civilians were killed in one air raid and eight in another. Heavy fighting is under way in the district between NATO-backed Afghan forces and the Taliban.

Alkozai said at least five other people were wounded in the attacks.

“Innocent people, women and children, are the only victims of the air strikes,” he said.

Zwak confirmed that air raids had killed civilians but could not provide further information. He said an investigation was launched.

Alkozai said he has raised concerns about civilian casualties in parliament and with government officials, but they have taken no action.

The UN Assistance Mission in Afghanistan (UNAMA) expressed its “strong concern” at the rising number of civilian casualties from air attacks in 2018.

It said aerial bombardment killed 149 people and wounded more than 200 other civilians in the first half of 2018, up 52 percent from the same period last year.

The figure accounted for roughly seven percent of total civilian casualties for the six-month period.

One of the worst incidents occurred in the northern province of Kunduz in April last year, when an Afghan air attack on a religious gathering killed or wounded 107 people, mostly children, a previous UNAMA report said.

The government and military said the attack had targeted a Taliban base where senior members of the group were planning attacks.

Afghan forces are struggling to combat the Taliban, who hold sway over nearly half the country and carry out daily attacks on security forces.

The Taliban killed at least eight Afghan police in an attack on a checkpoint in the northern Sari Pul province late Saturday, said Zabihullah Amani, the governor’s spokesman. He said three other police officers were wounded in the gun battle, which lasted several hours.

In a separate development, the Afghan intelligence service said it had arrested three members of the Haqqani group, a Taliban faction believed to be based in Pakistan, in connection with two bombings in Kabul that killed and wounded dozens of people.

The National Directorate of Security (NDS) said the three suspects confessed to taking part in a truck bombing near the German Embassy in May 2017 that killed at least 90 people, and a November 2018 attack that killed five security contractors, including a British national.

The NDS also said it had arrested a university professor and an imam in Kabul who had recruited hundreds of young people for the local Islamic State of Iraq and the Levant (ISIL, also known as ISIS) affiliate, sending them to the eastern Nangarhar province for training. It said the imam confessed that his own nephew had carried out a suicide bombing in Kabul.