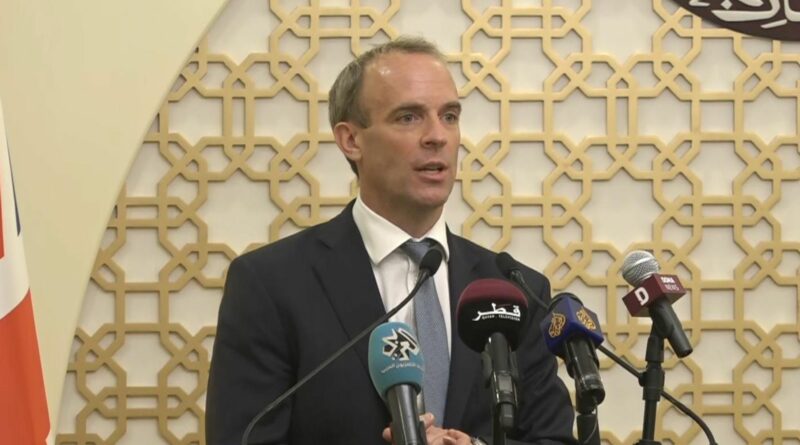 The UK’s foreign secretary has said there needs to be “wider buy-in” from countries in the region around Afghanistan to exert maximum influence on the Taliban.

Speaking at a news conference in Doha with his opposite number from Qatar, Dominic Raab said an “international coalition” needs to be formed to “exert the maximum moderating influence” on the Taliban following its takeover of the central Asian country.

Mr Raab said: “We need to get wider buy-in, regional countries involved… there’s a lot of countries with a direct stake in what happens in Afghanistan, as well as countries who will feel and be moved by the humanitarian risks and the plight. “Above all, we need to put a grouping together that can exert maximum moderating influence on what the Taliban does next. And we will certainly be judging them. Yes, on their words. But more importantly, what they’re willing to do to live up to the assurances that they’ve made.”

Despite saying there was scope for engagement and dialogue with the Taliban, he said the UK has no immediate plans to recognise the group as a government.

Qatar’s Foreign Minister Sheikh Mohammed bin Abdulrahman al Thani said the Gulf state was talking with the Taliban and working with Turkey to see if it can provide technical support to restart operations at Kabul airport.

It comes as Mr Raab said he hoped that many of those who had worked with the UK and UK-linked organisations – or were part of Afghan civil society but were not among the 17,000 evacuated from Kabul airport – may still be given safe passage out.

Meanwhile, in other developments around Afghanistan:

• Taliban rulers are to unveil their new government, with a ceremony being prepared at the presidential palace

• Prices are soaring, the currency has plunged, shops are closed and the Taliban is struggling to keep banks and essential services running

At a press conference in Doha, the Mr Raab said four key points for the future are: stopping Afghanistan becoming a “haven” for terrorists, preventing a humanitarian crisis, preserving regional stability and holding the Taliban to account over its claims it will form a more inclusive government.

He added that Qatar was a “lynch pin” in dealing with the Afghanistan crisis.

Mr Raab said: “We have secured safe passage out of a Afghanistan for over 17,000 British nationals, Afghan workers and other special cases since April, but I do think we feel responsibility to make sure that the remaining British nationals and Afghan workers can come to the UK, that is why we watch with great interest what may be possible at Kabul airport.

“But we are also here and I am here – not just in Qatar but moving on afterwards – to talk to regional countries about how we can ensure safe passage through third countries.

“The reality is, as I have described, we will not be recognising the Taliban any time in the foreseeable future, but I think there is an important scope for engagement and dialogue and testing the intentions and indeed the assurances that have already been made by the Taliban.”

Sheikh Mohammed said: “Regarding the airport, actually we are still in the evaluation process.

“There is no clear indication when it is going to be fully operational yet but we are working very hard and also engaging with the Taliban to identify what are the gaps and the risks for having the airport back up and running.

“We will remain hopeful that we will be able to operate it as soon as possible.”