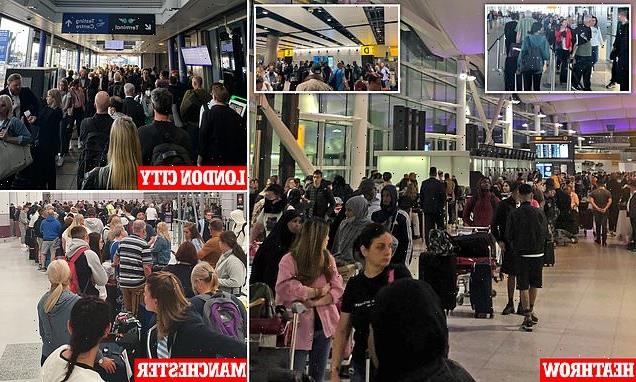 Holidaymakers urge others to ‘avoid Heathrow at all costs’ as they are forced to queue for security OUTSIDE terminal, as others are forced to wait in the multi-storey car park at Manchester and passengers face THREE-HOUR backlogs at London City

Britons trying to fly abroad for their summer holidays once again faced huge waits at airports across the country today – with those trying to leave Manchester Airport left queuing for security in the terminal’s car park.

Passengers using London Heathrow also described a ‘total mess’ this morning as they endured long waits for security with queues for Terminal Two starting outside the building – and Terminal Three also looking busy.

Those flying out of London City – which tends to run short-haul flights to European destinations and has been generally unaffected by the recent chaos – also described ‘utter chaos’ and an airport ‘totally out of control’.

Staff shortages have caused lengthy wait times at security and check-in desks in recent months – with problems only set to get worse as the school holidays begin later this month when strike action is planned at Heathrow.

Returning passengers have also faced waiting hours to get their luggage back after flights have landed, with bags and suitcases left abandoned on carousels – with some people deciding to sleep on terminal floors.

One passenger waiting at Manchester today tweeted a photograph of a long queue in the airport’s car park shortly before 7am today, saying: ‘If you are flying out of @manairport T3 today, get to the airport as soon as you can. This is currently the security queue – out of the terminal, across the bridge, and into the T3 multi storey car park!’ 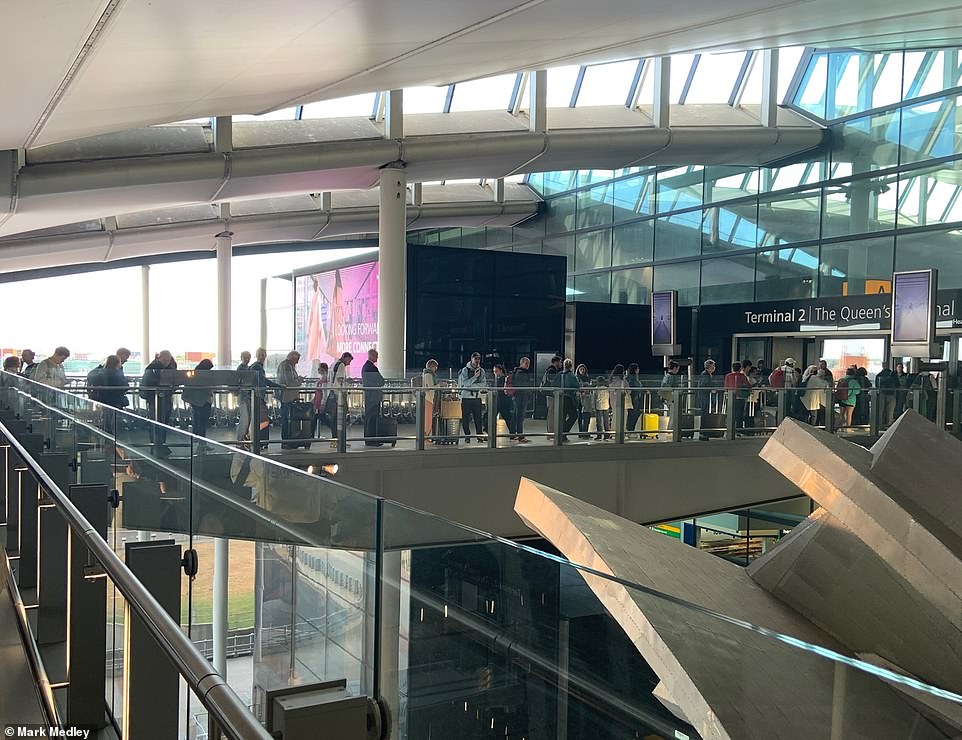 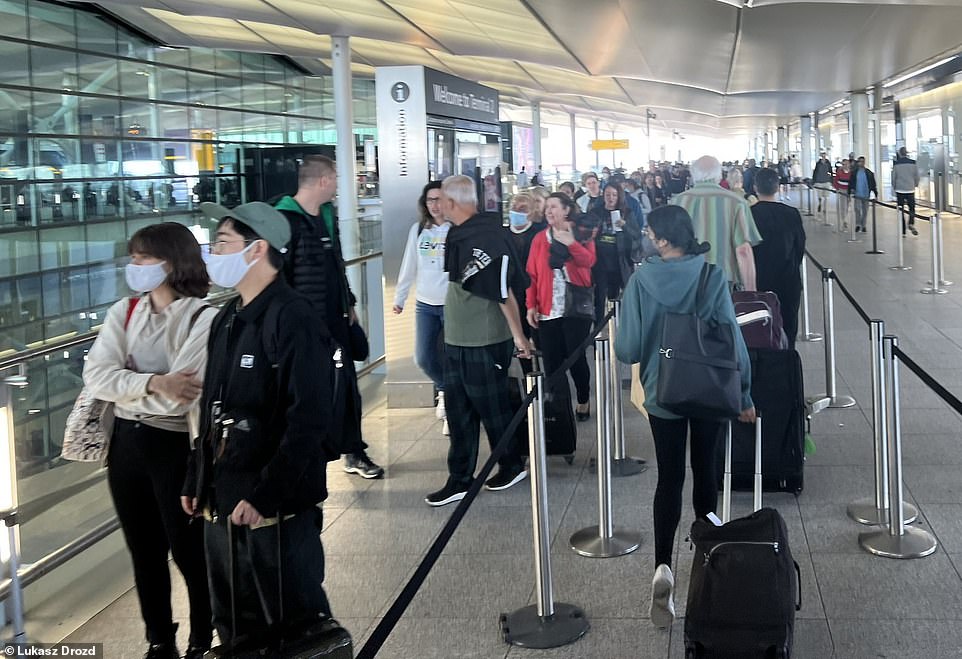 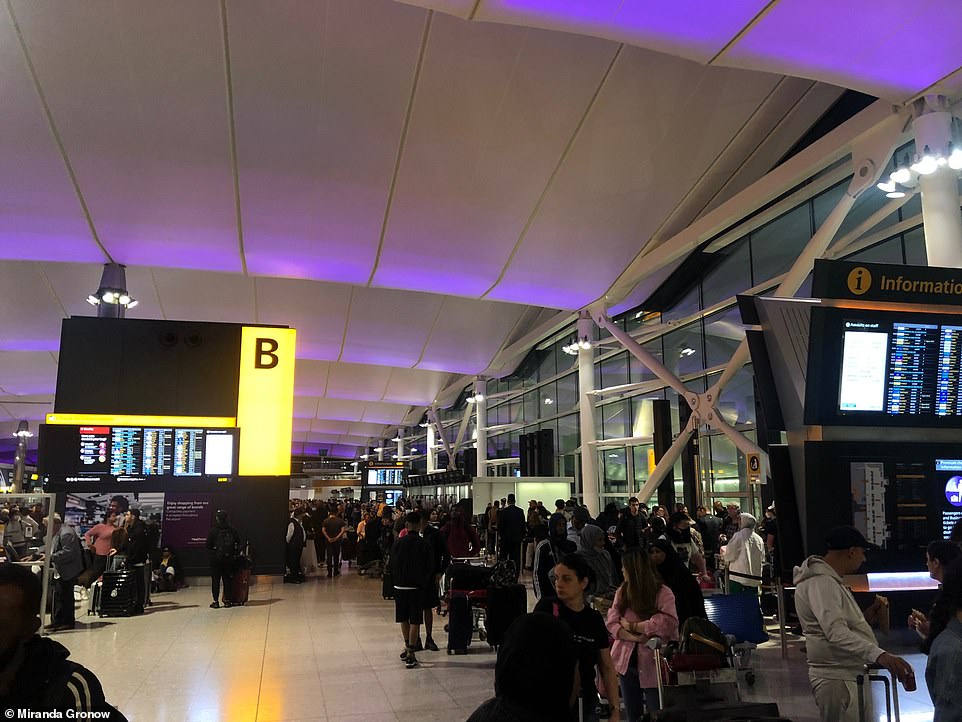 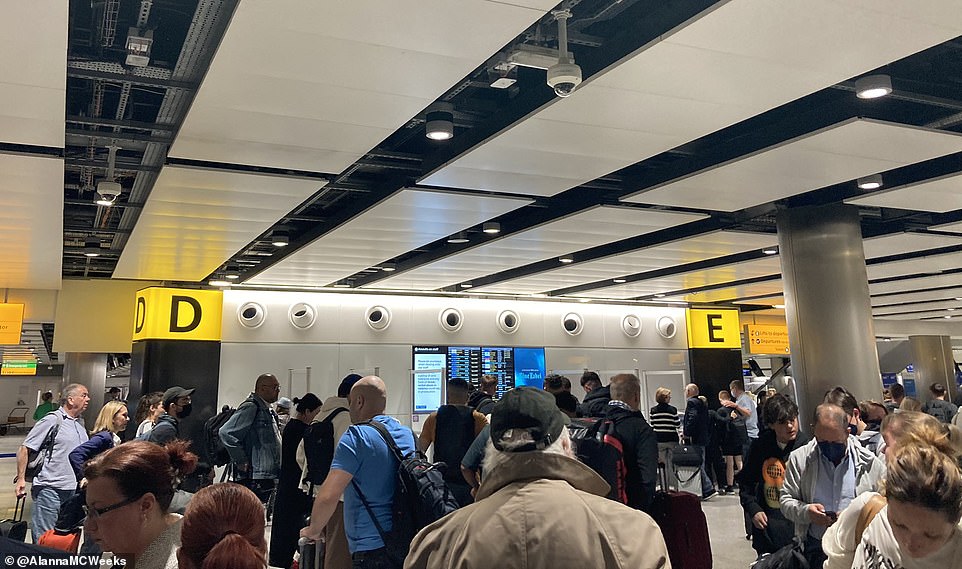 LONDON HEATHROW AIRPORT: A passenger who got to Heathrow for 4.20am today posted this picture from Terminal Three

Another at Manchester said it was ‘carnage’ amid a ‘massive queue for security’, while a third added: ‘Well done. Today is the worst ever. Actually standing in the car park to wait for security. Good job. Utter shambles.’

And a fourth passenger at Manchester tweeted: ‘Travelling pre pandemic was such a comfortable experience. These days it’s three hours before, on your feet and queues for hours plus the anxiety if the flight will even depart.’

In yet another blow for holidaymakers, unions said they would push back against plans to relax overnight flight rules that would see staff working ‘anti-social hours’.

Airlines are limited to the number of flights that can run between 11.30pm and 6am at major airports, which often leads to flights being cancelled if they are delayed.

Amid mounting pressure to solve the travel chaos, the Department for Transport said it will consider suspending the rules to ease disruption.

But last night unions vowed to oppose the plans over fears staff could be made to work long hours during the night.

A GMB union source told the Daily Telegraph: ‘It’s not fair to force our members to work nights to pick up the slack for their mistakes.’

It comes as holidaymakers are now facing a summer of travel chaos in Europe as countries across the continent grapple with staff shortages and strikes.

Huw Merriman, chairman of the transport select committee warned that the plan could ‘annoy the heck out of residents’ but said he was open to finding out more about lifting the night ban.

He added: ‘I don’t see what good that would do and can see what damage that would do. I don’t know if crew will want to fly at two in the morning.’

Elsewhere travellers posted images of huge queues at Heathrow, with one saying: ‘Security line at Heathrow starts outside the terminal! I’m on day two of my battle with this airport. Avoid at all costs. Total mess!’

Another passenger there tweeted a picture of queue outside the entrance at 7am, saying: ‘This is the security line at Heathrow Airport Terminal Two. Yes we are outside. And this is after arriving almost an hour ago.’

There were also big queues at London City, where one passenger said: ‘Big chaos at LCY. Three hours to get through security at 6am. Better to fly out of Stansted with a low cost carrier. Totally out of control, what a mess. This used to be a prime service. All gone wrong. Terrible.’

Another described ‘utter chaos at London City Airport’, while a third tweeted a picture of a huge queue and said: ‘Delayed. Missed connection. Stranded at Heathrow overnight. Rebooked from City. Travel to City at 6am. City…’

In response to the chaos, a London City spokesman told MailOnline today: ‘The average journey time through the airport was 45 minutes this morning.

‘This is longer than usual and was caused by staff sickness and additional passengers who were rebooked onto LCY services from other airports. We apologise for any inconvenience caused. For passengers travelling through London City in the days ahead, to help manage waiting times, we would like to remind them to turn up no more than two hours before their flight.

‘Looking ahead, the airport will be fully staffed, and operationally ready, for the summer getaway.’

‘During our ongoing recovery from the pandemic, we continue to advise customers there may be some times when security queues are longer than usual, which is why we advise people to arrive three hours before their flights.

‘This morning, while the vast majority of people passed through security in under 30 minutes, waiting times peaked at more than 60 mins in two of our terminals for a period of time, and we are sorry for any inconvenience caused.’ MANCHESTER AIRPORT: At Manchester today, one passenger said they had been ‘standing in car park for 30 minutes already’ 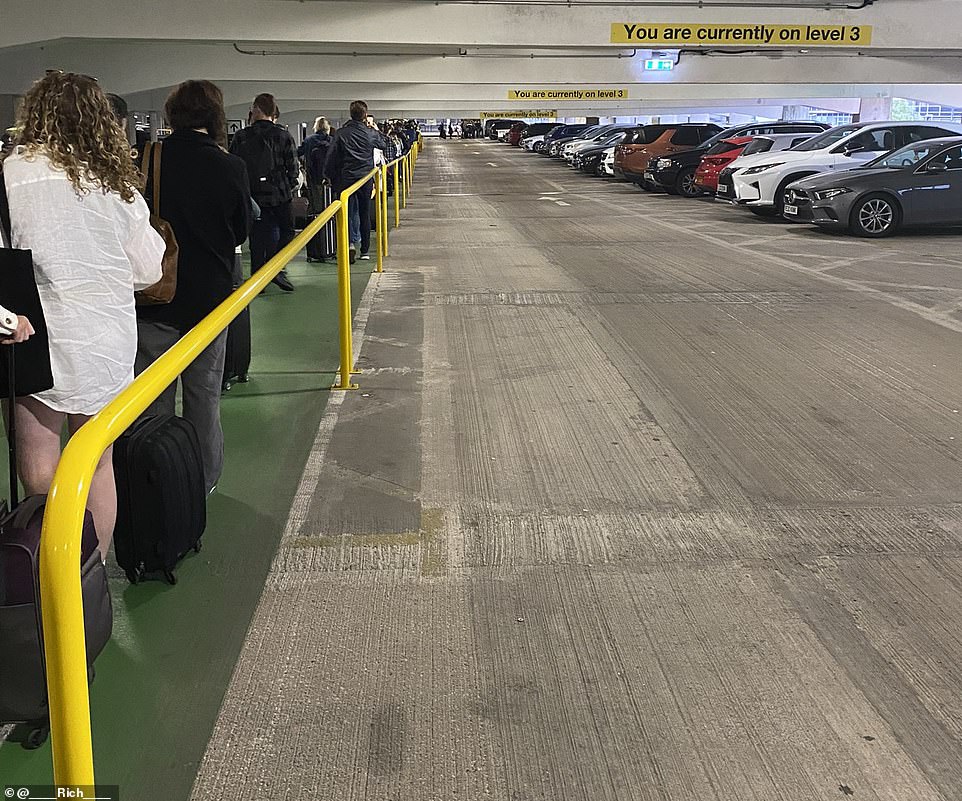 MANCHESTER AIRPORT: A passenger at Manchester said the security queue today is going ‘into the T3 multi storey car park’ 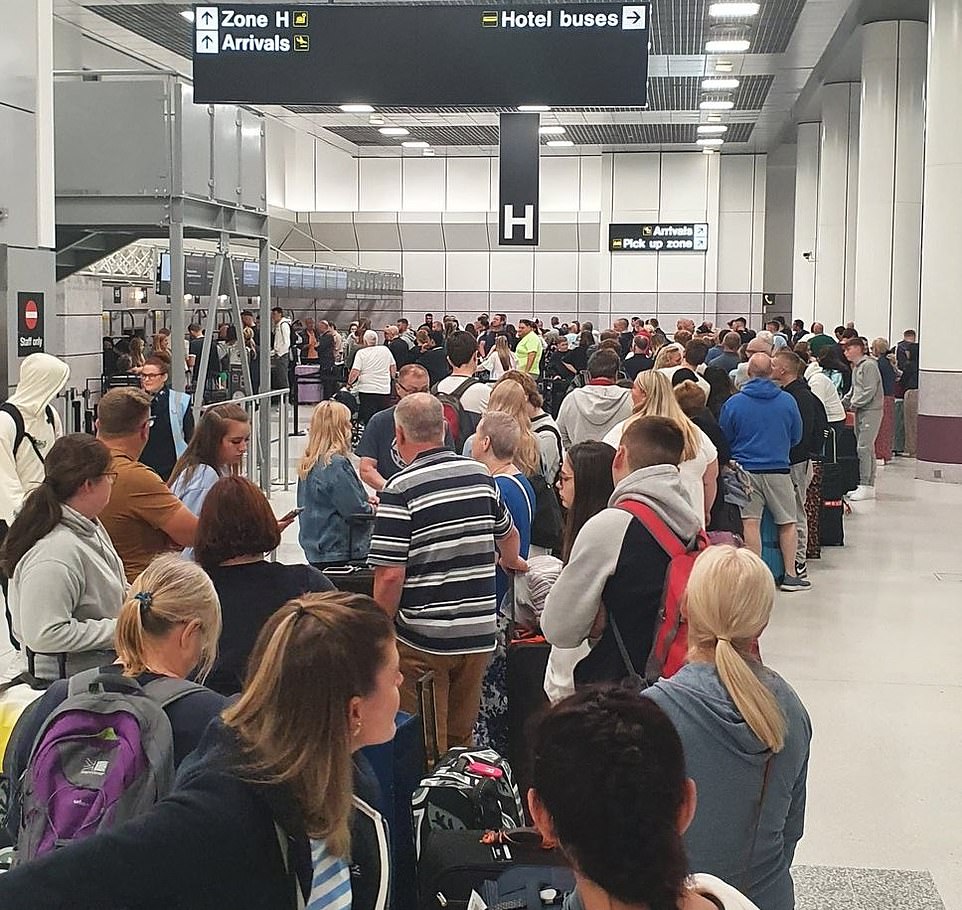 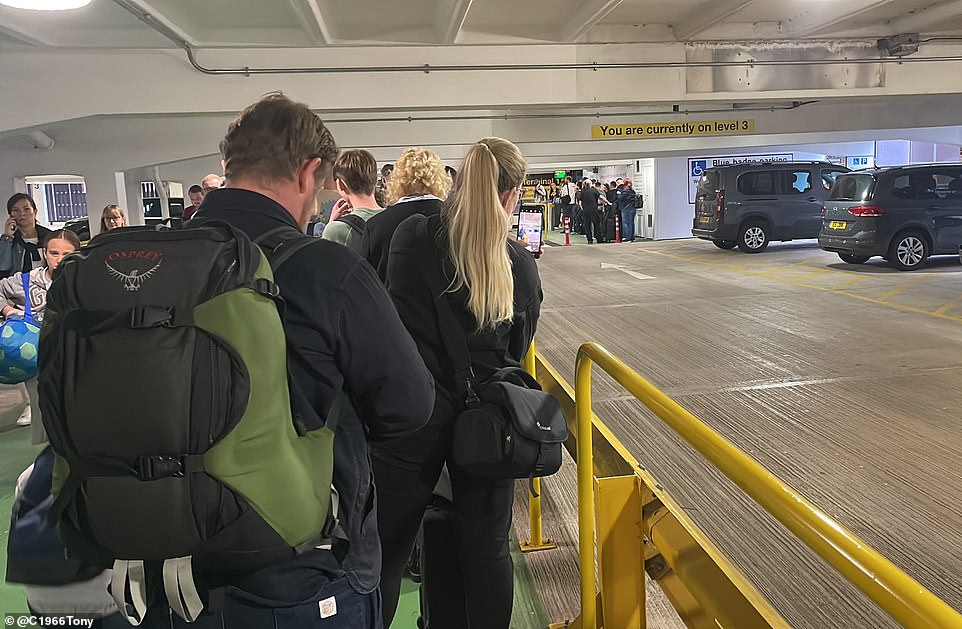 MANCHESTER AIRPORT: Queues in the car park at Manchester Airport this morning as people try to head abroad on holiday 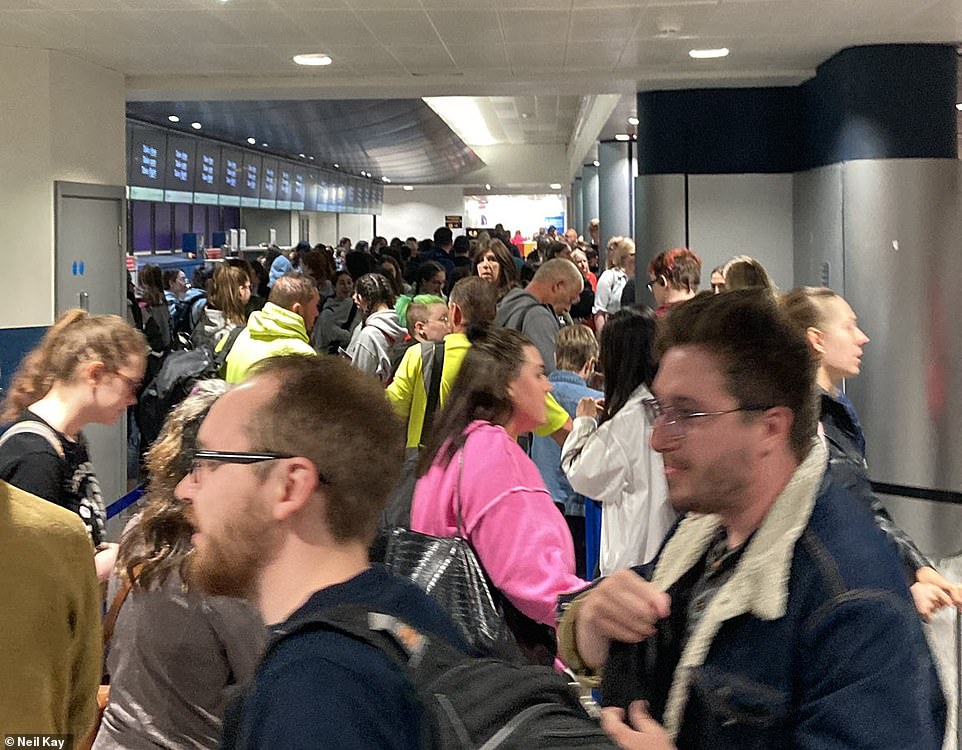 And a source at Heathrow told MailOnline: ‘There will be some queues during peak periods over the summer, but we are doing everything we can to ensure passengers get away on their journeys as smoothly as possible.’

Ryanair records busiest month ever in June as it flies 15.9m passengers

Ryanair had its busiest month ever in June as it flew 15.9million passengers, up from just 5.3million a year earlier and topping a previous high set in May.

Its load factor, which measures how well an airline is filling available seats, reached 95 per cent for the first time since the beginning of the pandemic.

The Irish airline, Europe’s largest by passenger numbers, said it operated over 88,500 flights in June as its load factor rose from 92 per cent a month earlier, when it flew 15.4 million passengers.

Ryanair’s load factor regularly reached at least 96 per cent a month before the pandemic and hit 97 per cent in June 2019.

Ryanair said last week that less than 2 per cent of its flights were affected by an initial wave of strikes by cabin crew unions in Belgium, Spain, Portugal, France and Italy. It added on Saturday that it expected ‘minimal (if any) disruption’ from 12 more strike days announced by some Spain-based cabin crew for later this month.

It comes after Heathrow faced another day of chaos yesterday as huge queues and lost luggage caused reported ‘flare ups’ between employees and holidaymakers.

Similar issues were described by those departing from both Gatwick and Stansted yesterday – although there were no early reports of issues at either this morning.

Heathrow said it did not recognise the picture described by travellers yesterday and that the airport had been ‘busy but flowing’.

Triple the number of passengers are due to fly in and out of Britain’s airports this summer compared with last year. But hundreds of flights are being delayed or cancelled as there are not enough staff to cope with the booming demand. British Airways flights from Heathrow are expected to bear the brunt of another round of cancellations this week.

It comes as 700 of the airline’s staff at the airport voted to strike later this month just as children start their school holidays.

One passenger described facing 90-minute at Heathrow Terminal 2 yesterday between arriving and getting through security.

Craig Lester, 49, claimed tensions had boiled over at times causing ‘flare ups’ between the public and staff.

The TV engineer from Devon, who was travelling to Shannon, Ireland, said: ‘There simply is not enough space to queue. At security it is lengthy wait times. I hate to see what it will look like during school holidays in August.’

Heathrow said the parts of the chain it operated were working fine, claiming that it was recording security waits no more than 20 to 30 minutes. Check-in and baggage handling meanwhile are the responsibility of the airlines, it said.

He said: ‘No-one visible on the ground to explain the carnage or sort out the mess, it seems like lots of luggage has not arrived with passengers and just been dumped.’ 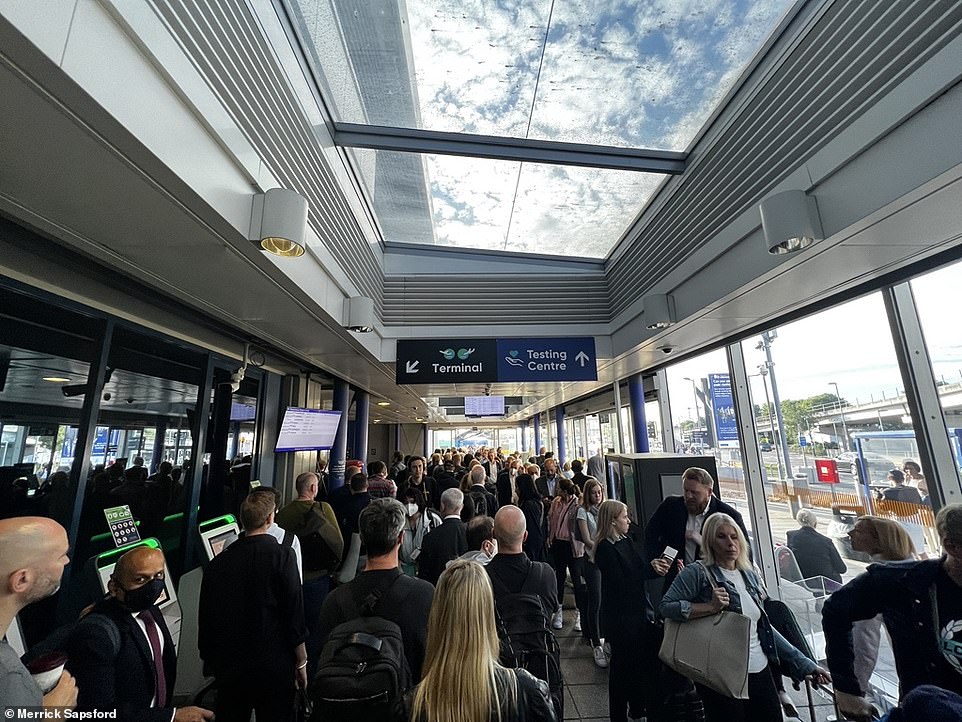 LONDON CITY AIRPORT: Those flying out of London City today described ‘utter chaos’ and an airport ‘totally out of control’ 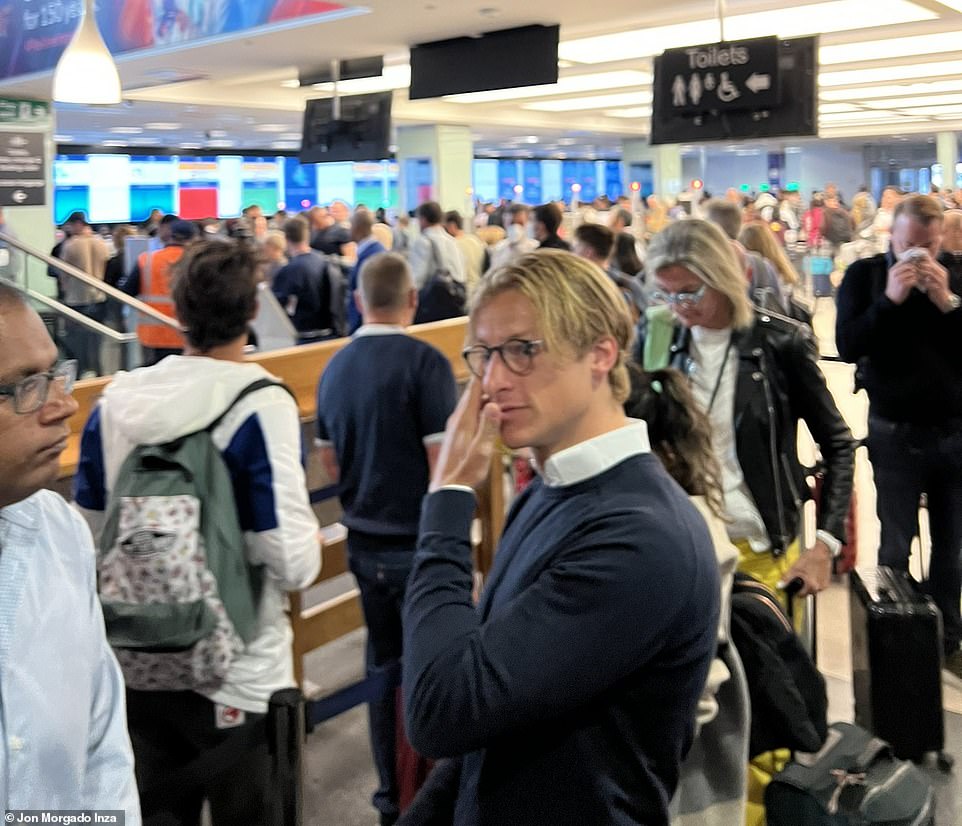 Stansted Airport reportedly saw similar issues yesterday with long queues just to get out of the train station and then again at check-in desks, where some people were spotted sleeping on the floor.

And a passenger at Gatwick yesterday told how there was only one person operating check-in and the lack of buses to take passengers to the plane meant they missed their departure slot. He tweeted: ‘queues, queues, queues everywhere!’

Airlines have until Friday to take advantage of a government ‘amnesty’ to the rules on airport slots allowing them to change schedules without facing a potential penalty.

Transport Secretary Grant Shapps is trying to alleviate flight disruption this summer to avert the mayhem seen over the Easter and Jubilee holidays. The Government has ordered the vetting centre carrying out checks on new recruits to prioritise airport staff to help plug the gaps quicker.

The Department for Transport said counter-terrorist and accreditation checks were now being completed in record times.

The GMB and Unite Unions are expected to set strike dates for the BA Heathrow staff for around July 22. The dispute is over a 10 per cent pay cut that check-in and ground-handling staff took during the Covid pandemic. The unions want the full pay reinstated.