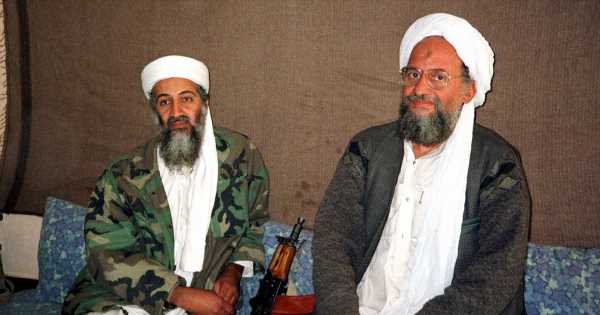 Al-Qaeda terror boss Ayman al-Zawahiri was slaughtered by the US in a brutal drone strike after CIA spooks spied on him for at least six months.

American President Joe Biden gave a speech about a "successful counterterrorism mission" at 7.30pm (12.30am UK time) yesterday (Monday, August 1) confirming the news that they had killed the 71-year-old Al-Qaeda chief – the man who succeeded Osama bin-Laden when he was killed by US leaders in 2011.

Al-Zawahiri was reportedly slaughtered by two Hellfire 'Ninja' missiles fitted with extending blades and fired from a CIA drone after the spy organisation tracked him for months.

The drone strike was carried out while he was standing on a balcony in his safe house, located in one of the wealthier areas of Kabul, the capital of Afghanistan. His wife, daughter and grandchildren were inside the property, but were unharmed.

Stating that "justice has been delivered", he said: “This terrorist leader is no more. People around the world no longer need to fear the vicious and determined killer.

President Biden's triumphant statement said: “We we make it clear again tonight. That no matter how long it takes, no matter where you hide. If you are a threat to our people, the United States will find you and take you out.”

In a statement to reporters, a senior Biden administration official had previously said: “Over the weekend, the United States conducted a counterterrorism operation against a significant Al Qaeda target in Afghanistan. The operation was successful and there were no civilian casualties."

President Biden confirmed that al-Zawahiri, a former doctor, played a role in the September 11 terror attacks, as well as being behind the bombing of the UUS Cole ship in 2000, and the United States embassy attacks in Kenya and Tanzania in 1998 – combined, he was responsible for the murders of 224 people, while more than 4,000 others were injured.

He had, at the time of his killing, a £20 million bounty on his head.

According to Sky's Mark Stone, Biden was “briefed last month” that they had found the terrorist at the safe house, and he gave the “green light” for the strike last week.

President Biden added: “He carved a trail of murder and violence against American citizens.”

Senator Ted Cruz, a member of the Senate Foreign Relations Committee, called the operation “an important accomplishment", adding: “This strike should be a message to terrorists near and far: if you conspire to kill Americans, we will find and kill you.”

Egyptian-born al-Zawahiri succeeded Bin Laden following the latter's death in 2011. Bin Laden was slaughtered in a mission carried out by US Navy Seals in Pakistan.

The 71-year-old appeared in a video last year commemorating the 20 year anniversary of the 9/11 terrorist attacks, despite rumours that he died months earlier.

While a new leader of the Taliban has not yet been appointed, it is thought that it will be be a formality as a clear chain of command is set out by the terror groups in secret in anticipation of incidents such as this.