Pro-life activist Pavel Stroilov was blasted by Mr Justice Hayden after helping on a fresh appeal to keep the gravely ill toddler alive.

The judge criticised Mr Stroilov's "malign hand" in a late-night telephone hearing with representatives for Alfie's family and doctors treating him at Liverpool's Alder Hey hospital.

The judge said the hospital had in fact provided "world class care" and called the behaviour of some of the Alfie's Army supporters “profoundly depressing to say the least".

Referring to a witness statement taken from Tom by Mr Stroilov, he said: “This does them more harm than it does them good. 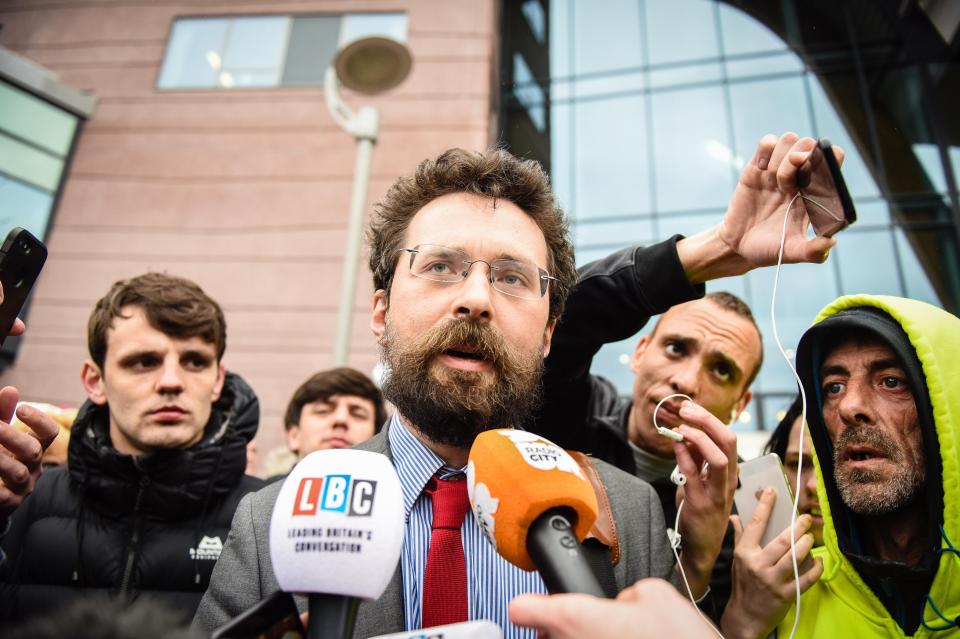 “It’s peppered with unhelpful, inappropriate language and is ultimately injurious to their own objectives.”

The judge did not name Mr Stroilov but called him a “fanatical and deluded young man" and said he "risked imprisonment for contempt of court with some of his legal advice".

Alfie's ventilator was turned off late on Monday after a legal bid to prolong his care and have him transferred to Italy was rejected.

Tom, 21, and Kate James, 20, lodged an urgent appeal last night after their son continued breathing on his own for 24 hours.

He has been in a "semi-vegetative state" for more than a year and is currently only receiving oxygen after life support was withdrawn.

The latest on Alfie Evans' case:

But he said it could be possible for the 23-month-old to have palliative care at home. Doctors will assess him over the next two days.

The judge said it was a chance for Alfie's parents to have “some special time to spend with their son.

"That is a shaft of sunshine in a case which has been rather bleak.

“It’s a sensitive situation with a group of professionals who are all doing their best.”

Today Tom and Kate will challenge the ruling at the Court of Appeal today.

The Christian Legal Centre, which has been representing the family for around two weeks, said the case will be heard at 2pm.

Tom said aircraft are on standby to take Alfie to the Vatican's children's hospital if judges give the OK.

"He hasn't had any sign of pain and is sustaining life like any other kid for the past 36 hours. It's totally unexpected.

"I believe I am getting closer to getting him home.

"We would be happy with that but be more blessed to get him to Italy."

It comes after the Pope personally intervened in the case and met Tom in Rome, and the Italian ambassador granted Alfie citizenship in a bid to have him transferred from Liverpool.

Mr Stroilov, who is not a qualified lawyer, is the author of a book Behind The Desert Storm which was blasted as "full of nonsense" by the Journal Of Cold War Studies, reports The Times.

A review said it was "devoid of scholarly analysis" and borrowed from wacky conspiracy theories.

The Christian Legal Centre is part of fundamentalist campaign group Christian Concern which has stoked controversy with hardline views on abortion and homosexuality.

May 9, 2016: Alfie is born in Liverpool to parents Tom Evans and Kate James.

December 2016: Alfie is taken to Alder Hey Children's Hospital after suffering seizures. He will spend the next 12 months there.

December 11, 2017: The hospital and family disagree over Alfie's treatment, with his parents saying that the hospital applied to the High Court to remove parental rights and withdraw ventilation.

February 1, 2018: A hearing begins at the High Court in Liverpool in which lawyers acting for the hospital claim further treatment for Alfie is unkind and inhumane.

February 2: One of Alfie's doctors tells the judge there is "no hope" for the youngster, who is in a semi-vegetative state from a degenerative neurological condition doctors have not been able to definitively diagnose.

February 20: Mr Justice Hayden rules in favour of the hospital and accepts medical evidence that further treatment would be futile.

March 28: The European Court of Human Rights also rejects a request from the family to intervene.

April 23: The ECHR rejects a last-ditch appeal. Supporters storm the hospital. Alfie is granted Italian citizenship. His life support is turned off at 9.17pm.

April 24: Alfie is still breathing on his own and has had oxygen and water, his father tells supporters.

April 25: Alfie's parents vow to take their case to the Court of Appeal in a fresh bid to take him to Italy.

Roger Kiska, the group's legal counsel, said of the Alfie case: "We think it sets a very dangerous precedent when the state determines whether the quality of someone's life is good enough for them to live or not. That should be a determination made by the parents."

But the family's previous lawyer accused the CLC of picking on "easy prey".

Mary Holmes of MSB Solicitors in Liverpool told The Times: "These people I don't believe are in it because they love Alfie. When this case is over they'll move on to the next. Or they'll find some other cause they can ride on the back of."

He said: "We believe that Alfie deserves a fighting chance. The parents have every reason to believe he can get treatment abroad".

Andrea Minichiello Williams, chief executive of Christian Concern, said: "Alfie continues to fight for his life in an extraordinary way, as do his parents and our lawyers."