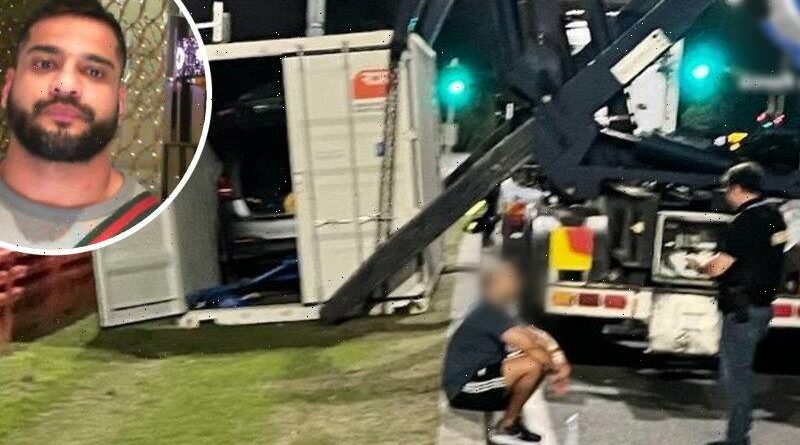 Fugitive and alleged drug kingpin Mostafa Baluch has been found hiding inside a Mercedes being transported in a truck travelling to Queensland, after more than two weeks on the run.

Police say the 33-year-old was “desperate to leave Australia” after he broke off his ankle monitor and fled just days after being granted bail. He was last seen at Bayview, on Sydney’s northern beaches, on October 25. 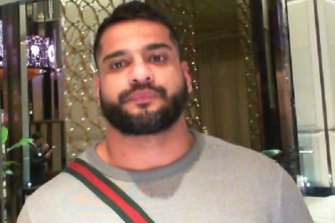 Mostafa Baluch, charged over his alleged role in a drug importation syndicate, was wanted for allegedly breaching bail.

He was the target of a domestic and international manhunt before Queensland Police stopped a truck as it crossed the border into Queensland, at Tweed Heads, about 1am on Wednesday.

“Officers searched the container on the back of the truck, where they located the 33-year-old man hiding inside a grey Mercedes,” NSW Police said in a statement.

Mr Baluch was arrested and taken to Southport watch house.

Organised crime squad detectives are travelling to Queensland to seek the man’s extradition to NSW when he appears at Southport Magistrates Court on Wednesday. 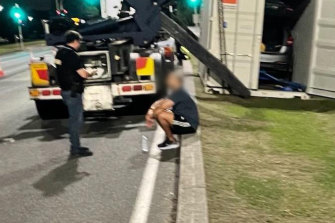 Mostafa Baluch, who has been on the run for more than two weeks, was arrested at the Queensland border. Credit:NSW Police

Detective Superintendent Rob Critchlow said Mr Baluch’s arrest came after NSW Police received a tip-off from federal police that he was planning to cross the border in a truck.

He said Queensland Police stopped dozens of trucks near the border before noticing a truck with a container on the back that wasn’t properly secured.

“The absence of locks on the trailer was suspicious,” he said.

An officer knocked on the side of the container before someone inside banged back and Mr Baluch was found hiding in a car inside the truck. 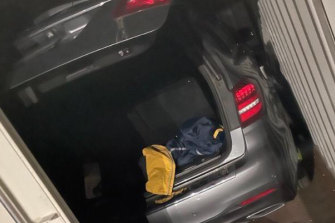 Superintendent Critchlow said Mr Baluch was desperate to leave Australia and meet up with associates overseas, potentially in Europe.

“We knew that people overseas were waiting for him to come and join with them,” he said. “We were determined he wouldn’t leave Australia.”

“He had a couple of helpers, but he had a lot of people against him,” he said.

“The attention from the community really turned the criminal element against him.”

Mr Baluch is accused of being a well-connected player in Sydney organised crime. Police allege he spoke to associates on the app An0m of having access to $30 million in personal funds and taking control of the local cocaine market before he was arrested, the Herald revealed last month.

His latest arrest came after police last week raided two south-west Sydney homes, including one thought to be a safe house for a criminal syndicate, during the search for the fugitive.

Police found more than $250,000 cash, about 200 grams of cocaine, 485 grams of an unknown substance, mobile phones and an electronic money counter during the searches of homes at Potts Hill and Yagoona.

“We know for sure he had been at some of those addresses, and we were close behind him all the way,” he said.

“Mr Baluch has opened opportunities we didn’t have before. It’s given us great potential to really dissolve a major trafficking syndicate.”

Police Minister David Elliott said: “I’d have nightmares if even started to think about it.”

Mr Elliott praised the efforts of police in tracking down Mr Baluch, saying it was a wonderful result that showed people linked to the drug trade would be held accountable in Australia.

A wealthy restaurateur, Mr Baluch was charged in June over his alleged role in a ploy to import 900 kilograms of cocaine from Ecuador.

He was granted bail on October 22, in an application opposed by police, days before he went on the run after providing $4 million surety through a property that now stands to be forfeited.

“My apologies to the international law enforcement agencies for putting them through the anxiety that they went through thinking that we would never see him again,” he said on 2GB. “This guy was allegedly part of an international drug ring which was at a level we had never seen before.”