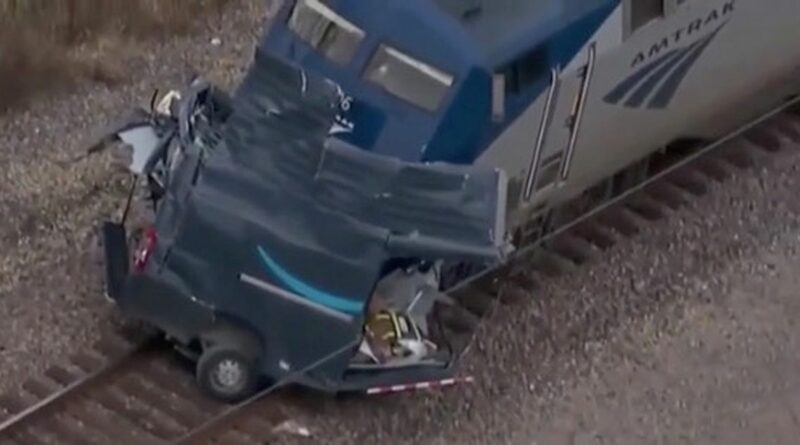 An Amazon delivery driver's van was split in two by a train speeding at 80mph as he drove over a railway line.

Alexander Evans, 33, counts himself lucky to be alive after his vehicle was smashed apart in Milwaukee, Wisconsin on his birthday, last Wednesday.

The dad-of-two did not initially hear the Amtrak train's warning horn as he is deaf in his left ear and explained he could not see it because his view was obstructed.

Speaking after escaping death by a matter of inches, Alexander fears it will not be the last time an incident like his happens unless more safety measures are introduced.

Visibly shaken, Alexander told ABC: "Literally it was like one long beep, like a horn from the train, and I put my foot on the gas. I was like, I don't know how far I'm going to get away from him."

By marking out his route from dropping off a parcel at a house, Alexander illustrated on a map how the tracks are parallel to the road before the crossing, limiting his sight of oncoming trains.

He said: "I just tried, I made a look as I was going down the hill to swerve. I didn’t see anything. He was on my left side."

Shocking images of the collision and damage to his Amazon Prime van, cleanly sliced in half, show just how close the delivery driver was to being killed, LadBible reports.

When told witnesses and viewers of the crash are amazed Alexander survived, he replied: "I still can't believe it myself right now as well."

For more incredible stories from the Daily Star, make sure you sign up for one of our newsletters here.

The crossing has no lights or warning sounds, let alone an automated gate, all devices Alexander thinks could have prevented the collision and ones in the future.

Alexander's wife thanked God on Facebook for his survival.

Sharing snaps of the near-fatal crash, she wrote: "I thank God for his covering over my husband yesterday! His birthday, 11/10, could have definitely been his last day, but God said otherwise.

"With this being said, changes need to be made in Jefferson County, WI, to make sure all train tracks crossing have warning signals, gates, lights, and or visible signs (specifically from private drives with low visibility of upcoming trains) that will help protect citizens or in his case a delivery driver from Amtrak's traveling up to speeds of 120 miles per hour. My husband's life is worth it!"

His wife later added on social media: "He has a long road to recovery, but he is ALIVE."