The 54-year-old – one of Theresa May's most senior allies – rang the PM to admit she had misled Parliament after it emerged she was fully aware of deportation targets. 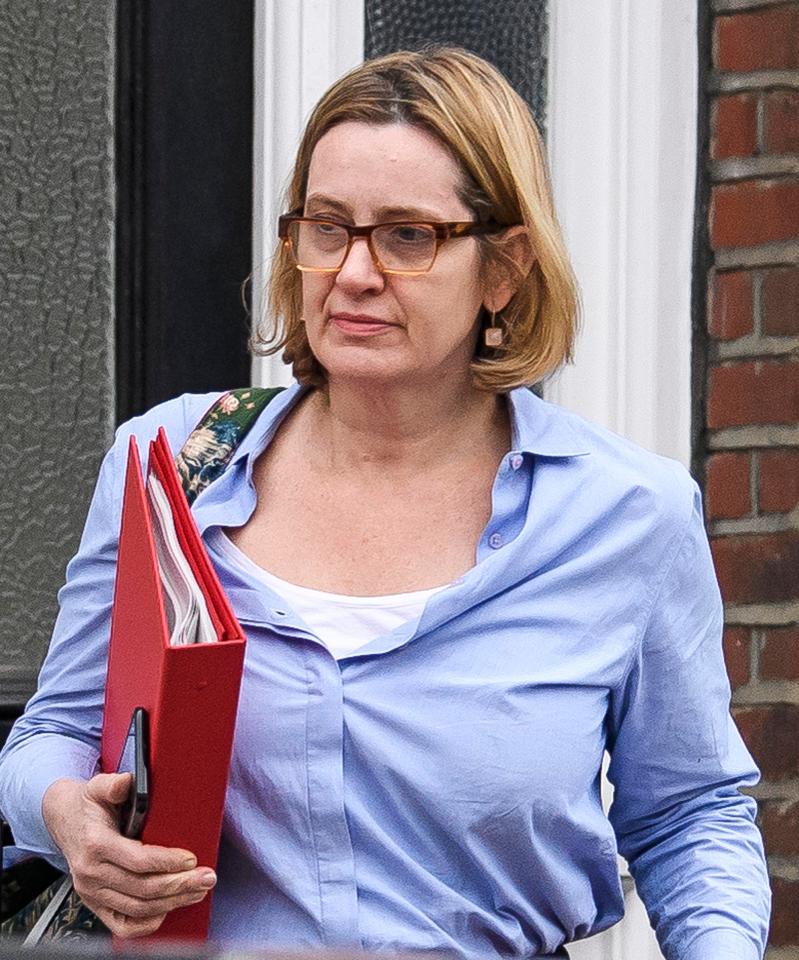 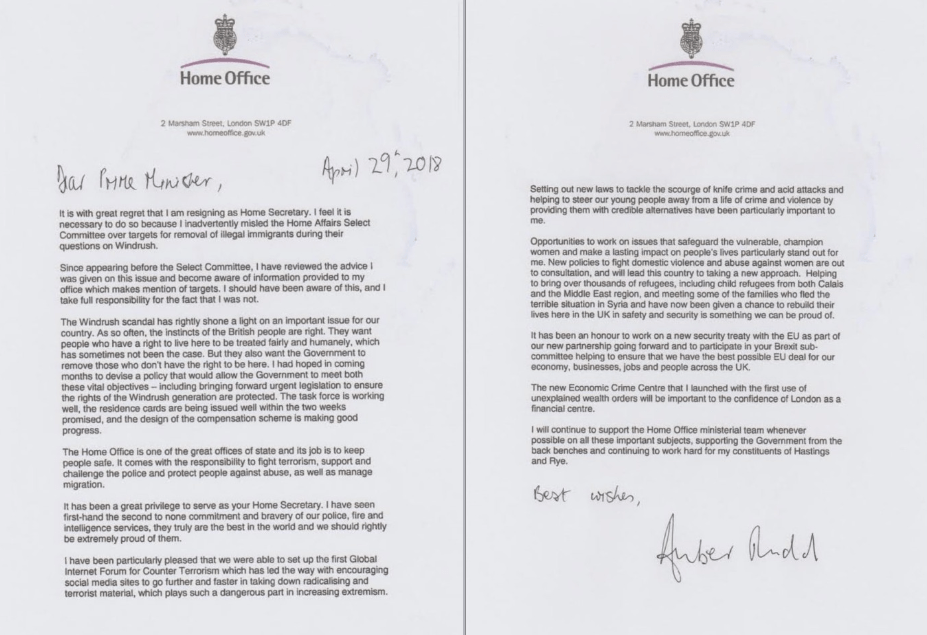 She buckled under mounting pressure after a thorough sweep of Home Office documents over the weekend revealed targets for deporting illegal migrants do exist – despite her telling a Commons committee they didn't.

She told the PM she “should have been aware” of the targets before writing it had been “a great privilege” to serve in the job.

In her reply, Mrs May said she was “very sorry” to receive her resignation, but she “understands” her reasons.

The move is a massive blow for the PM, who had declared her "full confidence" in Ms Rudd.

It also significantly increases pressure on the Prime Minister herself – with critics accusing her of running "a government of chaos".

Communities Secretary Sajid Javid is the bookies' 3/1 favourite. Leading Brexiteer and Environment Secretary Michael Gove is also being touted as one of the front runners. 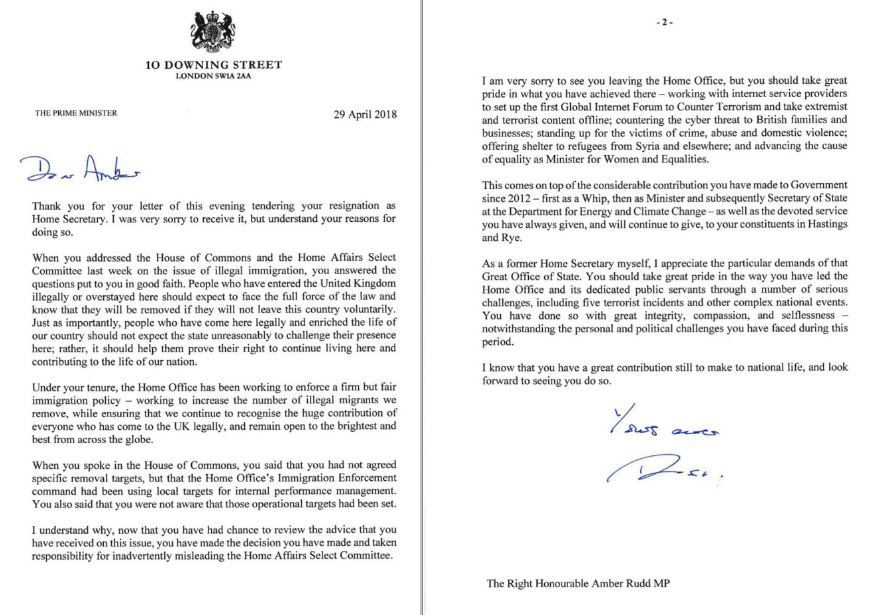 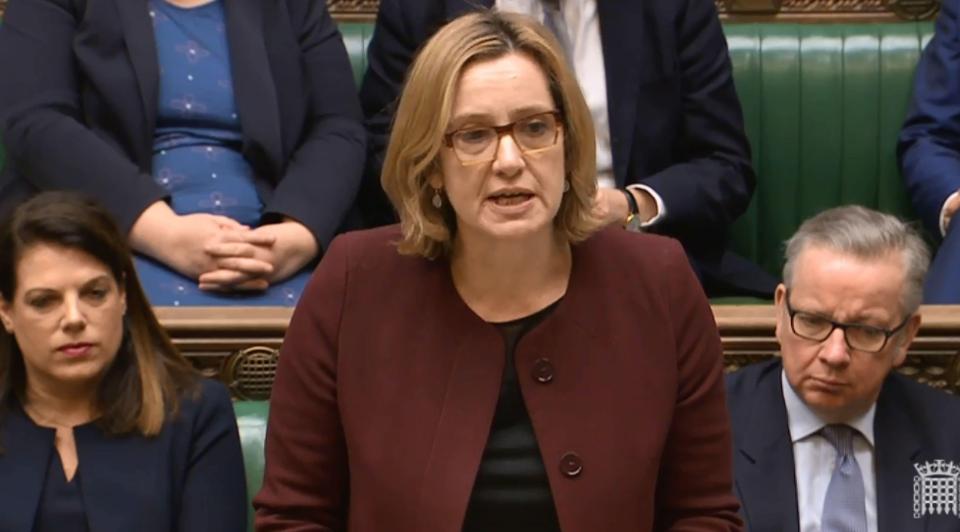 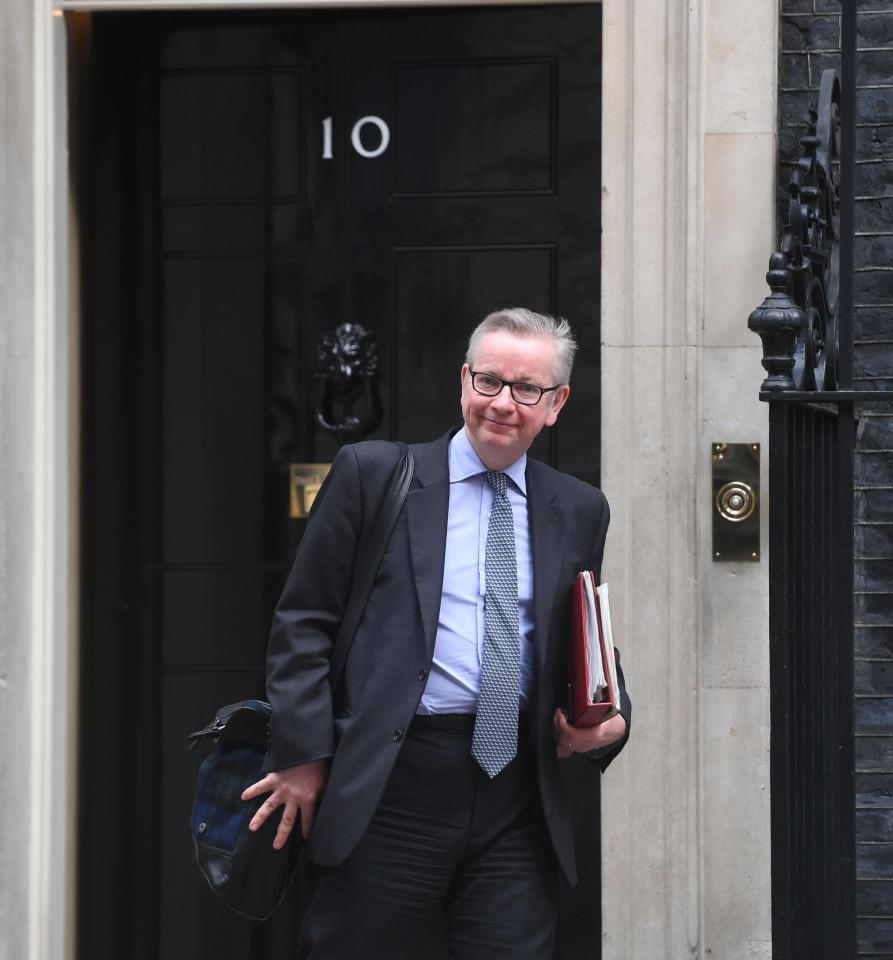 Today’s Commons grilling was due to be the fourth time Ms Rudd would have been hauled in front MPs, having already apologised twice for the Windrush scandal following her initial statement.

The pressure on the embattled MP to stand down increased after she said the government didn't have targets for deporting people, only for a memo to emerge mentioning specific targets.

Ms Rudd referred to the enforced removals hike as an “aim”, which she dubbed “ambitious but deliverable”.

No10 said she still insists she was unaware of the targets, but now accepts she inadvertently told an untruth to MPs and must take responsibility for that.

A BREAKDOWN OF THE WINDRUSH SCANDAL

Downing Street turns down a plea from Commonwealth leaders to discuss the immigration problems of the Windrush generation.

Theresa May later agrees to a meeting and Amber Rudd apologises for the “appalling” way people had been treated.

It emerges that thousands of disembarkation cards dating back to the 1950s were destroyed in 2010 when Mrs May was home secretary.

Labour leaders call for Amber Rudd to resign. Mrs May tells Jeremy Corbyn at PMQs that the decision to destroy the cards took place in 2009 under the former Labour government.

Albert Thompson, 63, who was denied free cancer treatment because of his immigration status, speaks out after hearing Mrs May announce he would be “receiving the treatment he needs”.

Rudd makes an apology to Parliament and says the Home Office had “lost sight of individuals” and become “too concerned with policy”.

In a statement to the Commons, Rudd vows to change the culture of the Home Office.

Rudd again apologises for failing to grasp the scale of the problem.

But she also tells the home affairs select committee there are no targets for enforced removals of illegal immigrants.

The Home Secretary is forced into a humiliating climb-down and admits officials did have targets for removals, but she did not know about them.

Taking to Twitter, Rudd makes a late night apology for not being aware of documents, leaked to the Guardian, which set out immigration removal targets.

She says: “I wasn’t aware of specific removal targets. I accept I should have been and I’m sorry that I wasn’t.

"I didn’t see the leaked document, although it was copied to my office as many documents are.”

A letter from Amber Rudd to Theresa May in which she mentions increasing the number of enforced removals by more than 10% over the next few years” is published by Guardian. Rudd resigns just before 10pm.

Tory MPs rallied behind Ms Rudd last night, commending her work as Home Secretary, while Labour accused No10 of using Ms Rudd as a protective shield.

"A fine colleague who did a great job during last year's terrorist attacks and cares deeply about the people she serves.

Michael Gove said: "I'm so sad about Amber's departure from government – she was a huge asset – brave, principled, thoughtful, humane, considerate and always thinking of the impact of policy on the vulnerable – I hope Amber will be back soon – we need her." 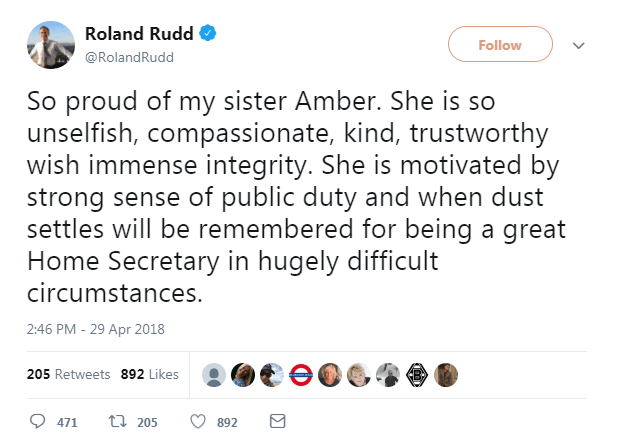 Sajid Javid tweeted: "Very sad that Amber is leaving Government. A huge talent that will no doubt be back in Cabinet soon, helping to strengthen our great nation."

"She is so unselfish, compassionate, kind, trustworthy [with such] immense integrity.

"She is motivated by strong sense of public duty and when dust settles will be remembered for being a great Home Secretary in hugely difficult circumstances."

On Friday, Theresa May declared her 'full confidence' in Ms Rudd 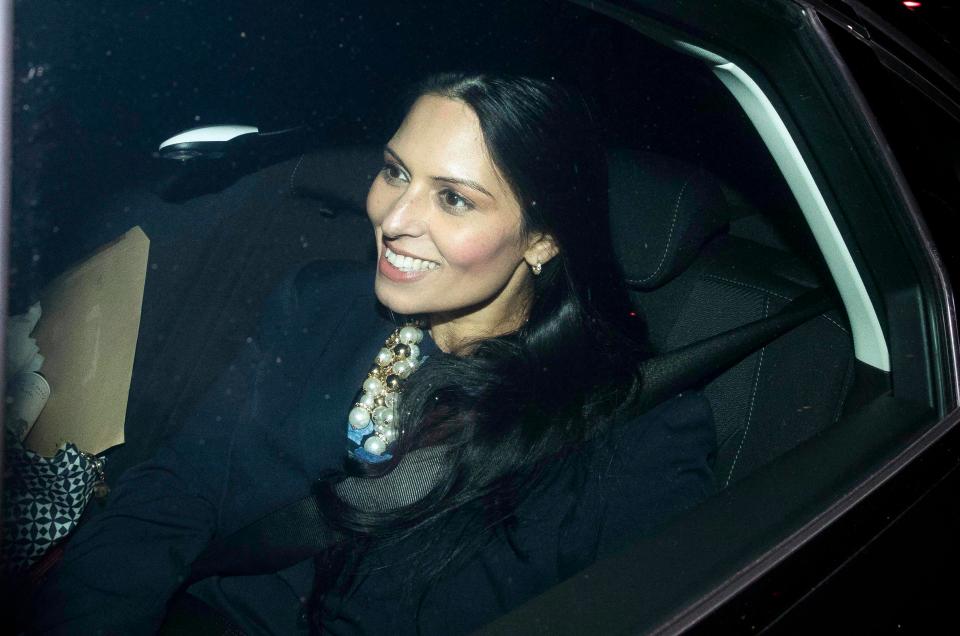 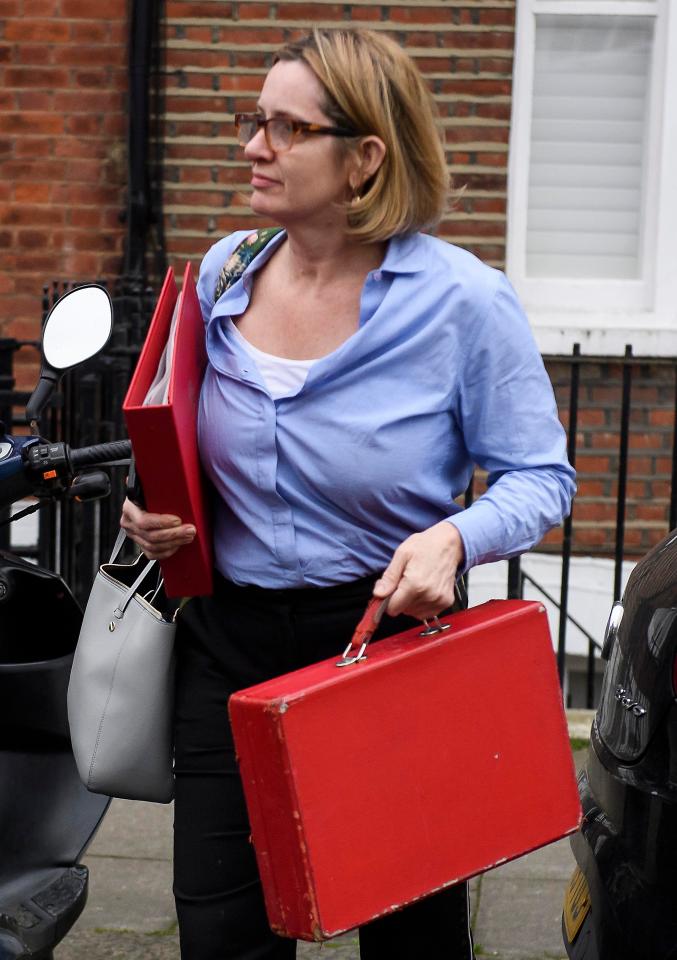 The PM has now lost three of her most senior Cabinet ministers in the last six months – leading critics last night to accuse her of running "a government of chaos".

Development Secretary Priti Patel also resigned in November after carrying out foreign policy with Israel behind Mrs May's back.

Why has the Windrush generation come under threat?

ANYONE who migrated to Britain from the Commonwealth before January 1, 1973 and has carried on living here since has the legal right to stay permanently.

But the Government failed to keep a record of who was living in Britain at the time – causing problems for them decades later.

They are all eligible for a UK passport, but some have chosen never to apply for one because they didn’t wish to travel abroad.

In the past few years, that has become an issue because of a Government crackdown on illegal immigration which means employers and landlords must check migrants’ paperwork to ensure they have the right to be in Britain.

Members of the Windrush generation can get a document proving they are here legally – at a cost of £229.

To acquire it, they must dig out paperwork such as payslips, energy bills or bank statements from each year they have lived in the UK.

It means that anyone who hasn’t kept a comprehensive archive of their documents could face difficulty in proving their right to stay.

It was the PM herself who failed to grant a special exemption to the Windrush generation when she devised a tough new environment for illegal immigrants in 2014 as the then Home Secretary.

Many children of Caribbean migrants from 1948 to 1971 never applied for British citizenship and have since been labelled illegal aliens by uncaring Home Office staff under the new 'hostile environment' regime.

Labour deputy leader Tom Watson said: "I see Amber Rudd is carrying the can for the person originally responsible for this scandal – Theresa May."

SHE rose rapidly through the ranks of the Tory party and was tipped as a future Prime Minister — but Amber Rudd saw those hopes come crashing down last night.

She was first elected as the Conservative MP for Hastings and Rye in 2010, having lived in the East Sussex constituency since 2007.

Her career saw her hold ministerial positions in the Treasury and the Department of Energy and Climate Change before becoming Energy Secretary in 2015.

And when Theresa May became Prime Minister after David Cameron quit following the result of the referendum, Ms Rudd succeeded her as Home Secretary.

But despite her lofty position, she needed a recount to hang  on to her seat in last year’s snap General Election.

She  has campaigned to see more women in Cabinet posts and is the chairwoman of the all-party parliamentary group for sex equality.

She has also served as the vice-chair of the parliamentary committee on female genital mutilation.

Ms Rudd married the writer and critic A.A. Gill in 1990 and they had two children before separating in 1995.

Before entering politics she worked in investment banking in London and New York as well as setting up a recruitment business.

She worked as the “aristocracy co-ordinator” on the hit 1994 film Four Weddings And A Funeral —  and even made a fleeting appearance in it.

The PM is now forced into her second Cabinet reshuffle of the year sparking further criticism about her "chaotic" government.

Ms Rudd’s exit also upsetting the delicate Cabinet balance between Leavers and Remainers ahead of a crucial meeting of the Brexit “war cabinet” on Wednesday.
No10 will fear pro-EU Ms Rudd on the backbenches as she could become a rebellion leader.