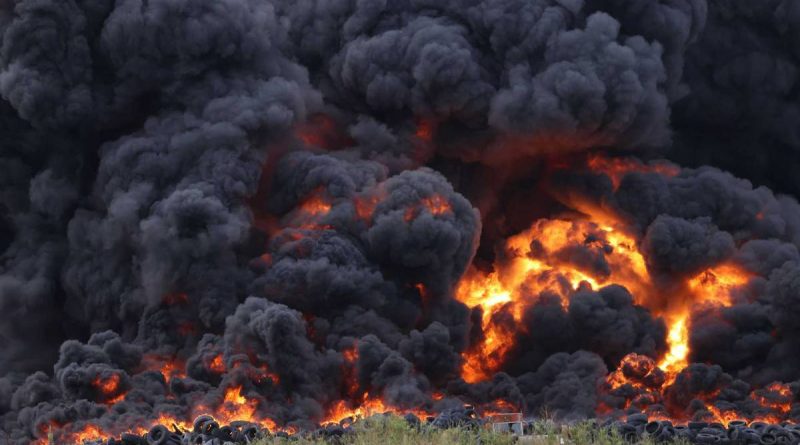 A man charged with arson after a massive fire at a North Canterbury stockpile of tens of thousands of tyres has been granted interim name suppression.

Emergency services were called to the blaze on Racecourse Rd outside Amberley at about 3.10pm on Friday.

A man in his 60s charged with arson was due to appear at Christchurch District Court today.

However, he was granted a registrar’s remand without having to appear in court before a judge.

He was granted interim name suppression and will be back in court on February 23.

A public health warning was issued amid concerns of toxic substances billowing into the air during the fire.

A Herald reporter at the scene on Friday said “enormous flames more than 20m high” could be seen as dozens of firefighters battle the raging fire.

Thick black smoke plumes were seen fanning into the sky.

The “very, very hot” blaze was at the site of the Amberley tyre stockpile which has been controversial over the years.

Environment Canterbury have been working closely with the Hurunui District Council in recent times to ensure the removal of the pile.

One Amberley local who went down to watch the dramatic fiery action was frustrated that “this was always going to happen”.

“It’s a shame that this is the second fire here and the authorities have tried for years to tidy this all up,” he said.

“People are pretty upset by it all, especially with all the pollution.

“I think the fire guys will be here for days dealing with this.

Residents have since criticised authorities for failing to clean up an illegal mountain of tyres, estimated at around 160,000.

Accountability Action founder Julia McLean yesterday said there has been a complete failure to take action.

She said it is critical that toxic debris is removed, as the site is beside the drinking water supply.

A letter outlining the concerns has been sent to the Environment Minister David Parker, and ECan leaders Jenny Hughey and Stefanie Rixecker.