Ambulances are waiting up to five hours to transfer patients to A&E at a Kent hospital, it has been claimed, amid a surge in coronavirus cases.

The number of Covid patients being treated at Medway Maritime Hospital soared by 82% last week, when almost 100 people were under the care of health staff, compared to just 52 the week before.

As a result, ambulance handovers are taking a lot longer, with some having to wait several hours before being seen by medics, according to the HSJ. 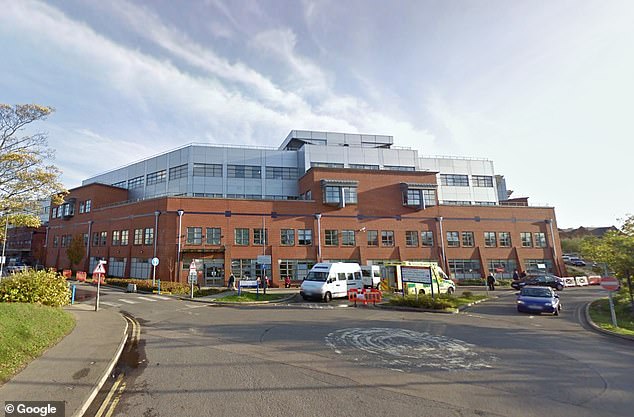 This is despite updated NHS guidance published earlier this year stating that handovers must be ‘reliably completed within 15 minutes of arrival’, adding that any delays must be ‘rare’ and ‘the result of an extraordinary peak in demand’.

The long waits are due to more patients across the hospital and problems with moving others onto care homes, reports suggest.

Local health bosses have admitted that patients had to wait longer than usual earlier this week, and insisted hospitals and the wider NHS are working ‘tirelessly’ to meet increasing levels of demand and minimise delays.

It comes as Britain’s official coronavirus death toll passed the grim milestone of 50,000 yesterday after health chiefs announced another 595 victims in the highest daily count since May.

Boris Johnson said the figures was a stark reminder that the UK ‘was not out of the woods yet’ despite promising news about a vaccine earlier this week.

Officials say Covid fatalities will continue to rise for ‘several weeks’ due to high infection rates though October.

It takes about three weeks for infected patients to become severely ill and eventually succumb to the virus. The PM labelled every death a tragedy, saying ‘we mourn everybody’s who’s gone’.

But despite the gloomy warnings of thousands more deaths, the silver lining is that daily cases are down nationally week on week.

A total of 22,950 new infections were recorded today — which is 8.8 per cent lower than the 25,177 that were registered last Wednesday.

The figures come after a catalogue of data has suggested that lockdown may have been a rash move and that the country’s outbreak appeared to be slowing down already thanks to the three-tier local lockdown system imposed in mid-October. 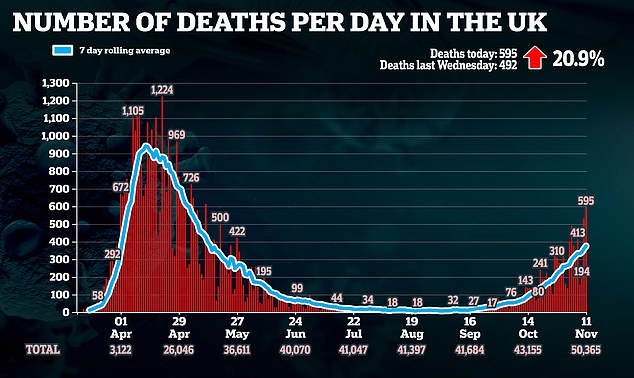 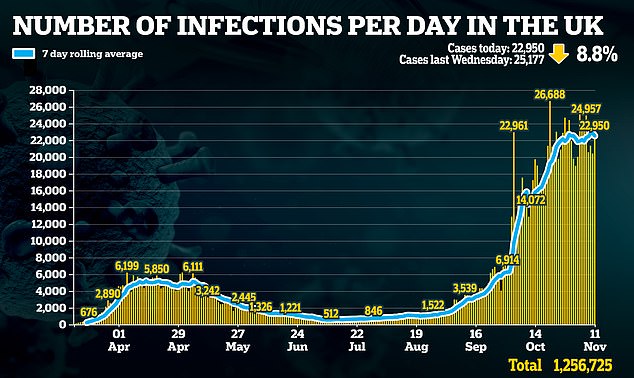 Department of Health figures show the UK’s official death toll now stands at 50,365, with yesterday’s figure the highest recorded in a single day since May 12 – when there were 614 fatalities.

It comes after the Prime Minister warned that a vaccine will not deliver a ‘knockout blow’ to coronavirus as Tories insisted he must not use the prospect of jabs to keep the country in lockdown longer.

At a bad-tempered PMQs session, Mr Johnson welcomed the news Pfizer’s vaccine had been 90 per cent effective in early trials.

But he gave a stern message to the public that they should not expect an early end to the blanket restrictions, despite claims it could start being rolled out by Christmas.

Britain is getting ready to launch the biggest immunisation drive in its history, with the NHS and Army on standby to start deploying millions of doses of any approved coronavirus vaccine by December 1.

Medway NHS Foundation Trust has been approached for comment.