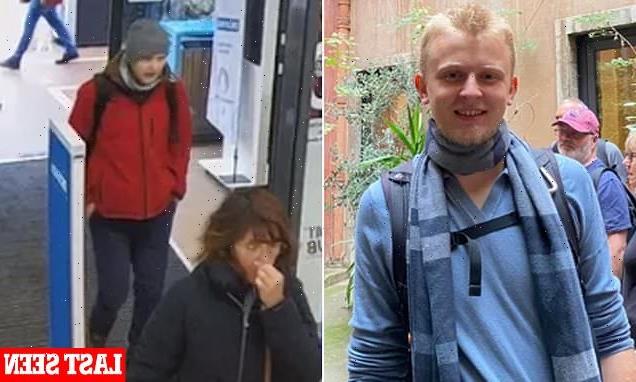 American student, 22, missing in France ‘was having a hard time making friends’: Family fumes at foreign police for not giving them more information as they beg their son to come home for Christmas

The American student missing in France was having a hard time making friends and had told loved ones he felt ‘underprepared’ in the country before he vanished, according to French authorities.

Kenneth DeLand, 22, has not been seen since December 3, when he was spotted shopping in a store in Montelimar. The 22-year-old is due to fly back to New York for the holidays with his family on December 15 but they are growing increasingly worried for his safety.

A prosecutor in France told CNN that Kenneth had been struggling to make friends.

‘The young man reportedly told several people that he had arrived in France underprepared and was having difficulty making friends,’ prosecutor Eric Vaillant said.

The last time they heard from him as on November 27. Since then, he has been spotted in the store once, but nowhere else. 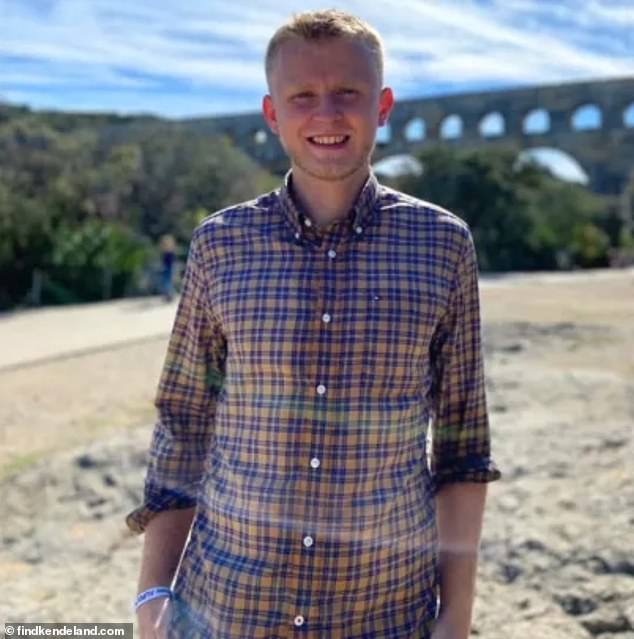 Kenneth DeLand, 22, has not been seen since December 3, when he was spotted shopping in a store in Montelimar

Ken, 22, was last seen at a sporting goods store in the south of France nine days ago 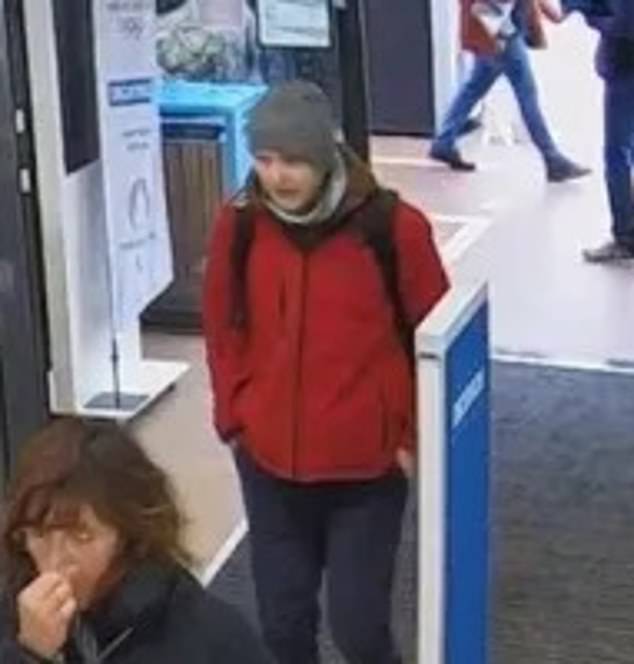 Surveillance footage shows the college student (pictured entering the store in a red jacket) in his last known appearance. DeLand’s family has launched a website to track him down

Kenneth has been studying at The University of Grenoble Alpes as part of a study-abroad program. He had been living with a host family, but they have not been named.

His parents are also growing increasingly frustrated with the French authorities, who are refusing to share pieces of the investigation, citing privacy laws.

They say that because Kenneth is an adult, they are bound not to share certain pieces of information with his family.

The family is now warning others with children studying overseas that they must be aware of the laws. 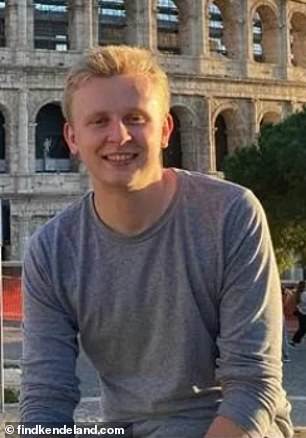 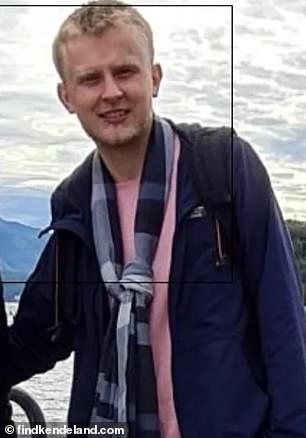 ‘Kids of that age are fiercely independent. They want to get out and explore the world. No problem.

‘I don’t know all about the legalities and whatnot… I’m just a parent that’s concerned about the whereabouts of my kid, obviously.’

On December 3, Kenneth was spotted on surveillance cameras at a sporting goods store in Montelimar.

That is the final known sighting of Ken, as his family refer to him.

His mom said she messages her son every day: ‘I say Kenny, Kenny just call me. Just pick up the phone, you can talk to me about anything. That’s what I text him, call me, text me, anything.’ 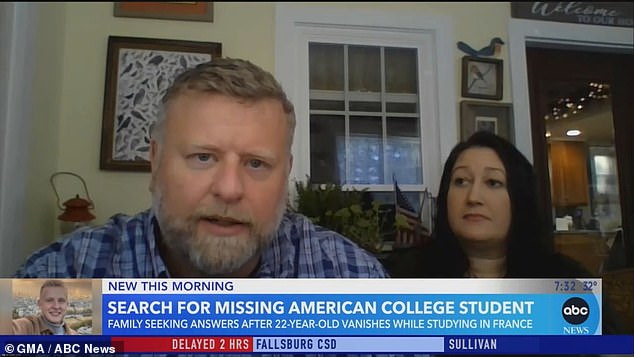 Ken’s father, pictured left, said: ‘It’s not characteristic of Kenny to not reach out to us and let us know what’s going on.’ 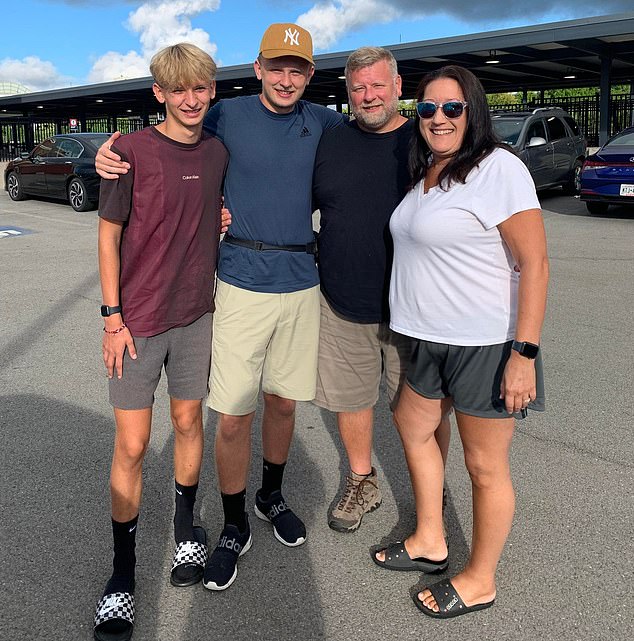 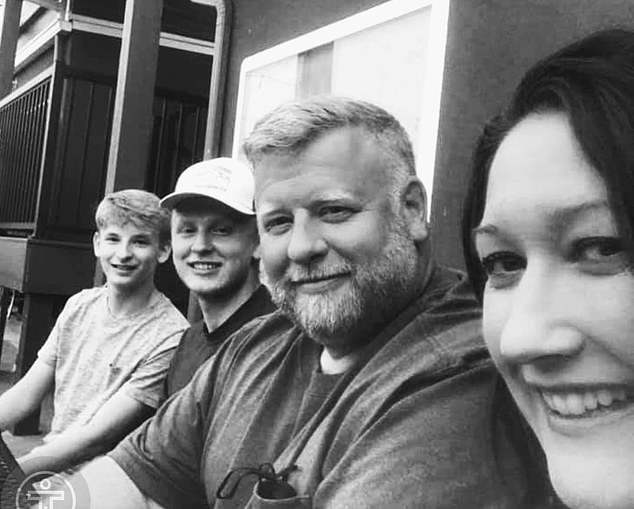 His family was informed their son was missing by a college liaison worker who contacted them after he failed to report to class and didn’t return to his host family.

Ken’s mom, Carol Laws, said the college filed a missing persons report because they hadn’t seen him for 24 hours.

‘I’m not there I’m here, thousands of miles away,’ Laws said.

His father, Kenneth DeLand Sr, said: ‘It’s not characteristic of Kenny to not reach out to us and let us know what’s going on.’

‘If anybody has a way to help us and find him, help us. With the officials, please help us.’

She said she still messages her son every day: ‘I say Kenny, Kenny just call me. Just pick up the phone, you can talk to me about anything. That’s what I text him, call me, text me, anything,’ his mother said in an appeal today.

Ken’s father said his son was enjoying his time in France, adding: ‘He loves to travel so this trip has been something that he’s really looked forward to.’

The senior at St John Fisher University in Rochester, New York has spent the past few months studying at the University of Grenoble Alpes.

The family have now launched a website to raise awareness about his missing status.

He has been listed on the French missing persons list.

The student was last seen wearing a red jacket, scarf, a gray beanie, blue pants, a black backpack and sneakers. He is about six feet tall and 190 pounds.