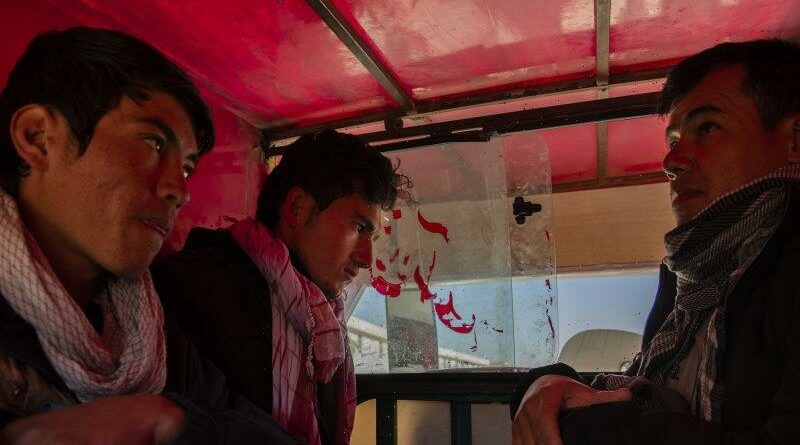 Zaranj, Afghanistan: The smuggler barrelled down the narrow dirt road, bouncing into craters and over rocks that jutted out from the scrubland. His headlights were off and as the car picked up speed, he tightened his grip on the steering wheel trying to wrestle it under his control.

It was just after 1am in this corner of south-west Afghanistan and a full moon drenched the desert dunes with a dim, white glow. Hours earlier, the smuggler struck a deal with an Iranian security guard to send 40 Afghans across the nearby border that night. 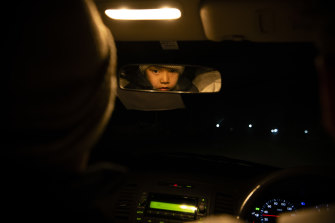 One of two young brothers, ages 4 and 6, who were picked up by smugglers near Zaranj, Afghanistan, near the border with Iran, just before midnight. Credit:Kiana Hayeri/The New York Times

Now a few kilometres down the road, the migrants hid in a ravine waiting for his signal to run.

“I’m coming, I’m near the border, wait a minute!” he screamed into his phone and slammed on the accelerator, kicking up plumes of dust that disappeared into the darkness.

It was a typical night’s work for the smuggler, H, who asked to go by only his first initial because of the illegal nature of his business. A broad-shouldered man with a booming voice, H is one of a handful of kingpins that effectively run Nimruz province, which straddles the border with Iran and Pakistan and is the country’s epicentre for all things illegal.

For decades, the smuggling trade – of people, drugs and money – has dominated the economy here, flushing cash into an otherwise desolate stretch of Afghanistan where endless desert blends into a washed-out sky. Now, as hundreds of thousands of Afghans try to flee the country, fearing persecution from the Taliban or starvation from the country’s economic collapse, business has boomed for people smugglers like H who hold the keys to the gate. 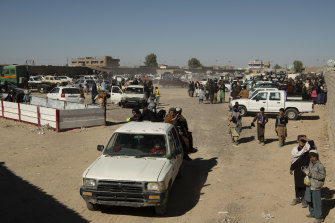 Qadir and Brothers Garage, one of the businesses where migrants come to find trucks to transport them to the Pakistani border, in Zaranj, Afghanistan.Credit:Kiana Hayeri/The New York Times

But as migrants flood into the province, the obstacles that smugglers face have multiplied: Since the former government collapsed, Iran has bolstered its border security while the Taliban have tried to sever the migrant route H. has mastered, one of two migrants use to sneak into Iran.

Journalists with The New York Times spent 24 hours with H to see how the illicit trade that has long run this corner of Afghanistan endures even now.

“Did the refugees arrive? How many are they?” H called out to an auto-rickshaw driver who drove past him earlier that night. He nodded at the driver’s response – three migrants – and sped off to collect two young boys he had agreed to send across the border with his cousin before dawn.

It was a more frantic night than usual, he explained, owing to a last-minute deal with an Iranian border guard who he promised $US35 for each Afghan who crossed the border. That set off a scramble to gather 40 migrants from smuggler-owned hotels in the nearby city, Zaranj, and to bring them to one of H.’s desert safe houses, little more than abandoned-looking mud brick buildings with dirt floors and rusted tin roofs. Now they were converging at a rendezvous point near the border, waiting for the code word – “grapes” – to slip to Iranian security forces on the other side. 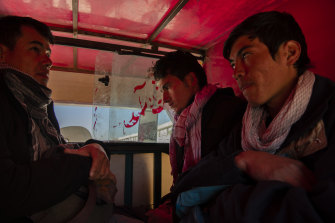 Migrants load up in the back of a rickshaw to be transported to a safe house, where they will wait until the sun sets before being moved closer to the border, in Zaranj, Afghanistan.Credit:Kiana Hayeri/The New York Times

Every step of the operation is at once nerve-racking and familiar, frenzied and meticulously planned, H. explained. Every few minutes, he fielded calls to one of his three phones and shouted instructions to the many accomplices needed to pull off the night’s deal.

After the two boys jumped in his car, H raced back to give the smugglers escorting his group of migrants the all-clear and then met his cousin on the side of a winding path nearby, flashing the headlights as he pulled up.

“I brought some special refugees,” H yelled, referring to the young boys whose parents, both addicts, had recently overdosed. H’s cousin, a suave 26-year-old with one headphone perpetually dangling from his ear, stepped out of his car and into H’s headlights, grinning. 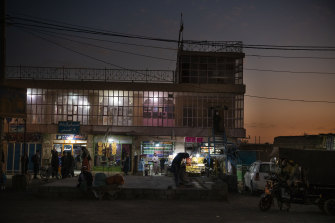 Just on the outskirt of Zaranj, Afghanistan, both sides of the main road are occupied by cheap guesthouses and motels that mostly cater to illegal migrants seeking smugglers to cross them over into Iran/Credit:Kiana Hayeri/The New York Times

A former soldier in the Afghan National Army, the cousin used to smuggle drugs into Iran – raking in much more than his meagre government salary. Once, he bragged, he sneaked 420 kilograms of opium into Iran without getting caught. When the former government collapsed, he went into people smuggling full-time.

Turning around to the young boys in the car, H told them that the man was their uncle and he would take them across the border to be reunited with other relatives living in Iran. The younger boy, Mustafa, 5, wiped the car’s fogged up window with his sleeve to get a better look at the man. His older brother, Mohsin, 9, was less sceptical.

“When I grow up I want to be a smuggler,” he pronounced before hopping out of the car.

We had agreed to meet H for lunch the following day and woke up to the sounds of a bustling city. H had told us about this changing of the guard each dawn, when smugglers slipping across the lunar flatlands return home and the centre of life shifts to Zaranj, where buses unload thousands of Afghans each day.

Along the main drag, newcomers buy kebabs from street vendors and sit around plastic tables, eager to learn more about the gruelling journey ahead. Others peruse shops selling scarves, hats and winter coats – all necessary, the shopkeepers say, to survive the cold desert nights along the migrant trail.

Even in the daylight, an aura of paranoia and mistrust permeates Zaranj – a city of liars and thieves, residents say. Nearly everyone who lives here is somehow connected to the smuggling trade from bigwigs like drug runners and arms dealers to informants paid a few dollars a day by men like H. It is the kind of place where people constantly check their rearview mirrors for tails and speak in hushed tones lest the man next to them is listening.

As we waited for H to wake up, we drove down the dusty road to Pakistan alongside pickups packed with migrants headed for the border, their faces swaddled in scarves and goggles to protect them from clouds of dust. Within an hour, H called and chastised us for driving there. Someone – A driver? The kids playing by the stream? The old man collecting kindling? – must have informed him we were there.

Twenty minutes later, he met us on the road and told us to follow him to his home on the outskirts of town. We arrived at an opulent three-story house and were led down a winding stairwell to the basement: a spacious room adorned with red carpets, gold trimmed pillars and a large television tuned to an Iranian news channel.

“Four of my relatives were kidnapped around the area where you were today,” he warned us as we sat down to eat. Then he lowered his voice: “When we found their bodies, we could only recognise them by their rings.”

H felt safest in the stretch of desert where we drove the night before, land his father owned. He had spent much of his childhood there, taking small boats out along the Helmand River. At 14, he started smuggling small goods – petrol, cash, cigarettes – and accompanying Afghans across the border into Iran.

Back then, it was easy, H explained. Smugglers could pay a small bribe at a border checkpoint and take vans of migrants to Tehran. But around a decade ago, Iran erected a 4.5 metre wall and then, fearing an influx of Afghans after the Taliban seized power, fortified its security forces at the border.

The Taliban, too, have tried to shut down this route, raiding safe houses and patrolling the desert. Still, smugglers are undeterred.

“The Taliban cannot shut down our business. If they tighten security, we will just charge more and get more money,” H said over lunch. “We’re always one step ahead.”

Still, H. admitted, more of his migrants than usual have been deported back to Afghanistan from Iran. Even the two boys he tried to send the night before were ambushed by Iranian soldiers just minutes after they climbed over the border wall.

By 3pm, the boys had arrived back in Zaranj and H’s cousin drove them to the house to eat. On the way, he bought them new winter gloves – an apology of sorts for dashing back onto Afghan soil without them the previous night.

Sitting among the smugglers, the older brother, Mohsin, recounted the crossing, how he was afraid when he heard gunfire and watched an Iranian soldier beat a migrant. The boys had spent the night in a detention facility on the cold, concrete floor. Without a blanket, Mustafa slept curled up in Mohsin’s arms.

“I thought it would be easy to cross the border, but it was too difficult,” Mohsin said matter-of-factly. The smugglers erupted in laughter.

H said he planned to send the boys across the border again that night and told them to rest. Then as dusk settled over the desert, H began his usual rounds: He drove through the borderlands scoping out Taliban checkpoints. He stopped by one of his safe houses where 135 men sat hugging their knees on a dirt floor. Torn plastic from medicine tablets lay strewn around them and the smell of urine hung in the air.

Stepping outside, he nodded at an old man smoking a cigarette who kept guard. Then H turned to us. “This is enough, I think,” he said, suggesting it was time for us to go.

Four days later, H sent a photo of the boys, standing in front of a dust-covered orange tractor. They had made it into Iran that day.