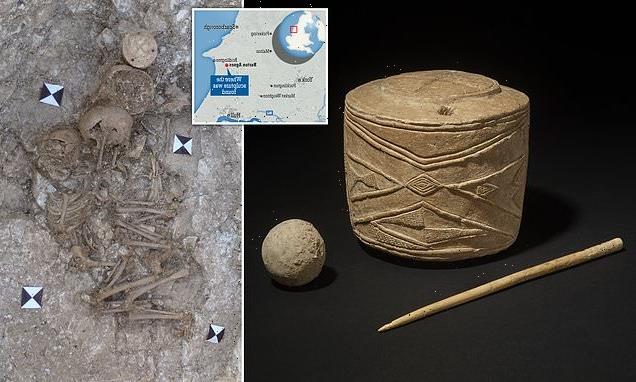 Holding hands and surrounded by ‘talismanic’ drum and ball ‘to protect them’, the touching mystery of three children buried together 5,000 years ago who are part of the ‘most significant prehistoric art find in Britain in 150 years’

The discovery of an ancient burial ground where children were placed with sentimental objects by their parents has been hailed by the British Museum as the ‘most important’ discovery of pre-historic art in Britain in over a century.

The 5000-year-old grave holding three children, buried in an embrace with the eldest child holding the two youngest – whose hands were also touching – was unearthed in 2015 in Burton Agnes, in East Yorkshire.

Archaeologists also discovered a carved stone drum, a chalk ball and a polished bone pin, with the drum in particular being celebrated for its significance.

Seemingly created as a sculpture or talisman rather than a functional musical instrument, the object is one of only four known examples from a time when Stonehenge was only just starting to be built. 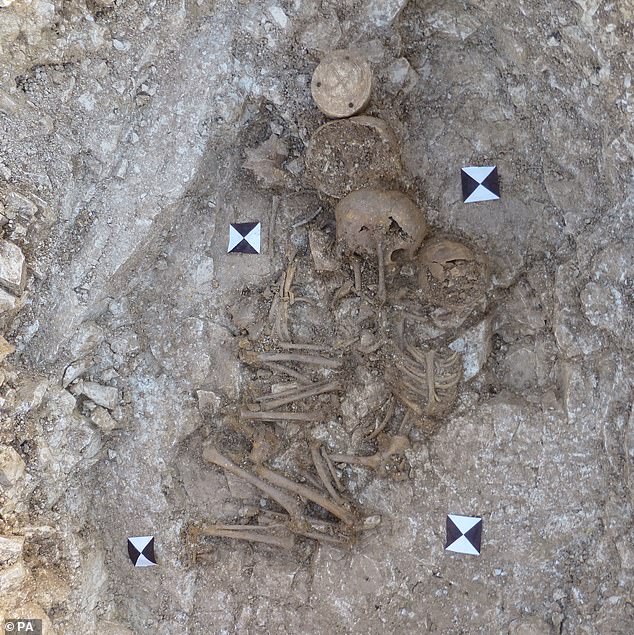 Neil Wilkin, curator of The world of Stonehenge at the British Museum, said it was the ‘most important’ piece of prehistoric art to be found in Britain in the last 100 years.

‘The discovery of the Burton Agnes grave is highly moving,’ he added.

‘The emotions the new drum expresses are powerful and timeless, they transcend the time of Stonehenge and reflect a moment of tragedy and despair that remains undimmed after 5,000 years.’

The curator said that while human sacrifice as a cause of death was possible, it was unlikely due to the personal nature of the burials.

‘There is something protective about these objects. It is almost like they are  protecting the vulnerable young child,’ he said, according to The Times.

‘There is something talismanic about them. Who knows what befell this family or group of families, but it is a poignant scene. Everything about the grave speaks to me of an emotional moment.’ 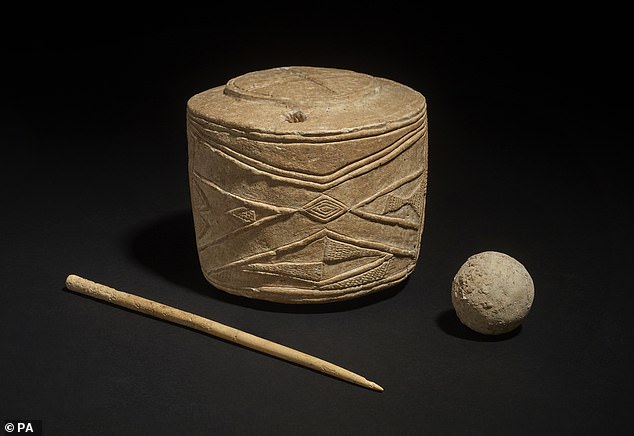 The 5000-year-old grave for three children, buried in an embrace with the eldest child holding the two youngest – whose hands were also touching – was unearthed in 2015 along with a carved stone drum, a chalk ball and a polished bone pin (pictured)

The 5,000-year-old drum carved from chalk is set to go on display from February 17 for the first time in a major exhibition at the British Museum.

Extensive research into the drum confirmed it is one of the most significant ancient objects ever found in the British Isles, the museum said.

‘This is a truly remarkable discovery, and is the most important piece of prehistoric art to be found in Britain in the last 100 years,’ said Wilkin,.

The drum is ‘one of the most elaborately decorated objects of this period found anywhere in Britain and Ireland’, and its style echoes that of objects from Stonehenge and related sites, the museum said.

It was found alongside the grave of the three children who were buried close together, touching or holding hands. The drum was placed just above the head of the eldest child, accompanied by a chalk ball and a polished bone pin.

The drum – which has three holes in possibly to signify the three bodies – was found around 240 miles from Stonehenge near the village of Burton Agnes.

A similar ball and pins have been found in and near Stonehenge. 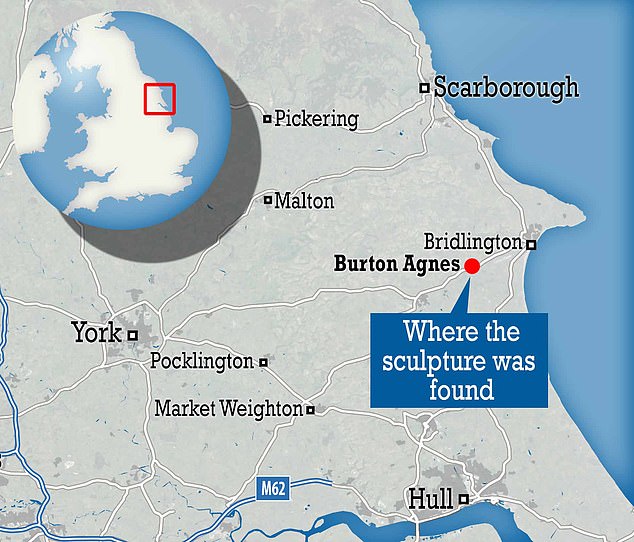 This suggests that communities across Britain and Ireland shared ‘artistic styles, and probably beliefs, over remarkable distances’, the British Museum said.

‘Analysis of its carvings will help to decipher the symbolism and beliefs of the era in which Stonehenge was constructed,’ said Wilkin.

The British Museum’s collection includes a group of three similar drums found in 1889 at the burial site of a single child around 15 miles (24 kilometres) away from the latest find.

The museum describes these three, known as the Folkton Drums, as ‘some of the most famous and enigmatic ancient objects ever unearthed in Britain’.

Radiocarbon dating has revealed they were created at the same time as the first phase of construction of Stonehenge, between 3005 and 2890 BC.