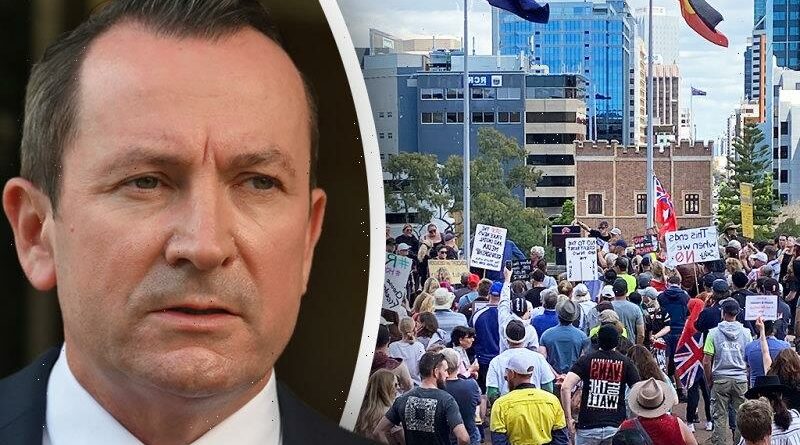 The vaccination rate for double-dosed West Australians aged 16 and over has reached 60 per cent – twice the number seen two months ago, according to Health Minister Roger Cook.

“And in the coming days, we’ll have over 60 per cent of 12 years and over fully vaccinated in Western Australia. So we’re making great progress,” he said on Saturday. 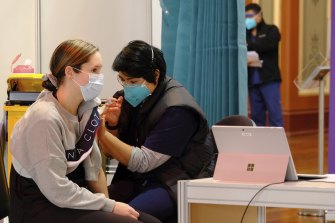 WA government has mandated the vaccine for 75 per cent of the state’s workforce. Credit:Luis Enrique Ascui

He says it puts WA slightly ahead of Queensland and in line with South Australia and the Northern Territory.

But the state government is facing fierce backlash over Premier Mark McGowan’s announcement on Wednesday to expand mandatory vaccination to more than 1 million of the state’s workforce after he was personally targeted with death threats.

Mr McGowan’s personal mobile number was plastered across anti-vaccination and “freedom” social media pages and WhatsApp groups on Wednesday night, with constant threats to himself and his family bombarding his phone to the point where he was forced to turn it off.

WA Police are investigating and Mr McGowan’s security has been beefed up.

An anti-vaccination protest outside his home on Saturday only attracted a dozen people, with police monitoring the situation.

Protesters rallying against the government’s move to mandate vaccines for 75 per cent of WA’s workforce assembled outside the Department of Premier and Cabinet twice this week.

“We have to understand that the only way we can protect Western Australia is by getting high vaccination rates,” he said.

“I just urge people to stop this ridiculous behaviour and simply accept the science.

He said he expected to get to around 80 per cent vaccination for 16s and over by mid-December but they would provide more solid predictions for opening up once they had stronger vaccination numbers by Christmas.

The vaccination mandates are split into three groups, with people working in situations where transmission of the virus is high or could impact vulnerable communities required to have received their first dose by December 1 and second dose by December 31.

The second group are deemed to be jobs critical for the function of businesses and the community and includes childcare and school workers, including all teachers.

This group must have received their first vaccination dose by December 31 and must be fully vaccinated by January 31.

The third mandate applies only if a lockdown, where people working in jobs such as bottle shops, media, pet stores, and members of Parliament, are required to show proof they are fully vaccinated to their employer if they want to attend work.