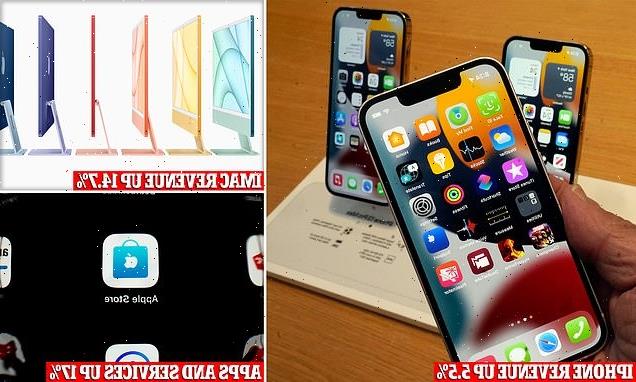 Apple defies gloomy economy to record 19% surge in sales and $25bn profit with firm reporting spike in demand for iPhones, iMacs and apps

Apple reported record fiscal second-quarter sales and profit on Thursday that beat Wall Street estimates as it managed chip shortages and consumers snapped up its new iPhones, iMacs and apps.

Apple’s overall fiscal second-quarter revenue was $97.3 billion, up 8.6 percent from last year and higher than analysts’ average estimate of $93.89 billion, according to Refinitiv data.

The company’s profit hit $25 billion in the latest quarter, easily topping analysts’ expectations of $23.2 billion, and sales also rose 19 percent in the Americas and were up by single-digits in Europe and China.

Apple CEO Tim Cook said the company’s performance was ‘better than anticipated,’ adding that more people have switched from Android phones to iPhones in the latest quarter.

‘We had a record level of upgraders during the quarter and we grew switchers, strong double digits,’ Cook told CNBC.

The positive outlook for Apple comes after a tumultuous week in the tech industry as Meta, Amazon and Alphabet reported less than expected revenue this quarter and the Nasdaq saw its biggest fall since 2020. 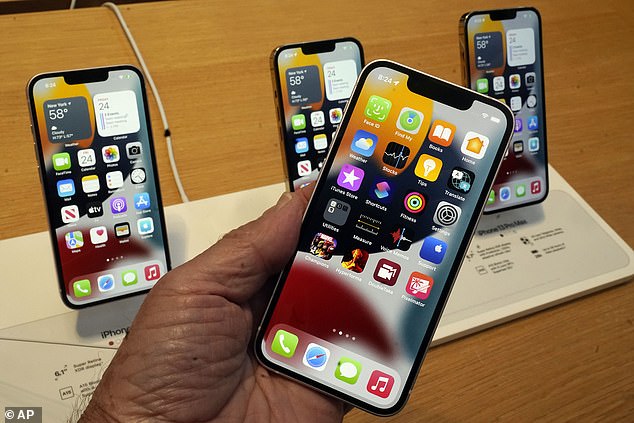 IPhone sales revenue has gone up 5.5 percent in the last year, hitting $50.6 billion in the latest quarter. Apple says it has seen a sharp increase in the amount of users switching to iPhones 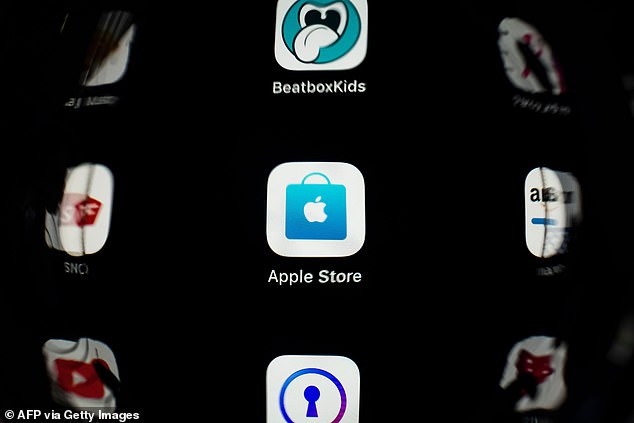 The Apple Store and services saw revenue grow by 17 percent, raking in 19.8 billion for the company, more $100 million more than expected 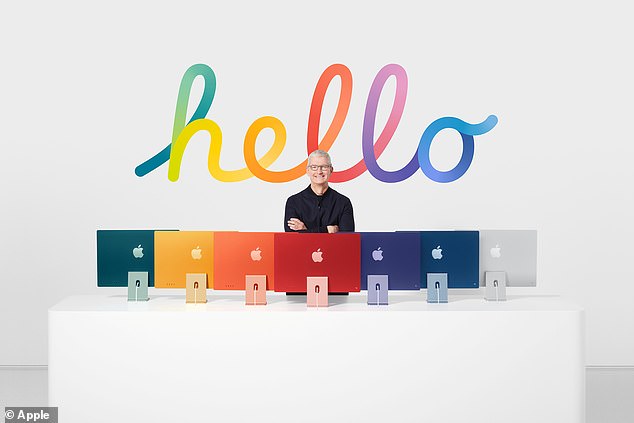 Apple, which is the world’s largest company by market capitalization, is aiming to maintain high demand for the iPhone and other hardware while growing sales from services, including music and video subscriptions.

The latest results show it is making ground on both goals.

Apple Chief Financial Officer Luca Maestri in a release cited ‘continued strong demand for our products,’ and a record high for sales of services.

IPad sales fell 2 percent to $7.65 billion, and were still above analysts’ average estimate of $7.14 billion.

Revenue from iMac computers rose 14.7 percent to $10.4 billion, compared with estimates of $9.25 billion.

Sales of wearables such as Apple Watches, home speakers and accessories rose 12 percent to $8.8 billion, compared with estimates of $9.05 billion.

Apple also announced a 5 percent rise in its dividend to $0.23 per share and board approval to buy back an additional $90 billion in shares. 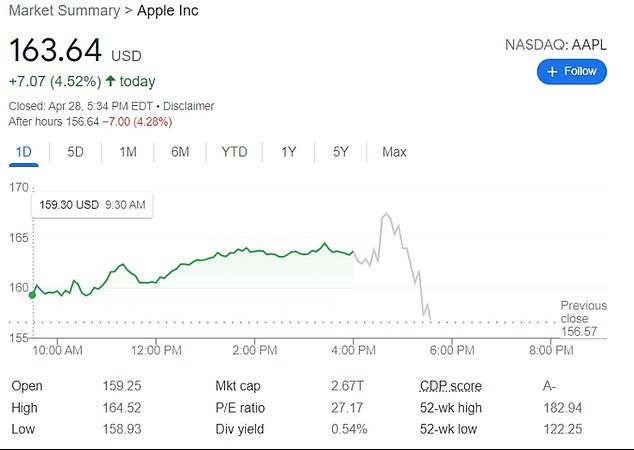 Apple stocks rose by 4.52 percent after the positive revenue outlook on Thursday

Investors have been bracing for drops in consumer spending on tech gadgets and services as the war in Ukraine and other factors drive up the cost of oil, food and other staples.

Some consumers also have put more money into travel and entertainment outside their homes as COVID-19 outbreaks become less deadly, eating into home technology budgets.

But remote work has benefited other businesses.

New lockdowns in China and Taiwan, however, where many parts and iPhones are produced, could bring new obstacles in terms of supply and demand in the current quarter.

The services business is vulnerable to antitrust sanctions in the United States, Netherlands, South Korea, South Africa and many other countries that are weighing whether the company’s fees are too high.

Apple said it now has 825 million paying subscribers across its at least seven subscription offerings, up by 40 million from 785 million last quarter. Its growth comes as rivals such as Netflix Inc report subscriber losses.

Labor unrest could newly affect Apple, too. More than 70 percent of the over 100 eligible workers at an Apple store in Atlanta last week backed a filing for an election to become the company’s first U.S. shop to unionize.

On Thursday Meta CEO Mark Zuckerberg called on the Facebook parent company to scale back its virtual reality Metaverse project after it saw its slowest quarterly revenue growth since its IPO in 2012.

The company’s total revenue, the bulk of which comes from ad sales, rose 7 percent to $27.91 billion in the first quarter, but missed analysts’ estimates of $28.20 billion, according to IBES data from Refinitiv.

Meta CFO David Wehner said in the earnings release that Russia’s invasion of Ukraine had negatively impacted the company’s sales in the latter half of the first quarter, and said the war would continue to weigh on revenue this year.

Recent privacy changes by Apple have made it harder for companies like Meta to track people for advertising purposes, which also puts pressure on the company’s revenue.

Meta had said that the changes from Apple would cost the Facebook parent company $10 billion in 2022.

Alphabet Inc., Google and YouTube’s parent company, reported only $68.01 billion in earnings despite predictions that it would earn $68.11 billion this quarter, up from the $55.31 billion a year ago, according to IBES data from Refinitiv.

The hit to Alphabet represents a 9 percent fall in revenue growth for the company as it authorizes a $70 billion stock buyback to return capital to shareholders. 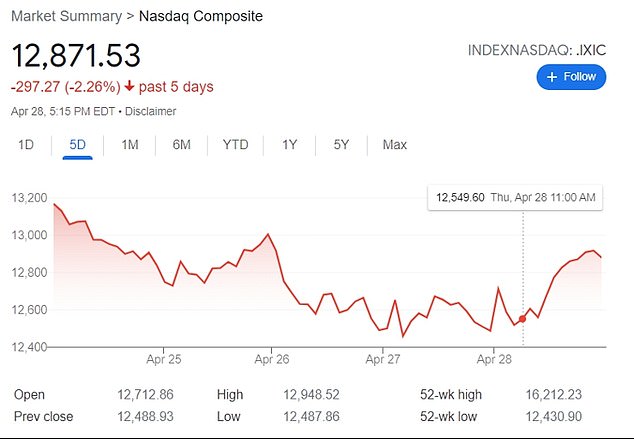 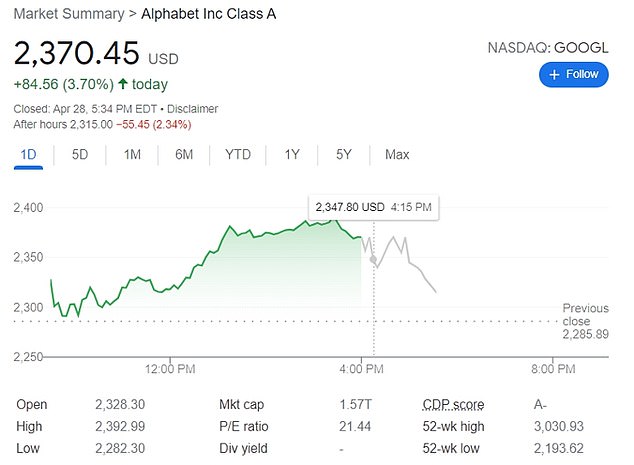 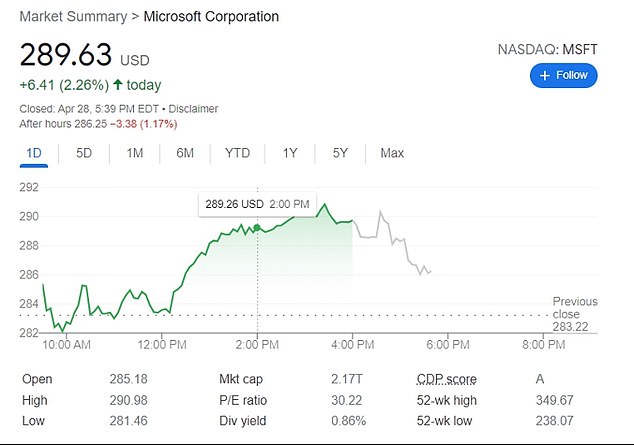 Amazon  also delivered a disappointing quarter and outlook on Thursday as the ecommerce giant was swamped by higher costs and online shopping declined in the wake of the COVID-19 pandemic.

Shares of the company fell 10 percent in extended trading after the company reported its first net loss since 2015, a $3.8 billion hit due in part to its investment in Rivian Automotive.

After a long-running surge in sales during the pandemic and subsequent lockdowns, Amazon’s outlook has dimmed as life returns to normal.

The company’s expenses swelled as it offered higher pay to attract workers during a labor shortage, and even then it could not fully staff warehouses.

While the tech companies fell short this quarter, Microsoft Corp beat Wall Street profit and revenue expectations on Tuesday, reporting revenue of $49.36 billion in the third quarter, compared with $41.7 billion a year earlier.

Analysts on average had expected revenue of only $49.05 billion, according to Refinitiv IBES data.