Arab Knesset members stage a protest against US decision to declare Jerusalem as the capital of Israel. 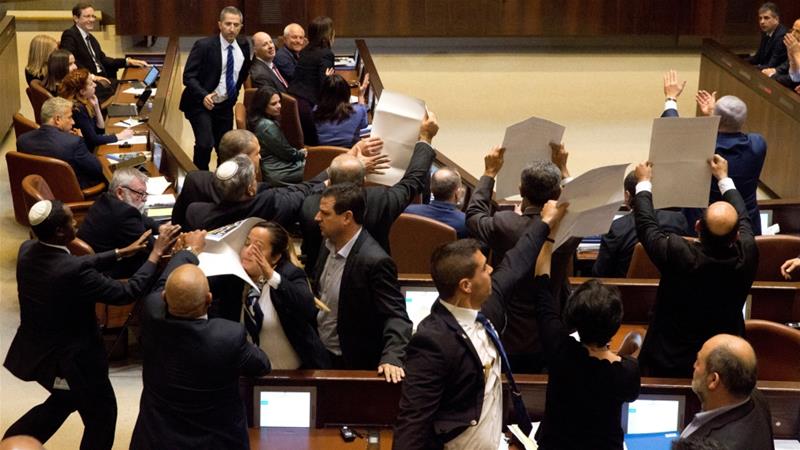 Palestinian members of the Israeli parliament have been forcibly removed from the chamber after staging a protest at the start of US Vice President Mike Pence’s speech.

Pence’s visit in Israel, the last leg of a regional tour, was boycotted by Palestinian leaders following US President Donald Trump’s decision last month to declare Jerusalem as Israel’s capital.

On Monday, he became the first US vice president to speak at the Israeli Knesset, but his speech was initially interrupted by a group of politicians with the Joint Arab List alliance who voiced their anger over Washington’s controversial move.

They shouted “Jerusalem is the capital of Palestine” and held up posters of the al-Aqsa Mosque compound before being thrown out by security.

“We oppose the policies of Mr Trump. He is not only the enemy of Palestinians, he is the enemy of peace,” Jamal Zahalka, a protesting MP, told Al Jazeera.

“We stood up today to protest Pence’s speech. He is an unwanted visitor to the region. We raised the slogan that Jerusalem is the capital of Palestine in response to Trump’s decision to recognise Jerusalem as the capital of Israel.”

Al Jazeera’s Harry Fawcett, reporting from West Jerusalem, said the Palestinian members of the Knesset had warned that they would protest against Pence’s speech.

“They wanted to do something big, something demonstrable in public,” said Fawcett, adding that “they provided a very clear message of defiance and opposition towards the US position on Jerusalem”.

Despite being ejected, Zahalka said he considered the Knesset members’ action a success.

“Israeli security forces knew that we would protest. They attacked us in a savage way but this came in our favour because even though they assaulted us, the international media gave attention to this scene and recognised there is a voice in Jerusalem that says Jerusalem is the capital of Palestine.”

Later in his speech, Pence told Israeli parliamentarians that the US embassy in Israel will be moved from Tel Aviv to Jerusalem by the end of next year.