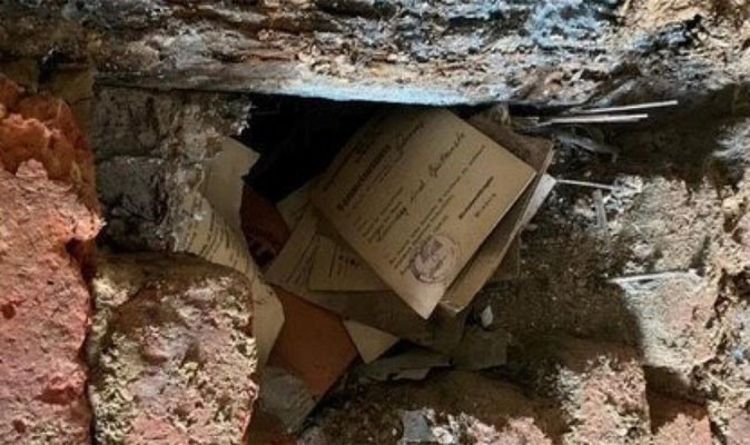 German archaeologists have found a “copious amount of material” that was hidden behind a wall in a residential building. The discovery was made in Hagen, a city located 14 miles south of Dortmund, and contained official documents belonging to the National Socialist Worker’s Party (The Nazi Party), old letters, gas masks and brass knuckles. The city now wants to examine the findings and potentially partially exhibit them.

Experts are still not sure how old the materials are as they have to inspect more than a dozen of large plastic boxes in which the findings are stored.

The earliest find so far dates back to 1928.

Sebastian Yurtseven discovered the rare materials after cleaning his aunt’s house, which was affected by the floods in the middle of July.

Due to the floods, a sheet of plasterboard broke out of a wall on the ground floor revealing a shaft in which the documents were hidden.

The house dates back to the 19th century.

Mr Yurtseven, who is a history teacher, said: “It actually gave me goosebumps at first. I didn’t think it would turn out to be such a huge find.”

After discovering the items, he contacted the city archive in Hagen.

Ralf Blank, head of the Hagen city archive said on Tuesday that the “copious amounts of materials” that were found might have been hectically thrown into the shaft by the members of the National Socialist People’s Welfare organisation (NSV) as American troops advanced onto Hagen in April 1945.

During World War 2, the NSV was responsible for the evacuation of children and looking after the population after air raids. They also documented pregnancies.

Very few source materials exist about the Nazi Party, which is why, according to Mr Blank, it is a “rare find”.

The materials will remain in the city archive for now, with some of the documents being potentially prepared for an exhibition in the city museum.

The deadly floods, which led to the discovery, claimed nearly 200 lives with the official death toll still not being released.

Both Germany and Belgium are still struggling to clear mountains of waste ranging from washing machines, destroyed furniture, building debris, chemicals and raw sewage, in what is proving a nightmare for authorities in both countries.

Patrick Hasenkamp, the vice president of the German Association of Local Public Utilities (VKU) in the city of Munster, told Politico that in some cases debris had been contaminated with faeces and toxic chemicals.

He said: “The main issue is the heterogeneous mixture of waste.

“We can only separate rough aggregates, such as building rubble or electric equipment.”

Mr Hasenkamp added that Germany was faced with the disposal of “unimaginable additional amounts of waste” as a result of the flooding.

He said: “To incinerate all the waste, we would technically need an additional waste incineration plant.

“The disposal may even take a number of years.”

Speaking last week, Hans-Peter Bleken in Bad Neuenahr, a resident of Rhineland-Palatinate, one of the areas of Germany worst hit by the flooding, added: “The next big problem is going to be the huge piles of household rubbish.

“We have beaten Covid but if we now get the bacteria, the rats and more viruses then that will be our problem.”