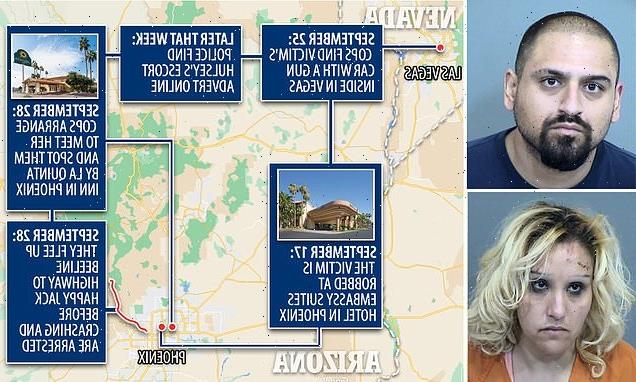 The REAL Tinder swindlers? Phoenix man turns up for online date only to be ROBBED at gunpoint for $3,000 by couple, 32 and 33, before they led cops on violent chase through cities

A couple has been arrested for robbing a man at gunpoint after setting up a fake date on Tinder.

Jose Sandoval Jaquez, 32, and Crystal Hulsey, 33, stole a total of $3,000 from the unnamed victim when they met at the Embassy Suites hotel in Phoenix.

The pair pulled a gray pistol on him and forced him to drive to a nearby Chase ATM to take out $900 before making off with the loot.

They also forced him to hand over his phone, ID cards, social media accounts and bank information, with $3,000 being taken overall.

Jaquez and Hulsey were finally brought to justice following a dramatic police chase after cops spotted her online advert for escort services. 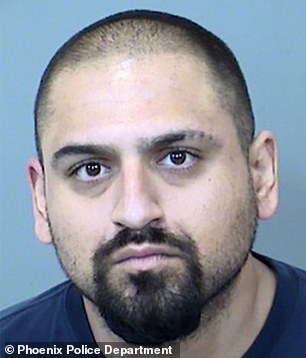 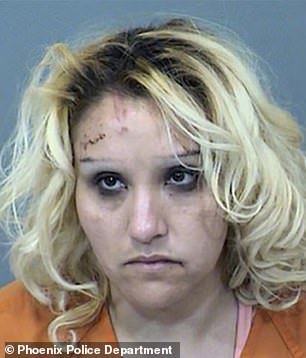 At 10am on September 17 the victim who was expecting to meet ‘Sonya’ was instead met by Jose Sandoval Jaquez (left), 32, and Crystal Hulsey (right), 33 in an Embassy Suites hotel room. In the room Jaquez pointed a gray pistol at him, according to court documents 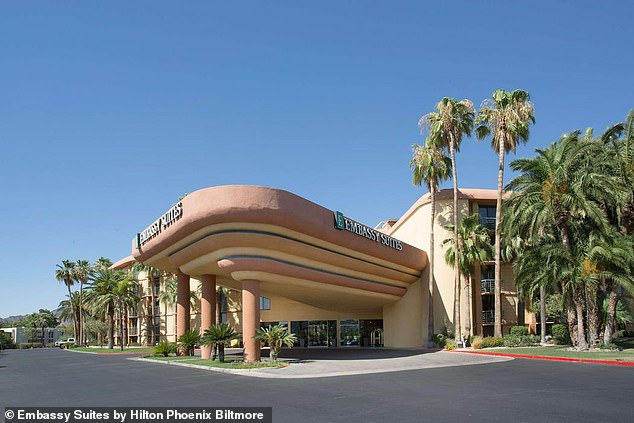 The Embassy Suites hotel in Phoenix in which the victim was expecting to meet his Tinder date Sonya at around 10am on September 17. Instead he was robbed at gunpoint, forfeiting bank account information and his car 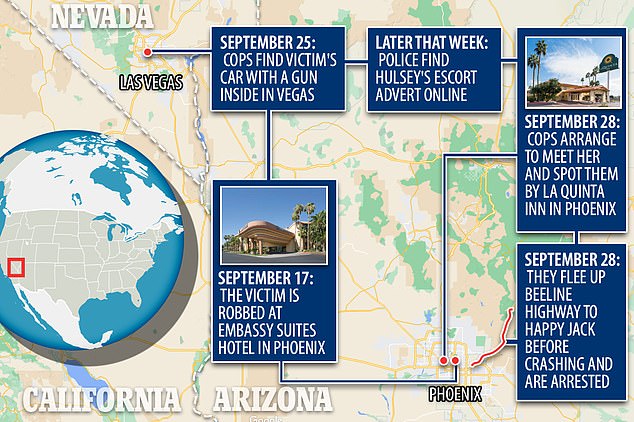 At 10am on September 17 the victim planned to meet ‘Sonya’ but was instead met by Jaquez and Hulsey in an Embassy Suites hotel room.

In the room Jaquez pointed a gray pistol at him, according to court documents.

‘While they drove his car to the bank, the unknown male continued to have the gun out and provide instructions for the victim,’ said the police in a report.

The couple then took the victim’s car to Las Vegas. Seven days later after the initial robbery on September 25 police tried to pull them over but they ditched the car and escaped. In the victim’s abandoned car police found the gray pistol.

After days on the run, Phoenix Police were able to track down the couple because they used their real names for hotel bookings.

They eventually located the suspects by setting up a meeting with Hulsey, who was presenting online as an escort and advertised her phone number.

On September 28 they identified her outside a La Quinta Inn in Phoenix in a Nissan Rogue that Jaquez was driving.

Jaquez sped off leading the police on a chase in which he drove on the wrong side of the road and which spanned multiple cities, said a police report.

During the chase the SUV ran out of gas so Jaquez crashed into and stole another car to continue the escape. 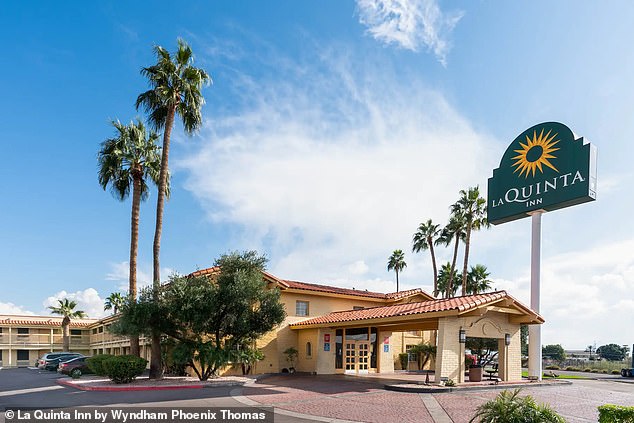 The La Quinta Inn where Phoenix Police agreed to meet the couple after they had spent several days on the run and made a trip to Las Vegas. Jaquez made off in a Nissan Rogue and led police on a chase that ended more than a hundred miles north

The suspects initially fled east of Phoenix towards the East Valley, driving to Tempe, Mesa and Gilbert.

They eventually crashed the stolen car into another vehicle near Happy Jack, Arizona, more than a hundred miles from where the chase started.

Before the pair were able to escape again a Department of Public Safety helicopter landed and troopers arrested them.

In an interview with the police Jaquez admitted that he grabbed a man out of a car and said his girlfriend came with him. A police report said that Jaquez stated that he tried to steal another car but got arrested. He also identified himself in photos at the Embassy Suites.

‘Jose stated he knew this would come back to get him,’ said Phoenix Police.