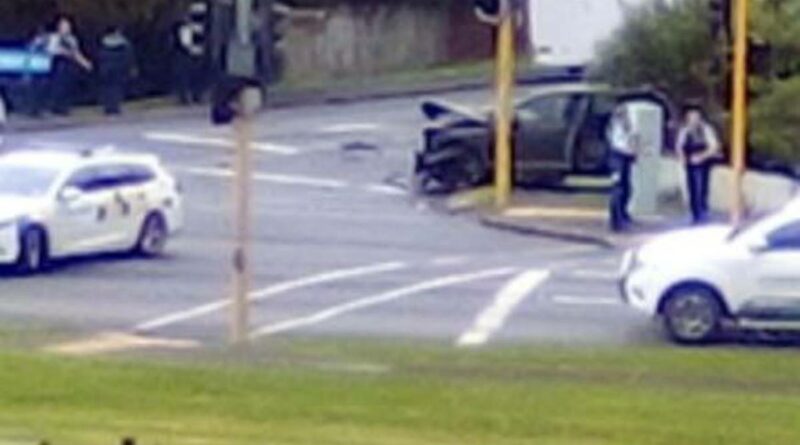 Police confirmed a vehicle had crashed into a second car carrying a mother and two children. The trio suffered minor injuries.

Officers had tried to stop the vehicle at a petrol station but it drove off at “grossly excessive speeds”, later crashing into the car with the mother and kids. The vehicle was being tracked by the police Eagle helicopter.

A number of cordons have been in place and members of the public were asked to avoid the area while police made inquiries.

A motorist told the Herald she was sitting at the traffic light on Settlement Rd near the cemetery just after 11am when the black SUV whizzed past her and ran through the red lights trying to avoid police.

The SUV then crashed into a silver Holden Commodore carrying a mum and her two children with two ear-piercing thuds.

“They smashed into the lady’s car and lost control and it went backwards into the fence. It went ‘bang, bang’,” she said.

“It bounced off the fence and turned backwards.”

The SUV was then wedged into the fence of a nearby property.

The women and her two children had been in their car travelling down Opaheke Rd when the getaway car smashed into the front passenger door, bending the door in.

Prior to the crash, police had already been trying to stop the vehicle and had even laid spikes further down on Settlement Rd.

“They had the cops all over the place.”

After the SUV crashed, the occupants all jumped out and leapt over the fence.

Police then arrested three of the four men who appeared to in their mid-20s.

The motorist said one of the men was trying to avoid getting arrested. “He was saying, ‘its not me, its not me’.

“I was like, whatever, I saw you jump out of that car.”

Another resident was standing at the Papakura Cemetery just before midday when an armed police officer approached him and told him to leave as there was an armed person in the area and it was not safe to be there.

He said a black SUV appeared to have crashed through a fence and he could see police emptying bags out of the vehicle onto the street.

“They were recovering bags and bags of goods. They were opening the bags up on the road.”

Debris from the crashed vehicle was strewn across the street.

“The whole area is shut down and there were police on top of the railway bridge.”

Police were everywhere and some were even hiding in bushes, he said.

Police had set up a command centre on the corner of Settlement Rd.

Armed police went door to door in the area.

Another person told the Herald there was a strong police presence on Settlement and Opaheke Rds just before midday, with “heaps of armed police in the area”.

They could see at least 10 police cars from Settlement Rd.

The Eagle helicopter was hovering over the area.

Cordons were in place at the following intersections: