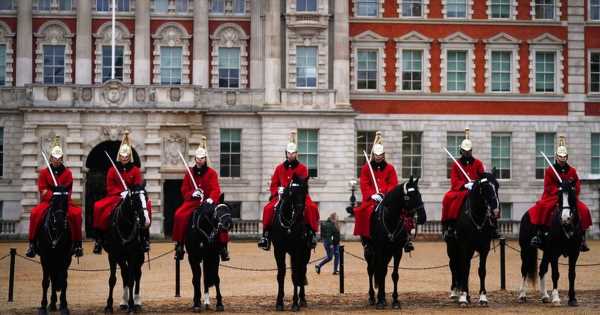 The British Army has defended a member of the Queen's Guard for shouting at a tourist who attempted to touch the reins of his horse.

In a now-viral video posted to TikTok, the soldier can be heard bellowing "Stand back from the Queen's lifeguard, don't touch the [horses] reins" after the woman gets too close.

The video, which was captioned "We Will Never Return To London After This Incident", has sparked fierce debate over whether the soldier was in the right to scream at the tourist.

Many came to the defence of the soldier, with one writing, "Serves her right you aren’t allowed to touch the guard".

Another tweeted: "Why did she expect? there's rules in place for a reason."

Others argued the guardsman was "out of order and over the top" for raising his voice.

"Using horses as a tourist attraction is the real problem here. They’re not really guarding anything though are they, you can walk straight through there. They are ceremonial for tourists that’s why there are armed police there," commented one person.

In response to the incident, an Army spokesperson explained that the soldiers must be permitted to shout loudly "to alert members of the public if they get too close to the horses", as happened in the filmed incident.

“We take all incidents like this seriously and want to ensure all those who visit Horse Guards have an enjoyable time," the spokesperson said, as reported by Birmingham Live.

"This area is particularly busy with tourists and, on occasions, the soldiers undertaking Guard duty need to shout loudly to alert members of the public if they get too close to the horses, which happened in this case.

The spokesperson added: “We have signs placed alongside the horse boxes, stating that the horses bite and would always encourage the public not to get close to horses, as after all, they are animals and can be unpredictable.”