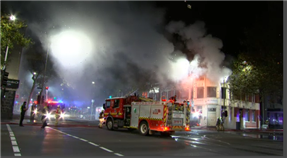 Arson squad detectives will investigate a fast-moving fire that engulfed the former Goldfingers strip club and spread to neighbouring buildings in the early hours of Tuesday morning.

The three-storey-high fire started after midnight at the intersection of Lonsdale and King streets in Melbourne’s CBD, ravaging the site. 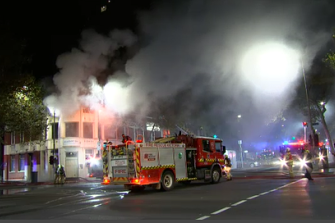 The first fire crews on scene were forced to call for backup as the fire jumped to nearby buildings. 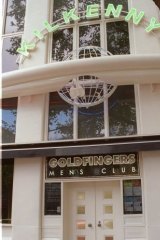 Goldfingers was a strip club before the building was abandoned.Credit:Ken Irwin

“There will be major delays as the intersection will be closed to traffic and pedestrians for some time,” a police spokesman said in a statement.

Several callers rang emergency services at 12.15am on Tuesday, reporting flames coming from the building and windows shattering from the intensity of the fire.

Firefighters arrived at the scene within four minutes of receiving the first call.

The blaze took 50 firefighters nearly 90 minutes to bring under control and firefighters are expected to be on scene for several hours throughout the morning, extinguishing flames and containing water runoff.

A Fire Rescue Victoria spokesman said it was too early to determine the cause, but added in a statement that “there are issues around building integrity and the high fire load”.

Arson squad detectives have been asked to investigate.

The strip club was hit hard by COVID-19 restrictions and closed in 2020.

Anyone with information is urged to contact Crime Stoppers on 1800 333 000 or make a report online at www.crimestoppersvic.com.au.