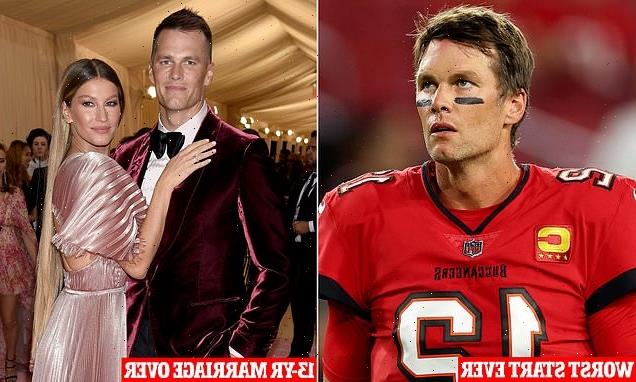 Is this the end for Tom Brady? GOAT’s love of football cost him his marriage to Gisele Bündchen – but now the worst start of his NFL career could spell doom for his playing days

NFL star Tom Brady’s desire to keep playing football appears to have cost him his marriage, but his playing days may soon be numbered after recording the worst start to a season in his career.

Brady and Gisele Bündchen on Friday confirmed their divorce after 13 years of marriage, following reports that she gave him an ultimatum to quit football and spend more time with family.

The loss marked the quarterback’s first three-game losing streak since 2002, which was his first year as a full-time starter for the New England Patriots.

A seven-time Super Bowl champion, Brady has now recorded the worst start after eight games of his 23-year career, with a losing 3-5 record that puts him two games under .500 for the first time ever. 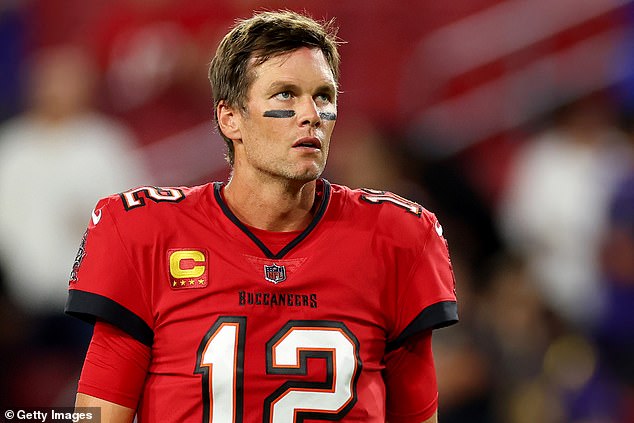 NFL star Tom Brady’s desire to keep playing football appears to have cost him his marriage, but his playing days may soon be numbered in any event 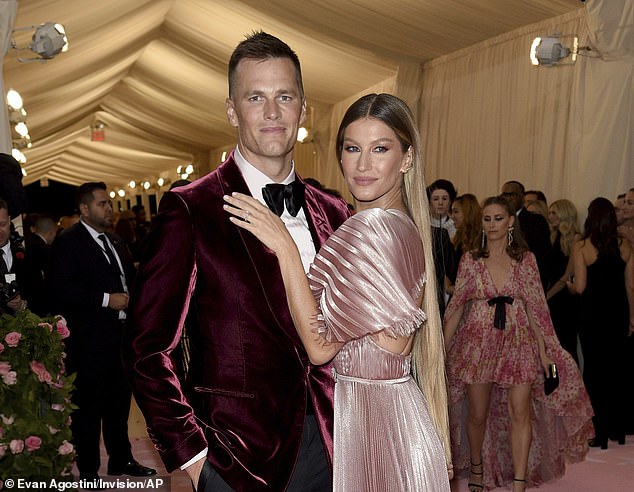 Brady and Gisele Bündchen on Friday confirmed their divorce after 13 years of marriage, following reports that she gave him an ultimatum to quit football

After the Ravens sacked Brady three times on Thursday night, he achieved the ignominious distinction of becoming the most sacked QB in league history with 555 sacks, surpassing the previous record-holder Ben Roethlisberger.

At present, the Buccaneers have a coin-flip chance of making the playoffs, with the New York Times assessing the probability of a post-season berth at 55 percent.

If Tampa Bay loses their November 6 game to the Los Angeles Rams — which would mark the first four-game losing streak of Brady’s career — the Buccaneers playoff chances would slip to just 38 percent.

Brady, 45, is also by far the oldest active player in the NFL, five years ahead of Dallas Cowboys offensive tackle Jason Peters, who is the second oldest at 40.

Under his current deal with the Buccaneers, Brady will hit free agency at the end of the current season, meaning his future in the NFL is very much up in the air.

Still, even if the Buccaneers wind up with a losing season this year, it is hard to imagine that Brady would be unable to find a home if he choses to continue playing.

He is widely considered the greatest quarterback of all time, and many of his records are thought to be unbreakable. 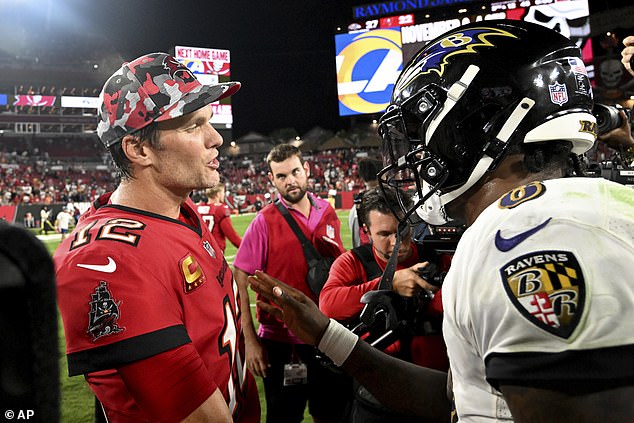 Under his current deal with the Buccaneers, Brady will hit free agency at the end of the current season, meaning his future in the NFL is very much up in the air

In February, Brady announced his retirement from the NFL, but then reversed himself after just 40 days, announcing his return to the game.

Bundchen, who largely put her modeling career on the back burner in order to travel with Brady and live with him and their children in Boston, was widely rumored to have been disappointed by his decision to ‘un-retire’.

Brady has been cryptic about his plans for the future, at times hinting that the 2022 season could be his last, and at others suggesting he could play for up to five more years.

On Friday, Brady and Bundchen confirmed their divorce, announcing on Instagram that they have decided to ‘amicably’ part ways after 13 years of marriage and following weeks of speculation that their romance was over.

In his statement, Brady, 45, said: ‘We will continue to work together as parents to always ensure they receive the love and attention they deserve. We arrived at this decision to end our marriage after much consideration. Doing so is, of course, painful and difficult like it is for many people who go through the same thing every day around the world.

‘We wish only the best for each other as we pursue whatever new chapters in our lives that are yet to be written.’

In a veiled jab at her husband, Gisele said: ‘My priority has always been and will continue to be our children whom I love with all my heart.’ 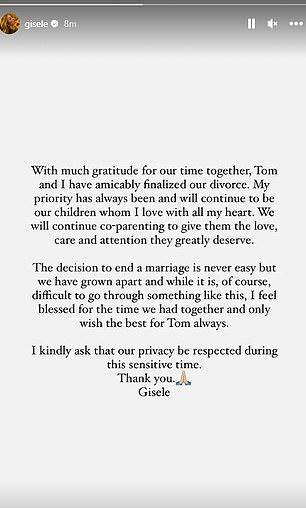 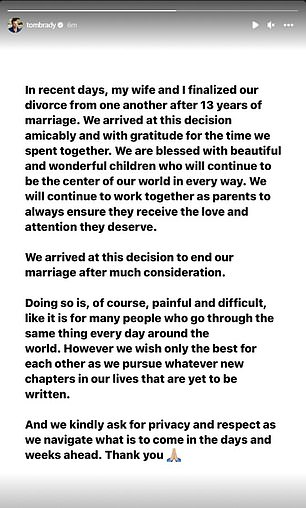 Tom Brady and Gisele Bundchen confirmed their divorce in Instagram statements on Friday. She said her priority had ‘always been’ the children, but said the pair had ‘grown apart’. In his statement, Brady said the decision was ‘painful and difficult’

Tom Brady (right) and Gisele Bundchen (left) have filed their divorce documents on Friday, according to sources familiar with the matter

She said she ‘wishes the best’ for him but confirmed the pair had ‘grown apart’.

For weeks, speculation has mounted that the pair were divorcing as a result of Brady’s decision to go back to work.

The couple, who share two children, have been living separately since reportedly having an huge fight over Brady’s announcement he wasn’t going to retire, with many speculating that’s what prompted their ongoing rift.

Bündchen reportedly gave Brady an ultimatum that threatened to end their marriage.

‘Gisele told Tom either he leaves football to spend time with the family or she is gone for good,’ a source told Us Weekly.

‘She doesn’t want him to continue to get injured and not be able to enjoy life in the future. She is doing it for her family.’

The couple’s marriage seemingly began to unravel after they reportedly got into a fight over his decision to ‘un-retire’ from his  football career.

‘Gisele has always been the one with the kids,’ an insider explained at the time. ‘They had agreed he would retire to focus on the family, then he changed his mind.’

Brady shares children Benjamin, 14, and Vivian, 9, with Bündchen and also has an older son, Jack, 15, with ex Bridget Moynahan.