ASDA have been slammed after a furious shopper spotted a pack of brightly coloured KITCHEN KNIVES housed next to toys on a reduced shelf.

The shocking snap was posted to an anti-knife Facebook group after the gaffe was spotted in Ipswich, Suffolk with the caption: "Asda shame on you". 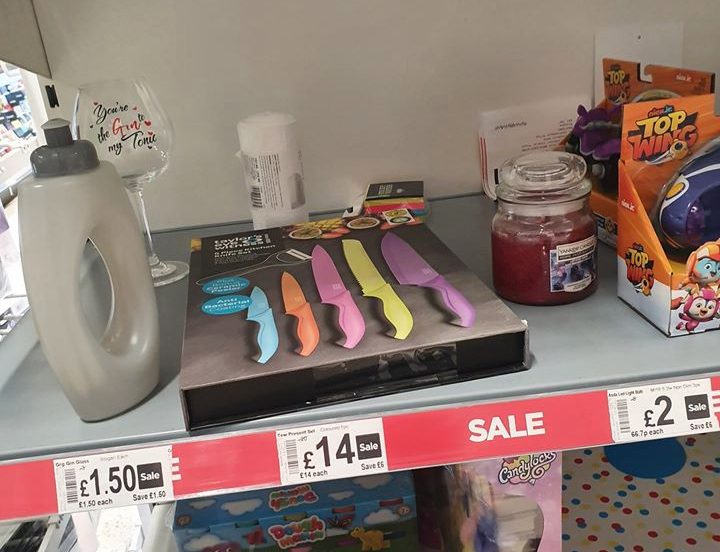 The Facebook user also noted the knives had "no tags" on, adding: "Knives take lives".

In the snap, the set of brightly coloured knives appear to be only protected from prying fingers with sellotape.

They have been left on a shelf with two children's toys, a Dough Mania and Top Wings set.

A spokesperson for the Facebook Group, Ipswich Against Knives, where the snap was originally posted to said: "Authorities, businesses, the public and of course the Government need to be on the same page and unfortunately we don't seem to be.

And local Aaliyah Henderson said: “It is shocking that there still isn't some type of strategy up in place to minimize the amount of knives being sold to randomers all over the country.

ASDA have since removed the knives from the display.

It comes after a 44 per cent in knife crime in Suffolk alone reports the East Anglian Daily Times with a record breaking number of cases in the UK, in excess of 44,000, says the Independent.

A spokesperson for the supermarket chain said: "We take our responsibility as a retailer extremely seriously, which is why in 2019 we made a commitment to stop selling single kitchen knives in our stores.

“Whilst the knife set shown in the picture is properly sealed we have taken immediate action to remove it from the sale section.

“We’re very sorry for any upset caused and would like to reassure our customers that we always want to do the right thing, both for them and their local communities.”