Outraged customers have hit out at an Asda store after it displayed a ‘condescending’ stand selling England football merchandise.

The store in Caernarfon, Wales had a stand selling £1 hats, flags and water bottles branded with the St George’s Cross ahead of next month’s World Cup.

Gwynedd Council cabinet member Craig ab Iago branded the move ‘ignorant’ and called on people to boycott the store before the display was removed. 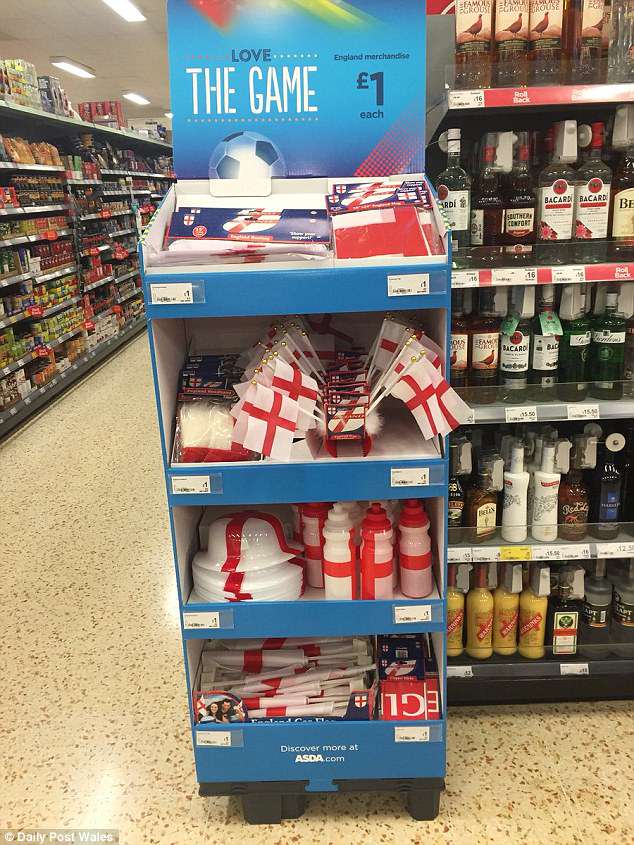 The store in Caernarfon, Wales had a stand selling £1 hats, flags and water bottles branded with the St George’s Cross

The supermarket giant reportedly took the display down ‘following a backlash from shoppers’.

But Asda claimed the goods were removed because they had been sent to the store by mistake.

A number of locals called for the items to be removed from sale and for people to ‘have respect for the country they live in’.

Gwyn Williams said: ‘This is Wales, not England, two different and distinct countries… if English people living here want stuff for the World Cup, it’s a short hop across the border or buy it online. Have some respect for the country you live in.’

John Buckland added: ‘I wasn’t too bothered initially but having seen some of the comments from our English neighbours which range from condescending through to sarcastic and finally downright hateful I really don’t want to see an interlinked replica shirt in my country.’

But others said it was ‘ridiculous’ that anyone was offended by the display.

Sally Peacock said: ‘Sorry, I’m an England supporter and have lived in Wales for 62 years and I believe I have the right to support and buy merchandise of any team.

‘Does that mean people in Wales should only support welsh teams and to forget about Manchester and Liverpool?

‘Ridiculous. I feel very sorry for Asda. I only hope that English stores boycott Welsh merchandise in future. Pathetic.’ Jenneen Brown wrote on Facebook: ‘What’s the problem? Wales aren’t in the World Cup, so I’ll be supporting England.

‘I won’t be buying the merchandise though, but I’m sure there are plenty of English people living in the area or holidaymakers that would.’

Lyn Holmes posted: ‘But Wales is not in the World Cup, they didn’t qualify. How sad are some people. Don’t they think any English families live in Wales? This is pathetic!’

‘As for the councillor who can’t believe there is England merchandise to buy for the World Cup and not Welsh, Wales did not qualify for the 2018 World Cup finals.

‘Think there are slightly more important things going on in the world than this.’

Nicky Evans posted: ‘There are plenty of us English people living in Wales, why not sell English items? Does that mean that all English supermarkets shouldn’t sell Welsh lamb and daffodils?’

Some even said they would boycott the supermarket for removing the England merchandise.

Paul Watts said: ‘I am offended that Asda in Gwynedd has removed the England merchandise out off there (sic) store. I won’t be shopping there any more.’

Thomas Stevens said: ‘Don’t like it? Simple, don’t buy it.’

An Asda spokesperson said: ‘The merchandise was incorrectly sent to the store and has been removed from sale.’