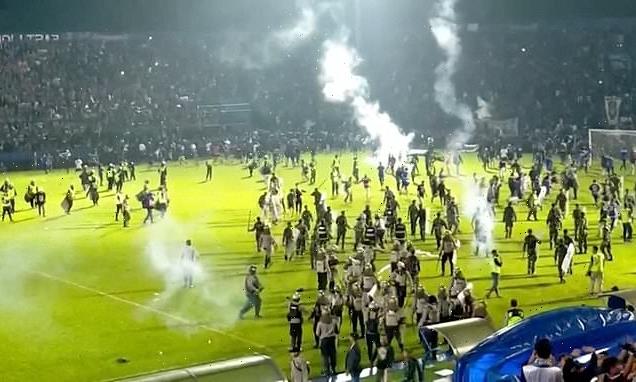 Indonesian football match stampede: At least 174 people trampled to death and 300 injured after police fired tear gas at rioters – as tragedy becomes one of the world’s worst stadium disasters

The death toll from a riot at the end of an Indonesian football match has risen to 174, with the number expected to rise.

The loss resulted in hundreds of Arema supporters, known as ‘Aremania’, invading the pitch throwing bottles and other objects at players and football officials.

Horrific scenes marred the full-time whistle of the BRI Liga 1 match as Arema FC lost at home 3-2 to local rivals Persebaya Surabaya on the main island of Java, a result which saw hundreds of Artema fans invade the pitch.

Fans flooded the Kanjuruhan Stadium pitch in protest and demanded that Arema management explain why, after 23 years of undefeated home games, this match ended in a loss, witnesses said.

Amid the on-field violence, baton-wielding riot police immediately took to the pitch, firing tear gas both on the field and into the stands as the fans retreated.

Harrowing footage shows fans scaling fences as they try to escape the smoke, which did not dissipate, with some falling to the ground and losing consciousness and being trampled under a stampede. 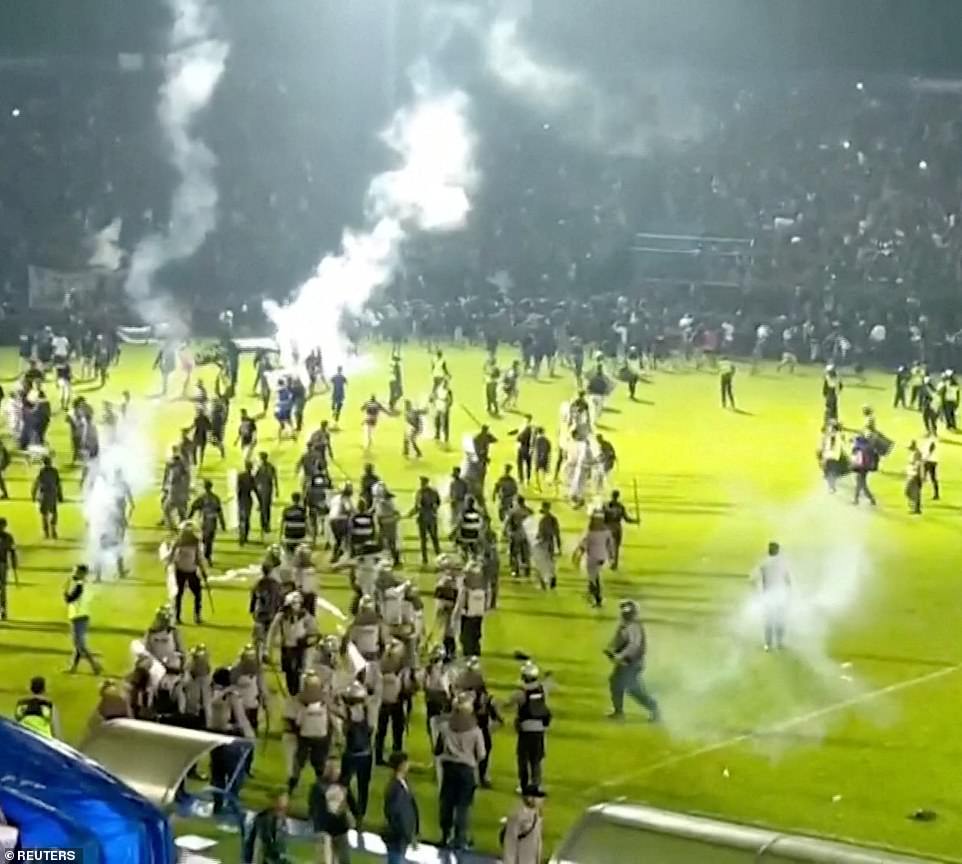 At least 174 people have died following a riot that broke out at an Indonesian football game. Horrific footage shows Artema fans flooding the pitch following the BRI Liga 1 match as Arema FC lost at home 3-2 to local rivals Persebaya Surabaya on the main island of Java 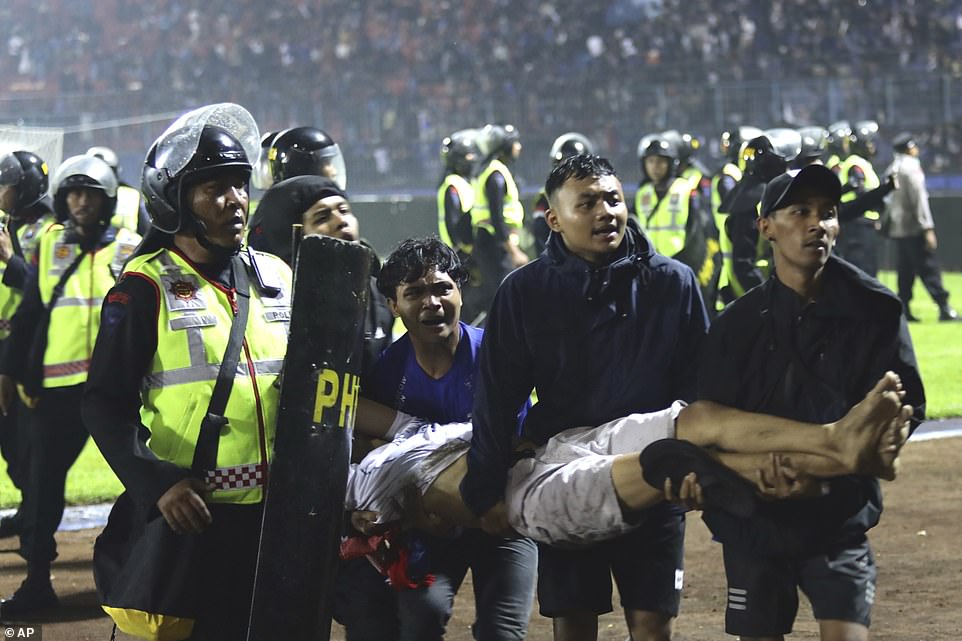 Police and fans carry an injured man out of Kanjuruham Stadium in Malang, East Java. More than 300 people were rushed to hospital but many died on route or during treatment 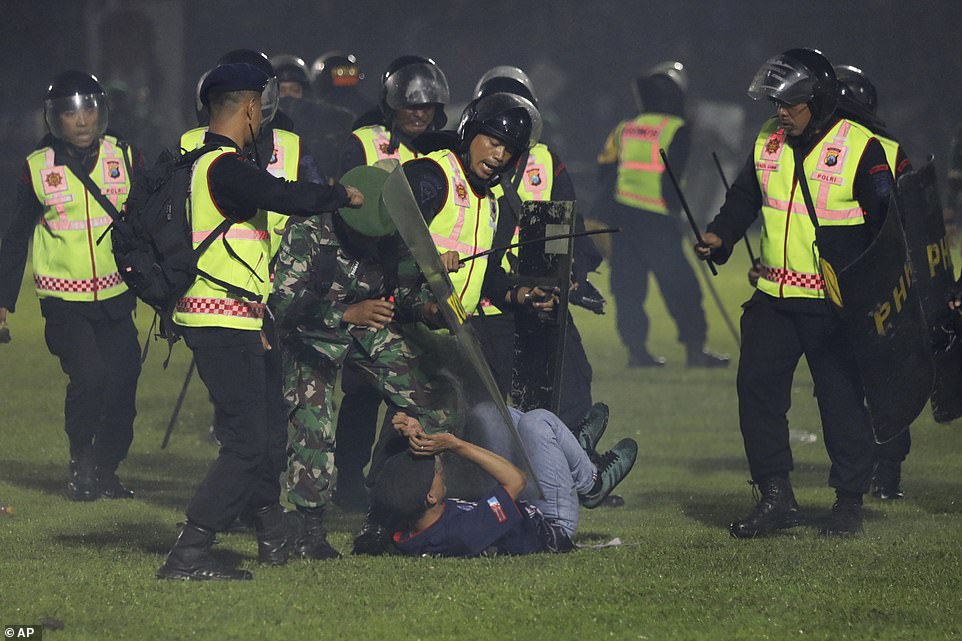 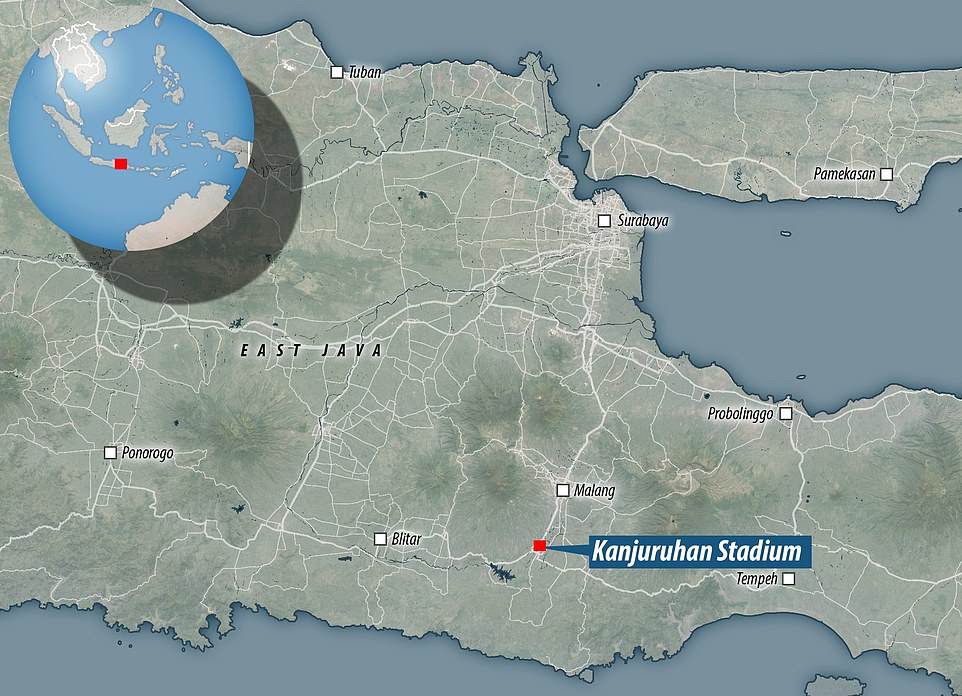 Arema’s stadium is located in the east if Java in the town of Kepanjen, 50 miles from rivals Persebaya Surabaya to the north

The death toll has now increased from 127 to 174, with two police officers and children among the dead. It now means this has been one of the deadliest sporting events in the world.

Most of those who died were trampled to death after police fired tear gas to dispel the riots or suffered from inhalation and shortage of oxygen.

The rioting spread outside the stadium where at least five police vehicles were overturned and set on fire amid the chaos.

More than 300 people were rushed to hospital with their injuries following the riot but many died on their way or during treatment, East Java police chief Nico Afinta has said. 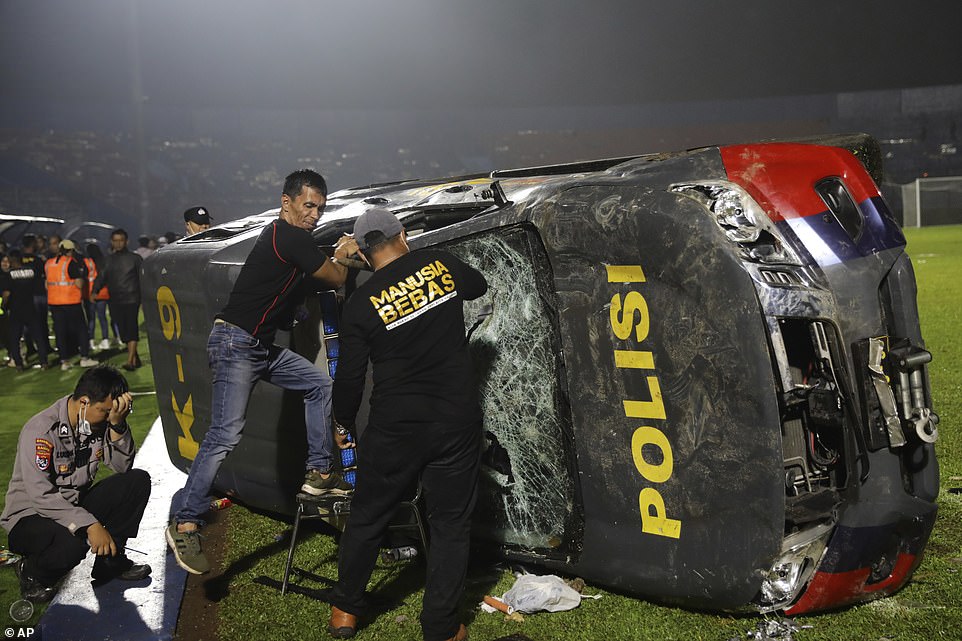 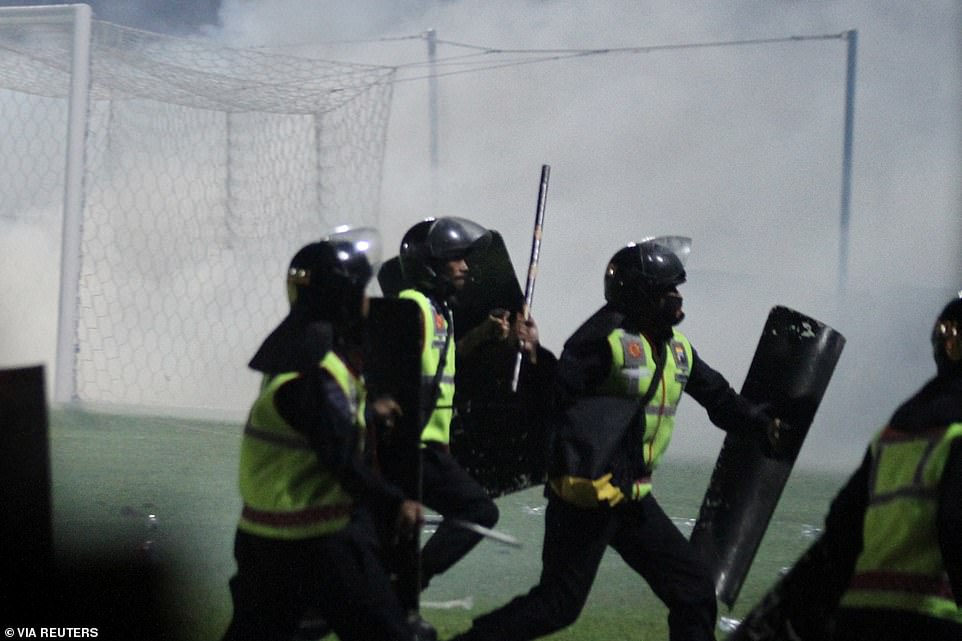 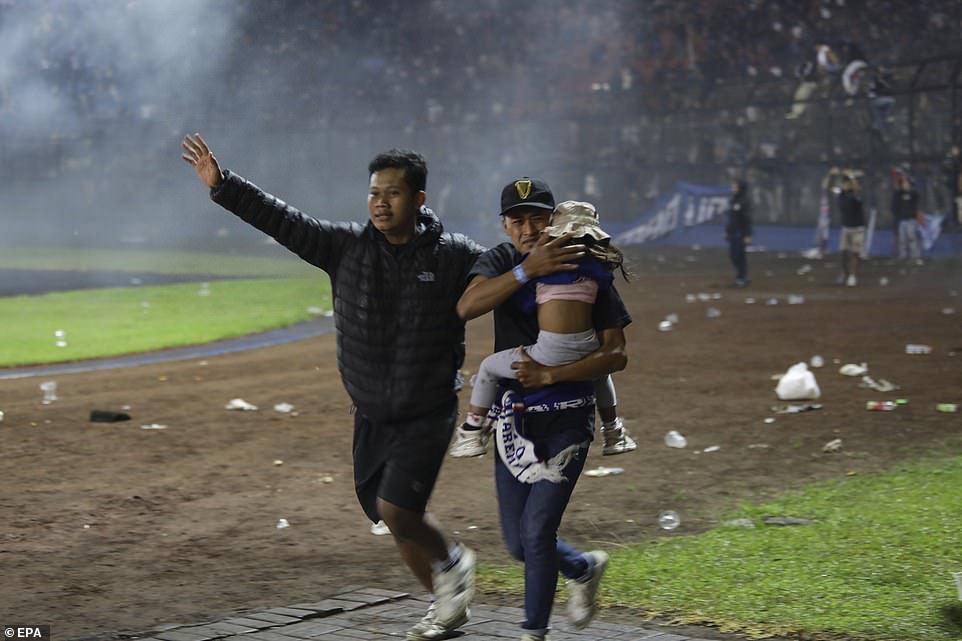 Football fans help a young girl escape from the Kanjuruhan Stadium in Malang, East Java, after riots broke out following the match

He added: ‘We have already done a preventive action before finally firing the tear gas as (fans) began to attack the police, acting anarchically and burning vehicles.’

Mr Afinta said the death toll is likely to increase because many of the approximately 180 injured who are receiving intensive treatment at various hospitals are deteriorating.

Fans flooded the Kanjuruhan Stadium pitch in protest and demanded that Arema management explain why, after 23 years of undefeated home games, this match ended in a loss, witnesses said.

According to the local police chief of Malang, Ferli Hidayat, there were 42,000 spectators at Saturday’s game, all of whom were Aremanias because the organizer had banned Persebaya fans from entering the stadium in an effort to avoid brawls.

Further disturbing footage appears to show rows of bodies turned blue in the hallways of a nearby hospital.

Local reports says that hospitals are struggling to cope with the number of dead and injured being brought in. Further riots broke out outside the stadium as tensions boiled over among supporters, with cars set on fire and bricks hurled at passing vehicles. 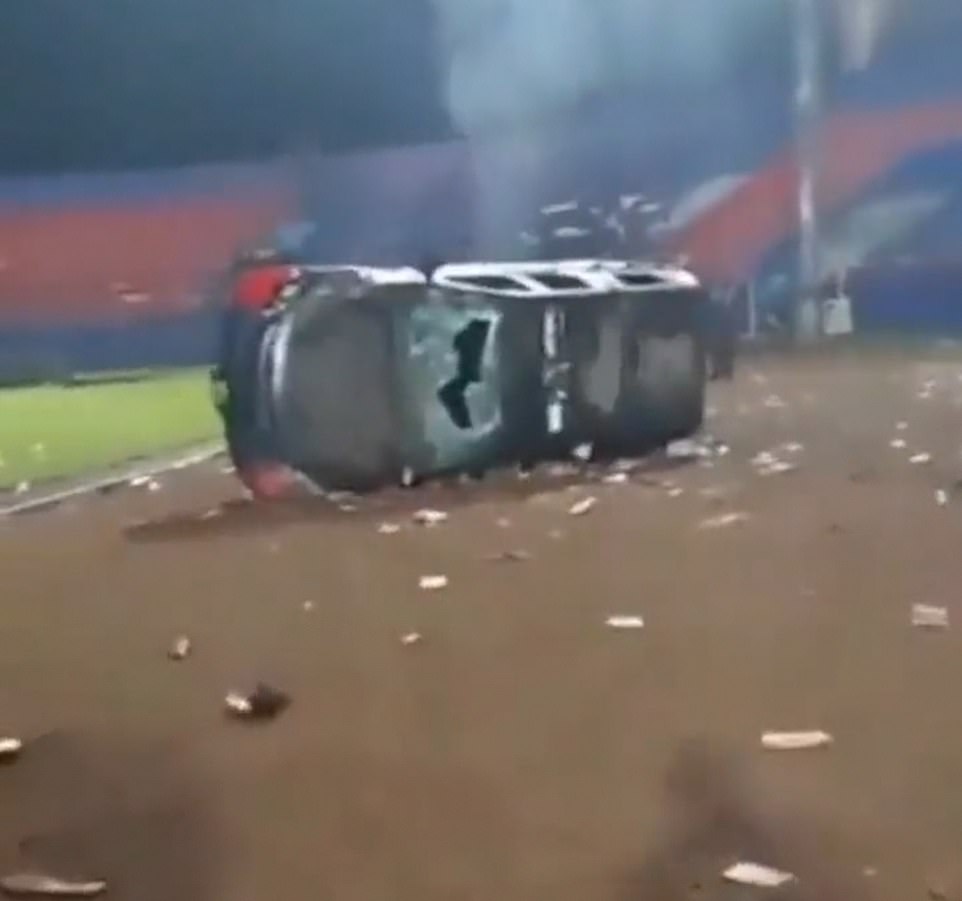 The riots that flared up saw 180 people injured as well as the hundreds killed, and police vehicles were seen smashed up near the pitch 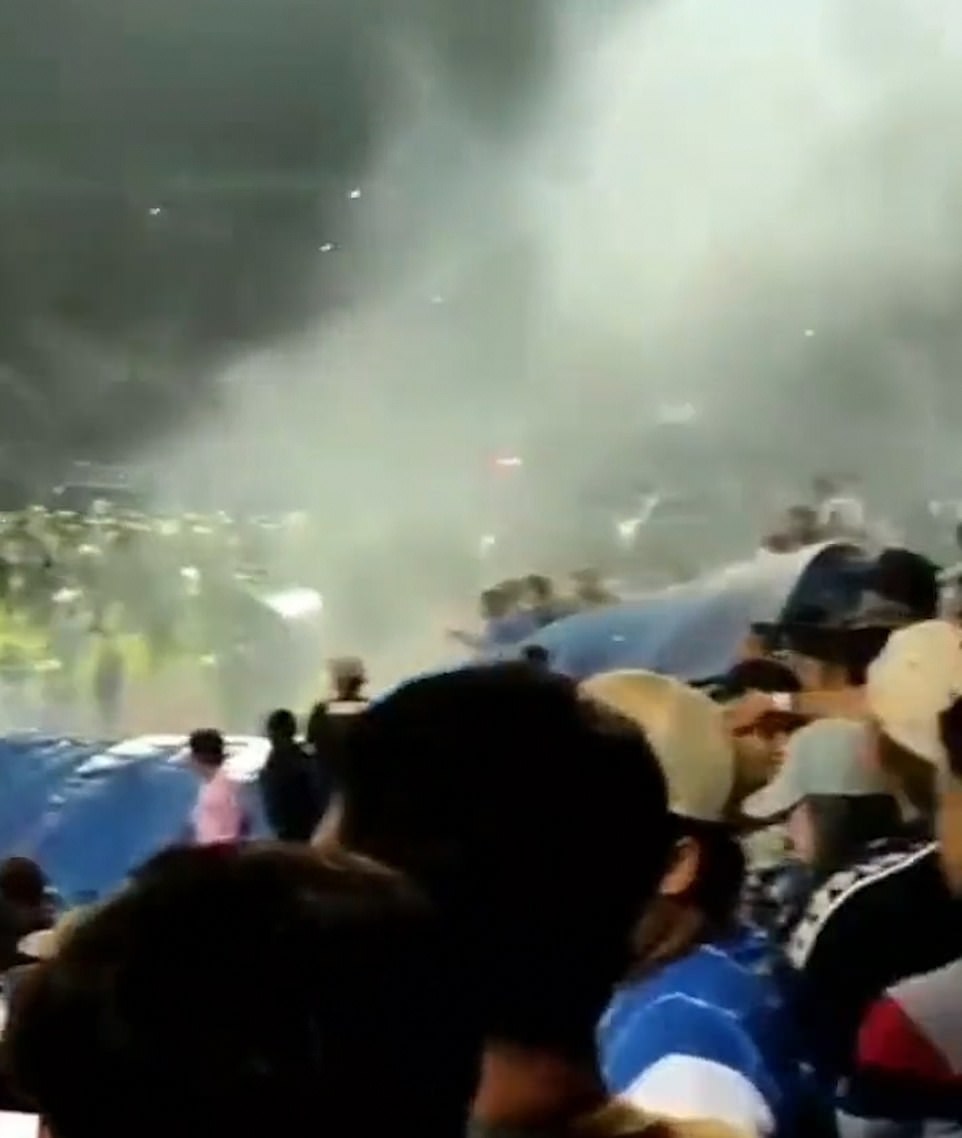 Television reports showed police and rescuers evacuating the injured and carrying the dead to ambulances.

Grieving relatives waited for information about their loved ones at Malang’s Saiful Anwar General Hospital. Others tried to identify the bodies laid out at a morgue.

Last night’s riot is already among the world’s worst crowd disasters, including the 1996 World Cup qualifier between Guatemala and Costa Rica in Guatemala City where more than 80 died and some 100 others were injured.

In April 2001, more than 40 people were crushed to death during a football match at Ellis Park in Johannesburg, South Africa.

Indonesian President Joko Widodo expressed his deep condolences for the dead in televised comments on Sunday. 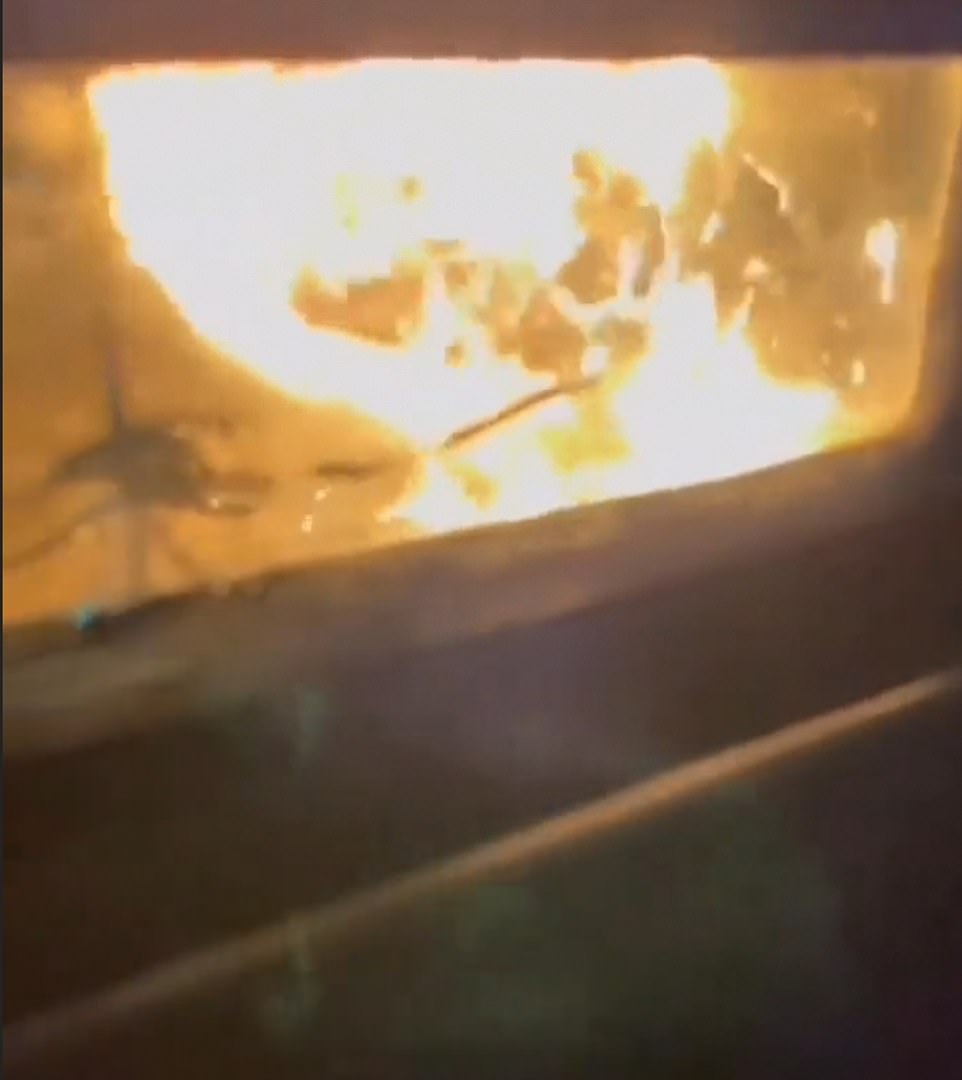 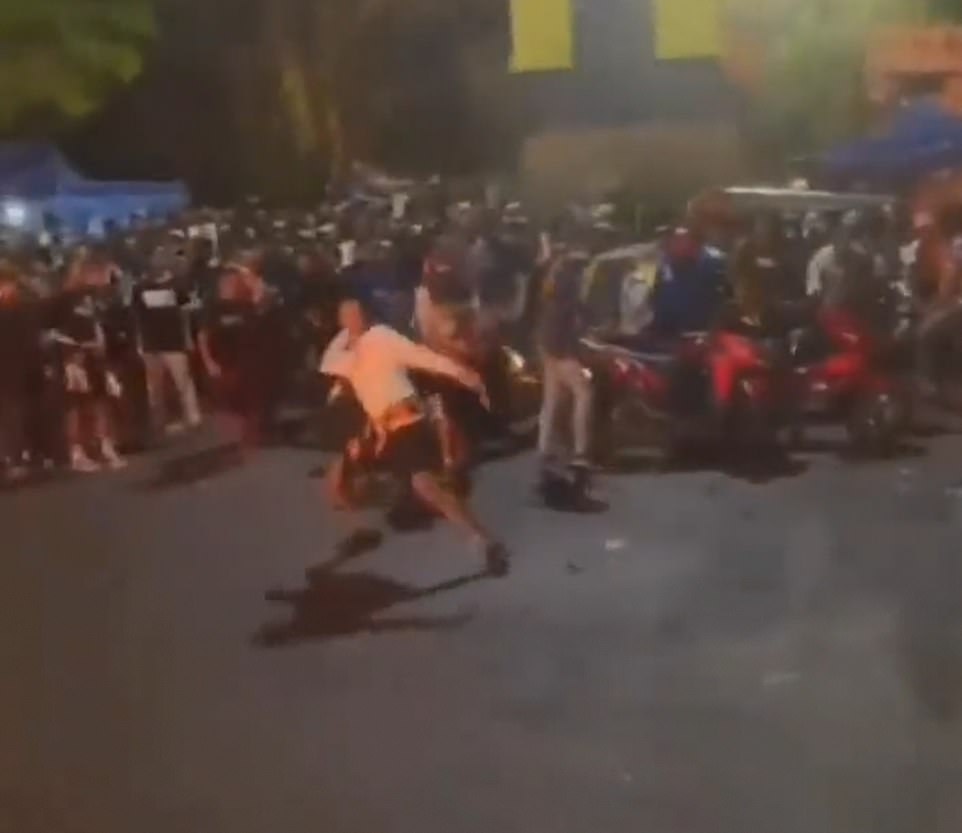 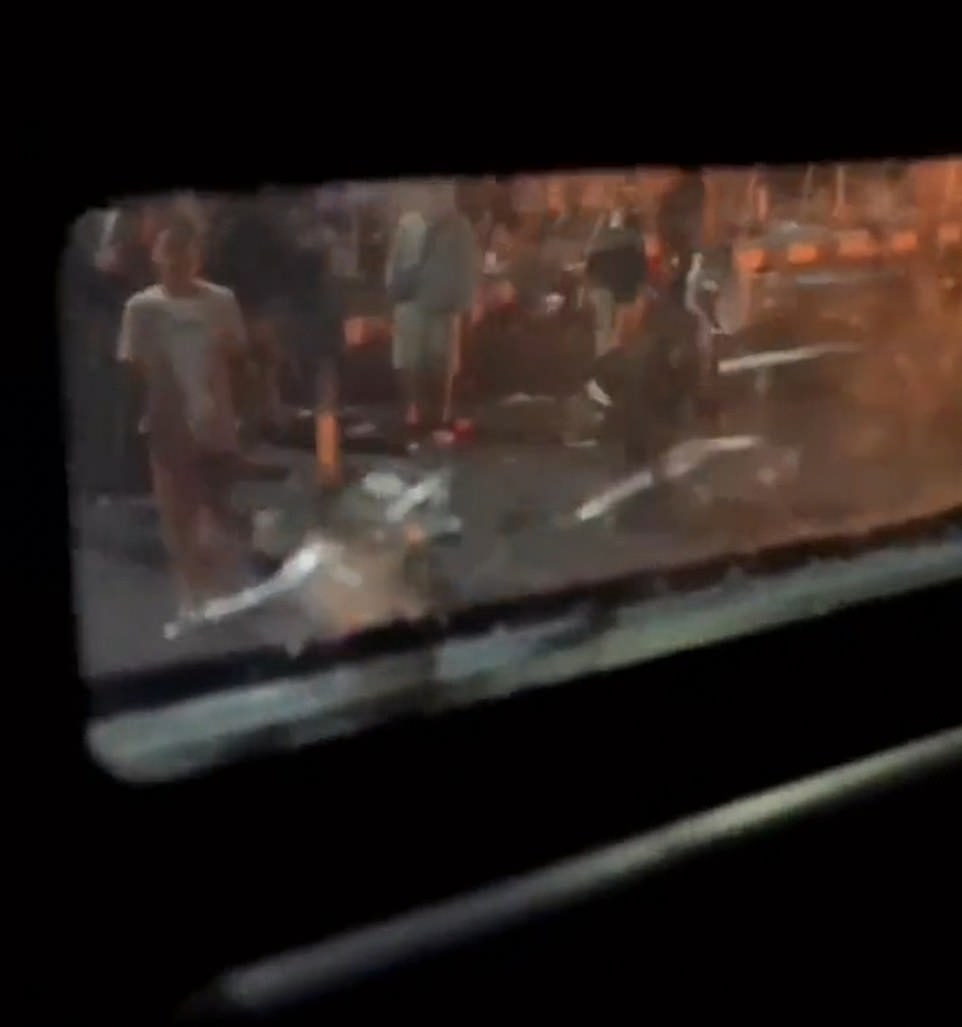 He said: ‘I deeply regret this tragedy and I hope this is the last soccer tragedy in this country.

‘Don’t let another human tragedy like this happen in the future.

‘We must continue to maintain sportsmanship, humanity and a sense of brotherhood of the Indonesian nation.’

The President went on to order the youth and sport minister, the national police chief and the chairman of the PSSI to carry out a thorough assessment of the match and its security procedures.

He also ordered the PSSI to temporarily suspend Liga 1 until it can be evaluated and security procedures improvements.

Football association chief Mochamad Iriawan appeared to accept some responsibility for the chaotic and heartbreaking scenes at the end of the match when he apologised ‘to the families of the victims and all parties’.’

‘For that PSSI [Indonesian Football Association] immediately formed an investigation team and immediately left for Malang,’ he said.

But the heroic comeback was not to be, as Arema conceded a late goal to lose the match, sending their fans into a rage.

The riot led to images of police cars burnt out on the pitch once order had finally be restored within the ground.

Akhmad Hadian Lukita, the president of PT Liga Indonesia Baru (LIB), has said: ‘We are concerned and deeply regret this incident. We share our condolences and hopefully this will be a valuable lesson for all of us.’

Meanwhile, victorious Persebaya’s official Twitter account posted on Saturday evening: ‘Persebaya’s extended family deeply mourns the loss of life after the Arema FC vs Persebaya match. No single life is worth football. We pray for the victims and may the families left behind be given strength.’

The Indonesian football association PSSI has suspected all league matches for one week following the tragedy, while Arema will not be permitted to host any more home matches for the rest of the season.

Youth and Sports Minister Zainudin Amali also expressed his regret that ‘this tragedy happened when we were preparing for soccer game activities, both national and international level’.

Indonesia is due to host the 2023 Fifa U-20 World Cup from May 20 to June 11, with 24 participating teams. As the host, the country automatically qualifies for the cup.

He added: ‘Unfortunately, this incident has certainly injured our soccer image.’

Manchester United this morning paid tribute to those killed yesterday.

The Tweet on the club’s page said: ‘Manchester United is deeply saddened by the tragedy in Malang, Indonesia.

‘We send our sincere condolences to the victims, their families and everyone affected.’