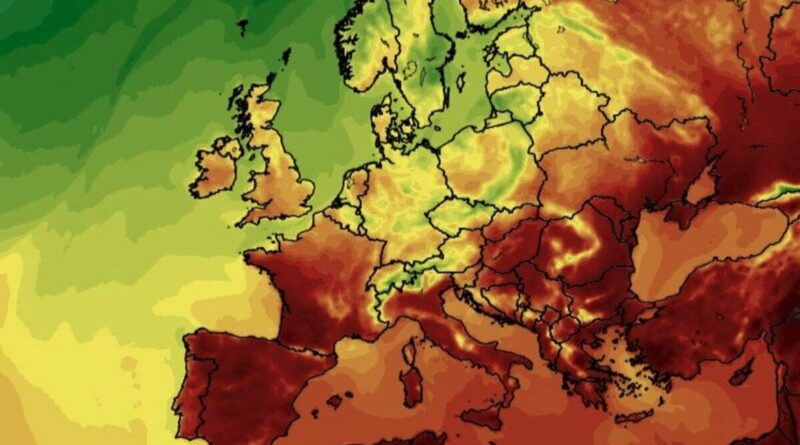 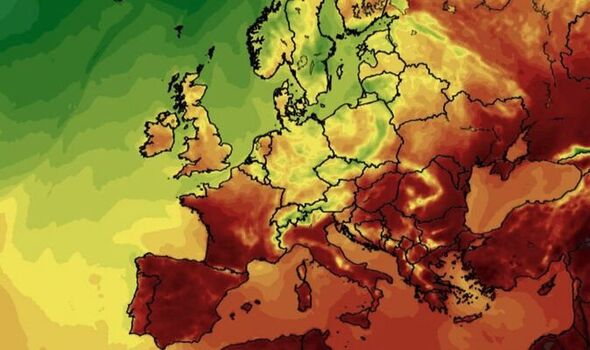 The high-pressure anticyclone which largely drove July’s historic 40C heatwave is about to sweep across the Atlantic and back into the UK. 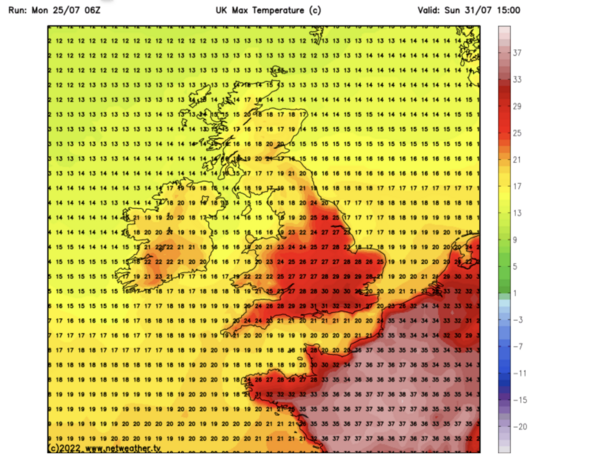 But rather than sending temperatures straight back into the stratosphere, it will initially trigger a sharp cooldown before re-lighting the furnace.

Thermometers will yo-yo through the next seven days, soaring tomorrow before dipping ahead of the next heat surge.

Southern Britain will roast in the highest temperatures while Scotland and the north stay cooler with more of a chance of rain.

Met Office meteorologist Aidan McGivern said: “Temperatures will reach 25C to 27C in the south on Saturday and then turn even warmer on Sunday which will be a hot day.”

“In the north temperatures will be closer to average, and it will be similar on Monday with the potential for the high-20Cs, and there will be outbreaks of showers in places.”

“In the south there will be an upward trend to the high-20Cs during the start of the week.” 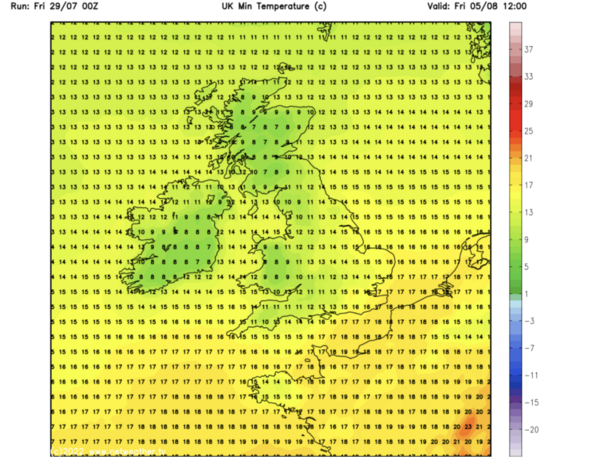 The Azores High will first draw in northerly winds as it stretches from its source cluster of islands off the coast of Portugal, he said.

As it edges into Britain ahead of next weekend, it will turn the furnace back up to maximum sparking warnings of another hot spell.

Mr McGivern said: “During Wednesday, Thursday and Friday next week there is a transition to something a bit more average.”

“The reason for this is that once weather fronts clear through on Tuesday and Wednesday, the Azores High builds in and as it does a cooler north-westerly airflow is more likely.”

“Then later in the week, models tend to agree that the Azores High starts to influence things a bit more and as the high pressure moves in we’re likely to see more sunshine, more settled weather and temperatures start to rise again.”

Northern Britain is the only region likely to see any substantial rain with only showers forecast across the desiccated south.

Rain falling on parched ground will run off in torrents risking floods rather than replenishing water supplies.

Jim Dale, meteorologist for British Weather Services, and author of Weather Or Not? said: “There may be showers around and even perhaps the odd longer period of rain.”

“But we are looking at drought conditions now, and we need sustained rainfall to replenish water supplies.” 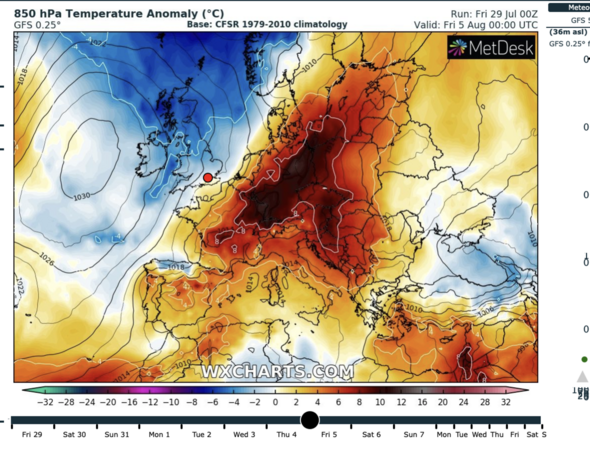 Temperatures across southern Britain will lift into the 30Cs through the start of next week, according to weather models.

Further north the mercury will stall in the mid-teens, only hitting 20C-plus towards eastern coasts.

Thermometers will fall later in the week, dipping into single figures in Scotland and the mid-teens across southern Britain.

Then, later next weekend, temperatures will once again rocket towards the mid-30Cs, according to weather models.

Thunderstorms may bring heavier downpours this weekend although rain will do little to ease water shortages, he warned.

He said: “There could be the odd thunderstorm over the weekend as heavy showers spread eastwards across the country.”

“The rain runoff would be a concern if there were any heavy downpours, especially across the south as the soil is dry and this makes it difficult to absorb water, instead it runs off during torrential downpours bringing the risk of flooding.

“However, the heaviest showers are likely to be further north over the weekend, and here the soil is not as dry.”

A shift in the jet stream may bring an ‘increased chance’ of rain to some parts of the country, according to Met Office meteorologist Marco Petagna.

On Twitter he wrote: “A temporary S [south] shifted #jetstream will bring an increased ‘chance’ of some #rain to central & some southern parts of the UK later this #weekend/early next week.”

“Later next week though higher pressure returns as jet moves back N [north].”