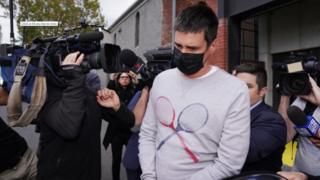 An Australian man filmed and mocked four police officers as they lay dying, a court has heard according to local media.

Richard Pusey, 41, who faces charges of reckless conduct and obstructing justice, applied for bail on Monday.

He was pulled over for speeding on a highway last month. A short while later, a truck veered into the lane and ploughed into the officers.

Mr Pusey was left uninjured. Police say he filmed the scene before fleeing.

On Monday, his lawyer, Vincent Peters, said his client may have been in shock following the accident, reported the Australian Associated Press.

All four police officers had been standing out of their cars when the refrigerated lorry drove into them and Mr Pusey’s Porsche sports car. The driver, Mohinder Singh Bajwa, is facing negligent driving charges over the crash.

Mr Pusey was arrested at his home in Melbourne hours after the crash on 22 April on the Eastern Freeway. Senior Constables Lynette Taylor and Kevin King, and Constables Glen Humphris and Josh Prestney died at the scene.

It represented the worst loss of life in the history of Victoria Police, officials said.

Police told a court on Monday that Mr Pusey filmed the scene for over three minutes, during which he zoomed in on certain areas and made derogatory remarks.

The body camera of Senior Constable Taylor also captured Mr Pusey taunting her as she lay pinned under the truck. Experts say she was likely still alive at the time.

Police have alleged that he later tested positive for drugs.

“There you go. Amazing, absolutely amazing,” he is alleged to have said.

“All I wanted was to go home and have my sushi now and you’ve [expletive] my [expletive] car.”

His reported statements have sparked outrage in the local community.

The court is yet to make a decision on his bail application.