A group of young Australian and New Zealand travellers have lost all their belongings after a bus taking them to the Anzac Cove Dawn Service at Gallipoli burst into flames.

The 43 passengers were four hours into the journey in Turkey when smoke started belching from the engine and they were told to get off. 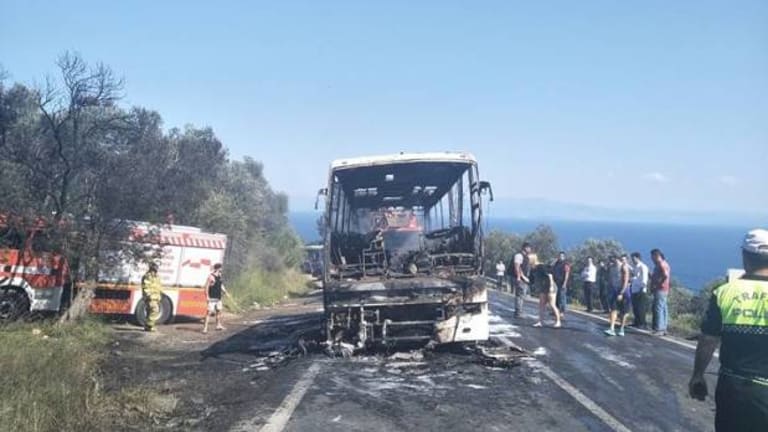 A bus full of Australian and New Zealand travellers burst into flames in Turkey.

The 42 Australian and New Zealand passengers, along with one person from Italy, a driver and a tour guide, all escaped unhurt, but many lost their luggage, their passports and mobile phones.

New Zealander Laura Smith posted dramatic photographs of the fire on Facebook, and said she was shaken by the close call.

“We may have lost all our belongings but by some miracle everyone made it out ok,” she wrote.

Another New Zealand traveller told Seven News she was on the bus ahead of the one that caught fire, and their guide turned the bus around to go back to help.

“We headed back to provide whatever help we could, and then as we were coming around the corner we just saw thick, huge plumes of smoke coming around from the other side of the mountain," she said.

"Our tour guide grabbed a fire extinguisher and we just grabbed whatever bottles of water we could and ran towards the scene.

"As we got closer they were all sort of sheltering from the sun in the shade, and the bus was completely alight with flames spewing out of the sides and just so much smoke."

She said a number of travellers from the burning bus looked shaken.

"Everyone was sort of panicking, they’d lost their passports, laptops, phones."

Organisers transferred the group to a hotel nearby where they received clothes and blankets before boarding another bus to get to the service on time.

Peters said the tour group was about to catch a boat over to Gallipoli and would then be sleeping outside for the rest of the night. In the morning the New Zealanders would be walking to Chunuk Bair and the Australians to Lone Pine.

Fairfax Media has contacted the tour company and the Department of Foreign Affairs and Trade for comment.