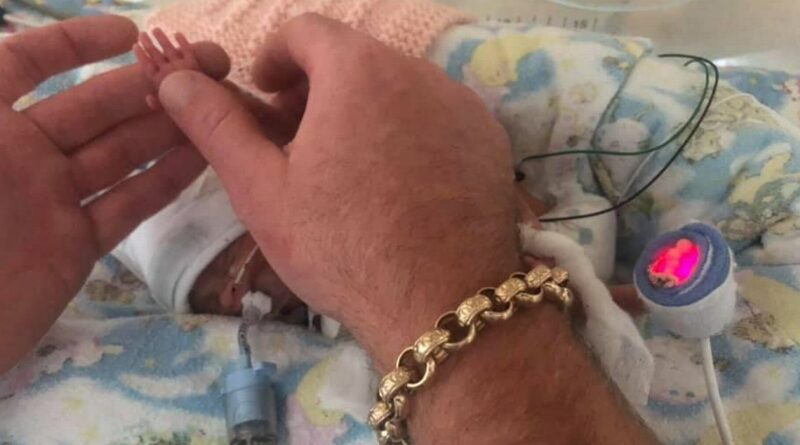 A baby born at just 23 weeks was so tiny, her hand was the same size as her dad’s fingernail.

Doctors told parents Katie and Rob Hampson the tot had a one-in-four chance of survival.

Katie, 27, a full-time mum, said: “Her body was the size of Rob’s hand and her little hand was no bigger than his fingernail.

“She was so tiny, but perfectly formed with her little eyelashes, fingernails and toenails. She was tiny – like a little doll.”

The pregnancy had been fraught with worry after Katie suffered a heavy bleeding from the eighth week.

The mum of two said: “It was horrific because I just didn’t know if I was going to lose Elsie or not.

“I was living with the unknown, so I just couldn’t relax or enjoy my pregnancy and even in hospital there was no guarantee she would be alive.”

After a natural birth last June, Elsie was kept in the NICU on a ventilator for nearly 70 days. Katie took the photo of her “high-fiving” her builder dad, 32.

She said: “I’d to wait nearly five hours to see Elsie in the incubator. “When I eventually did, I was in shock. I didn’t get to hold her.

“I was so nervous and didn’t know whether she would survive. Her skin was practically see-through, and she was so small.”

But nearly five months after she was born, Elsie finally gained enough strength to return home for the first time. She now weighs a healthier 13lb 6oz.

Katie, from Rochdale, Lancs, said: “She’s a little miracle, she’s overcome so much.

“Not even the doctors or nurses had hopes that she would survive but she’s a little fighter. We’re so proud.”

She said of Royal Oldham Hospital: “The staff are real-life angels.

“They should be recognised for the amazing job they do. They saved my baby’s life.”