A family of ducklings have been pictured struggling to swim through a pond covered in rubbish.

The tiny birds were spotted battling past discarded bottles, toilet roll tubes and other bits of waste at Tower Gardens in Skegness on Saturday June 23.

A mother who was passing by said she was left ‘heartbroken’ to see the animals in distress and the pond in such a ‘disgusting’ state. 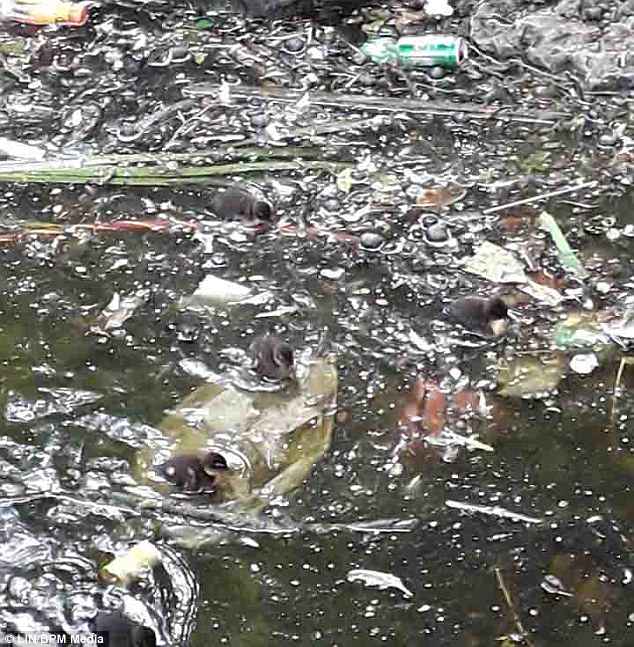 The tiny birds (pictured) were spotted battling past discarded bottles, toilet roll tubes, beer cans and other bits of waste at Tower Gardens in Skegness on Saturday June 23

Tower Gardens at Grand Parade is a popular spot for families to visit in the town, nestled near arcades and opposite The Embassy Theatre.

The mother, who wanted to remain anonymous, said: ‘It left me heartbroken when during my walk with my children we noticed that five little ducklings were swimming with their mother in The Tower Gardens pond.

‘The pond is so littered that the poor ducklings found it hard to swim through.’ 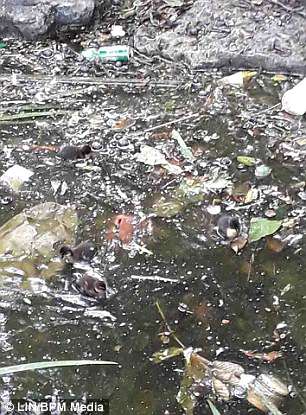 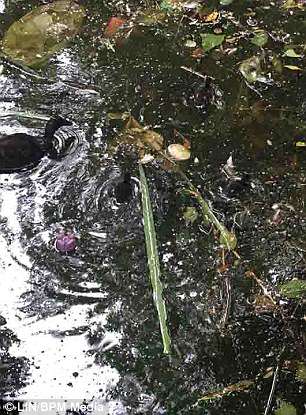 Another added: ‘That’s an absolute disgrace! Unfortunately, this is just the tip of the iceberg in today’s world.’

‘This is disgusting. I haven’t been in tower gardens for some time and am appalled to see it looks like this now. Why do people do this,’ said another poster on Facebook.

While one person summed up the feelings of the community by simply saying, ‘disgusting’.

Councillor Carl Macey of Lincolnshire County Council has raised his concerns about the state of the pond with East Lindsey District Council.

The authority says it will arrange for the litter to be removed – but Councillor Macey says there is only so much they can do, and called on the public to take responsibility.

He told Lincolnshire Live: ‘A lot of it we can only blame on people who do not pick up their rubbish.

‘Obviously this stuff poses a risk to the wildlife in the pond. It happened last year too but the council try to do the best they can, but there’s only so much they can do.’

‘If people do not take responsibility the pond will look like this. The message is – pick up after yourselves.’