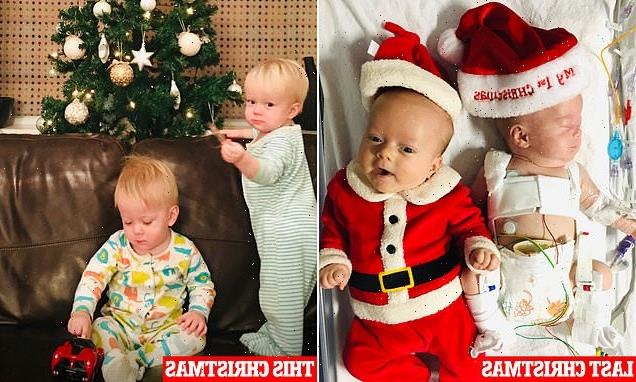 Twinvincible! Side by side at home for Christmas… 15-months-old Joshua and the brother who helped him through life-saving battle

As tiny Joshua Jefferson lay battling for life in hospital, there was one miracle no one could have foreseen.

For when his identical twin Edward was placed into his cot, the boy started to get stronger and stronger.

With his brother by his side, Joshua battled through two operations and was finally able to leave hospital.

And this year the twins marked their first Christmas together at home with relieved parents Martin and Adele. 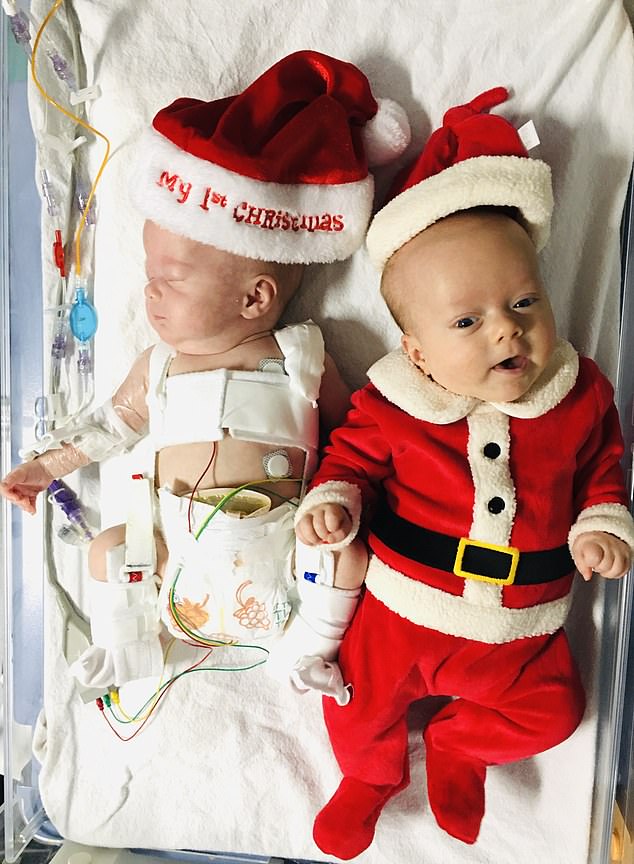 Mr Jefferson, 42, a police crime scene investigator, said: ‘It definitely helped Joshua having his brother there in his cot, it really settled him. There is such a strong bond between them.’

But four days later Joshua stopped feeding, and he was rushed back into A&E.

On arrival, Joshua stopped breathing, leaving his parents fearing the worst. Mr Jefferson recalled: ‘He was resuscitated three times, and the doctors said that he may not make it.’

Joshua was transferred to Sheffield where it was discovered that he had an infection in his intestines called necrotising enterocolitis, a flesh-eating bug.

‘We didn’t know what was going to happen,’ Mr Jefferson said. 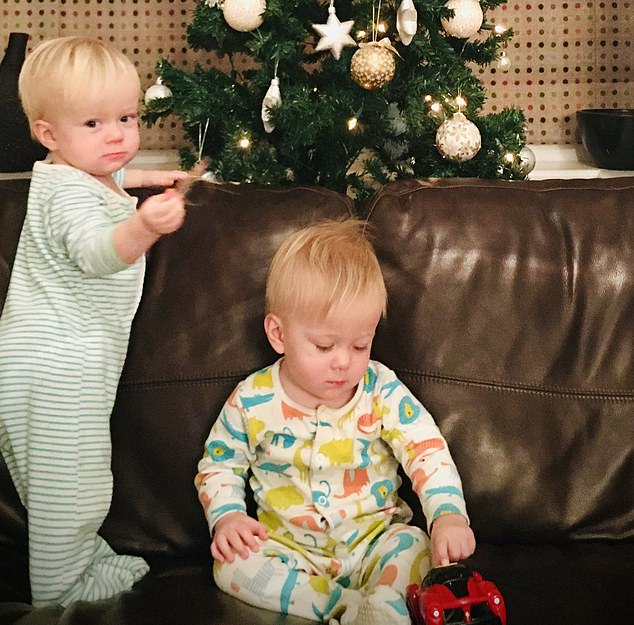 At six weeks old, he underwent two operations to remove a section of his bowel and insert a stoma to divert his colon. Mr Jefferson, whose wife is a primary school teacher, said: ‘He got a little bit stronger, but wasn’t allowed home for Christmas. We brought Edward in to see him, and dressed him in a tiny Santa suit. We put a Christmas hat on Joshua and put them side by side. They were snuggling up, and it really calmed Joshua.’

After Christmas, Joshua had another operation to reverse his stoma and, with Edward by his side, got stronger. He went home in February, and has gone from strength to strength.

Mr Jefferson said: ‘Joshua still needs three-monthly check-ups, but he’s meeting his milestones, just like his brother. They are both strong and healthy one-year-olds who love clapping along to nursery rhymes. They have very different personalities.’

The couple, who have been supported by the Sick Children’s Trust, are thrilled to have enjoyed their first Christmas as a family.

Mr Jefferson said: ‘It’s such a special one for us. Last year, we didn’t know what the future was going to bring.’