The two men arrested in connection to an ambush-style attack on a Baltimore police officer working an overnight shift last week are also charged with shooting a second person, a homicide victim, shortly after allegedly attempting to murder the cop.

Elliot Knox, 31, and Travon Shaw, 32, are both charged for the attempted murder of Officer Keonna Holley – and for the murder of 38-year-old Justin Johnson. Johnson was shot and killed in the 600 block of Lucia Ave, about 10 miles away from where Holley was ambushed.

The officer was shot and wounded at 1:35 a.m. Thursday morning in the 4400 block of Pennington Ave. 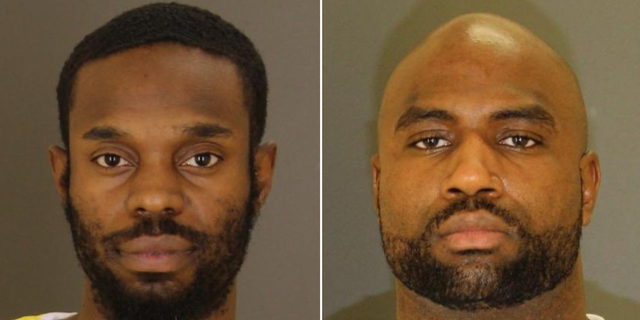 Travon Shaw, 32, (left) and Elliot Knox, 31, (right) are both charged for the attempted murder of Officer Holley, as well as the murder of Justin Johnson.
(Baltimore Police Department )

Harrison said Holley was shot at her designated post while sitting in her vehicle during an overnight shift in the high-crime area of Curtis Bay. Investigators say the shooter approached from behind and fired into the parked vehicle, which then accelerated and crashed.

“What we now know is both shootings are related, as we know now the perpetrators of Office Holley’s shooting, they then left that scene, went to Lucia Avenue and then committed that homicide of Justice Johnson,” Harrison said. “Our thoughts and prayers with his family, who we have spoken to as well.”

Two weapons were recovered believed to be used in both incidents, he said.

“This week’s heinous incidents were another tragic reminder of the culture of violence that pervades Baltimore,” Harrison said Friday. “As I said last night, those who commit these violent, brazen and cowardly acts in our city will be held to account.

Harrison thanked local, state and federal partners who aided in the investigation and said he received a call from U.S. Attorney General Merrick Garland, who “is committing every resource available to help us” and congratulated the team their quick closure of the case.

“In this moment, I cannot overstate how angry and disheartened we all are that we continue to have those in our community who are intent on committing violent acts, especially against law enforcement officers,” Baltimore City’s State Attorney Marilyn J. Mosby said Friday. “It is unacceptable, and we will not tolerate it… We will have zero tolerance for those who seek to use violence and murder to settle their grievances and the criminals that do, will be prosecuted to the fullest extent of the law.”

Holley was rushed to the University of Maryland Medical Center. Dr. Thomas Scalea of the Shock Trauma department said in an update Thursday evening that Holley is “critically ill,” had undergone “operative therapy” and remains in the ICU “on full life support measures” with life-threatening injuries.

“The person who did this to my sister, you are a coward,” Lawanda Sykes, the elder sister of Officer Holley, said at a press conference Thursday evening outside the hospital. “You tried to snuff her and take something that you can’t. She is stronger than you will ever be.”

Holley, who has been on the force for two years, is the mother of two daughters, who stood beside their aunt at Thursday’s press conference.

“Keona Holley is my baby sister. What I need this city to know and understand is before she was a police officer, she’s a mother. She’s a daughter. She’s a sister. She’s a woman,” the officer’s sister continued. “She took on this job, she took on this responsibility. This has been a life-long goal of my sister to serve the Baltimore City Police Department. My sister dedicated herself to this job. She went in early. She stayed later. She spent countless hours away from her children to serve the community in the southern district.”