Home » World News » Battery recycler for Bunnings, Officeworks, could be shut down over safety concerns

A national e-waste business which recycles batteries for Bunnings, Officeworks, Sustainability Victoria and PlanetArk could be shut down after regulators belatedly discovered the company had been running an unlicensed, high-risk facility in Melbourne’s northern suburbs.

Envirostream Australia, which also does e-waste recycling for community group Ceres, has been ordered by the Hume City Council to “cease” and “clean up” its operations at two premises in Campbellfield. 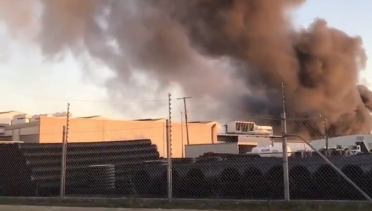 Envirostream’s then Campbellfield warehouse on fire on January 19, 2019.Credit: @demirci376

The company, which is a subsidiary of ASX-listed company Lithium Australia, is also under investigation by the Environment Protection Authority for operating without a licence and by WorkSafe over alleged violations of dangerous goods regulations.

Envirostream’s founder and director Andrew Mackenzie said they were “not aware of the investigations you allege” and the company was “in discussions” with the EPA about obtaining a licence.

“Envirostream continues to work closely with regulatory bodies to ensure its management systems and procedures are equal to or better than industry accepted standards,” Mr Mackenzie said.

Lithium Australia had not publicly announced the existence of any investigations or regulatory issues to the ASX by Thursday afternoon.

Regulators apparently failed to detect until recently that Envirostream had been allegedly operating a recycling facility without a licence, despite the company’s known history of run-ins with authorities dating back 18 months.

In January 2019, one of the company’s Campbellfield warehouses was destroyed in a large industrial blaze which spread toxic smoke across the northern suburbs and contaminated nearby waterways.

After reports from a senior firefighter that the “building was crammed full of batteries and other combustible materials”, the EPA dispatched an investigator to assess the incident and the environmental aftermath.

An EPA report obtained by The Age described the Envirostream facility as an “unlicensed premises” that allegedly contained 100 tonnes of batteries and 200-300 tonnes of ink dust from printer cartridges when the fire broke out.

The EPA, which had been unaware before the fire that Envirostream was operating on the site, declined to comment on why it took no action after the discovery. Fire Rescue Victoria said investigations were ongoing into the circumstances surrounding the fire at Envirostream’s former premises on Colbert Road.

Envirostream came to the attention of regulators again in July last year, after inspections were conducted at its $2 million recycling facility in the regional town of New Gisborne. The Macedon Ranges Shire Council discovered the factory was too close to a residential area and it was forced to close in September 2019.

Lithium Australia announced to the ASX in early 2020 that the closure and relocation of the plant to Campbellfield was done for “improved cost efficiencies”.

The EPA and emergency services did not conduct an inspection of the latest Envirostream facility until May 2020, discovering then the business had no licence despite requiring one as a large-scale operation that could process more than 500 tonnes of electronic waste a year.

“EPA informed Envirostream that it must seek the required approvals. The company has now lodged the appropriate application with EPA which is now being reviewed and assessed,” a spokesman said.

These recycling operations are considered "high risk", according to Fire Services Victoria.

Michael Sharp, director of planning and development at Hume City Council, said its own investigations had led the council to issue “a notice to cease the use and clean up" in July for two sites currently being used by Envirostream in Campbellfield.

Mr Mackenzie did not respond to a request for comment about the council shutdown orders. “We note many of the assertions you make in your email around Envirostream locations and alleged investigations are misrepresentations and factually incorrect,” he told The Age.