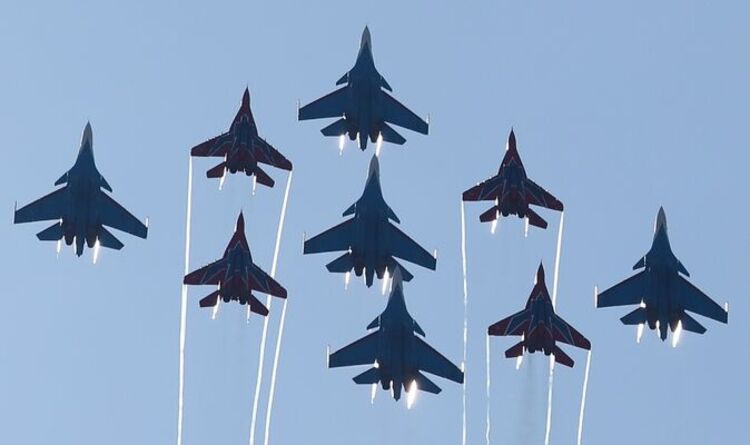 Many in the West had predicted an aerial assault on Ukraine would be a cornerstone of the Russian offensive towards Kyiv. But Russian aircraft have been conspicuously absent from Ukrainian airspace.

Former RAF pilot Andy Netherwood attributed this, for the most part, to Russian inexperience in dominating the skies during a conflict.

He told The Telegraph: “Russia has been hindered by complacent and arrogant planning in the air domain as much as in the land.

“The Russian air force has very little recent combat experience other than Syria.

“You don’t really know how good an air force is until it has to fight a war…[it is] not impressing.”

However, Justin Bronk, an air power specialist at the Royal United Services Institute, warned this could change as the conflict develops.

In a new paper, entitled The Mysterious Case of the Missing Russian Air Force, he wrote air force commanders may be “reluctant to commit the bulk of their potential striking power against Ukrainian troops before political approval is granted to employ unguided munitions to bombard Ukrainian-held urban areas”.

He added: “This indiscriminate form of air attack was standard practice for Russian and Syrian air force operations over Aleppo and Homs, and unfortunately is likely to be employed by the [Russian air forces] over Ukraine in the coming days.”

Mr Bronk continued on to caution that Russian attacks on Ukraine “could easily turn into a protracted campaign”.

Analysts had predicted – as Russia kicked off its assault – that one of the first targets would be to take out Ukraine’s air weaponry and defences.

But Russia’s absence in the skies has mystified experts, with one high-up US defence official offering up one explanation.

They told Reuters: “They’re not necessarily willing to take high risks with their own aircraft and their own pilots.”

There is a risk to Russian pilots that Ukrainian forces with missiles launched from the ground could jeopardise the safety of those operating the aircraft.

The official added that US military intelligence estimates that Russia has deployed just over 75 aircraft over the course of the invasion so far.

They made the caveat: “We do have indications that they’ve lost some (aircraft), but so have the Ukrainians.

“The airspace is actively contested every day.”

On Tuesday, it was announced that Colonel Oleksandr “Grey Wolf” Oksanchenko, a prominent Ukrainian figure who served as the air force’s display pilot between 2013 and 2018, was killed after his plane was targeted above Kyiv on Friday.

And despite the lauding of Ukrainian efforts in fighting off what experts have called a limited air assault, the Ukrainian fleet is far outmatched by the Russian forces.

The Ukrainian military has 210 military aircraft, including MiG-29 combat planes, according to the Independent.

This pales in comparison to Russia’s fleet, which reportedly boasts almost 15 times as many combat planes as Ukraine.

Ukraine has repeatedly called for a Western-enforced no-fly zone in Ukrainian airspace, with Mr Zelensky appealing to the likes of NATO and the EU to enforce the measure to prevent further aerial bombardment from Russia.

But such a move has been ruled out by the UK, NATO and the US, as it would require military enforcement from the West in Ukraine.

NATO Secretary-General Jens Stoltenberg told NBC on Monday: “We have no intention of moving into Ukraine, either on the ground or in the air.”