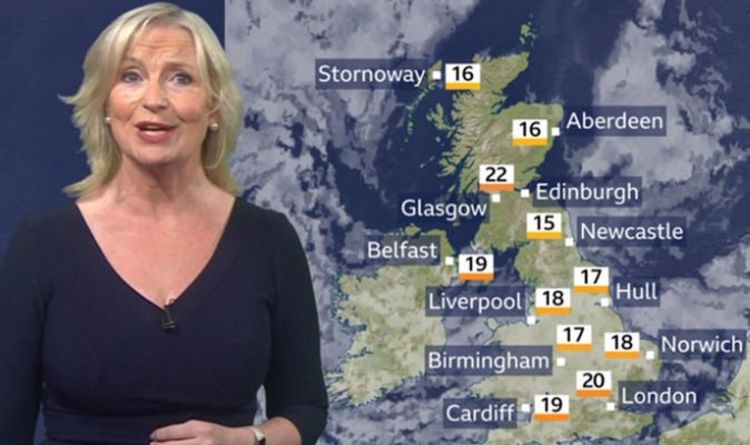 BBC Weather: Drastic change in conditions as weekend to be hot

BBC Weather’s Carol Kirkwood explained a weather front from the Atlantic will not reach the UK this weekend meaning sunny conditions will dominate. Temperatures are expected to be in the 20s. She said: “We do need some sunshine in the forecast. Some of us will see it today and in the next few days but not all of us.

“This time yesterday I was telling you the weather is going to change this weekend as low pressure comes in from the Atlantic bringing in some rain especially on Sunday and into the early part of next week.

“That may well have changed, the low pressure looks at this stage that it slowed up meaning it will be drier and warmer in the south.

“Over the next few days, there is a lot of cloud at times.

“Thick enough for some drizzles and some light and patchy rain in the east but some sunshine especially in Scotland and some western areas.

“This morning there is a lot of cloud but brightening up this afternoon.

“For England and Wales there is a lot of cloud and this is where we’re more likely to see the drizzle but there will be some fleeting breaks in the south.

“Along the North Sea coastline generally temperatures are lower and add on that breeze, it will feel a bit nippy.”

She added: “As we head into the weekend, this area of low pressure may pull back which will have an impact on our weather with temperatures into the 20s.”

Her comments come as a “whirlwind” relative, a “quick-as-lightning” goalkeeper, and a daughter who “leaves a trail of destruction” are among friends, family members, and pets to feature in a new list of storm names.

More than 10,000 suggestions were submitted to the Met Office for the list of names for the strongest weather systems to hit the UK, Ireland, and the Netherlands over the coming year.

The first storm of the year, which runs from September 2021 to the end of August 2022, will be called Arwen, a name thought to be of Welsh origin and popularised by JRR Tolkien’s Lord Of The Rings books.

Kim, Logan, Ruby, and Dudley are among the names put forward by the UK public and selected by the Met Office, along with Met Eireann and Dutch national weather forecasting service the Royal Netherlands Meteorological Institute (KNMI).

A Met Office spokesman said Kim was nominated in recognition of a “whirlwind” relative and a self-confessed weather watcher, while Logan, a name of Scottish origin, was nominated by several parents and grandparents, including a mention of a grandson who “runs through the house like a tornado” and another who is “as quick as lightning” when playing as a goalkeeper.

Ruby made the final cut after being nominated by a pet owner whose cat “comes in and acts like a storm” and a parent whose daughter “leaves a trail of destruction” when she enters the house.

Dudley fought off competition from seven other names beginning with D to top a poll on Twitter after being submitted by a couple who will share the last name of Dudley when they get married in 2022.

Other names on the list – which does not use names beginning with Q, U, X, Y, or Z – include Barra, Corrie, Eunice, Franklin, Gladys, Herman, Imani, Jack, Meabh, Nasim, Olwen, Pol, Sean, Tineke, Vergil, and Willemien.