BBC Weather forecaster Carol Kirkwood warned temperatures could reach -2C in northern towns and cities on Thursday morning. Rural areas will feel even colder than that and the nation will wake up again to widespread frost on Thursday morning. The BBC forecaster also warned of relentless showers hitting southern parts of the country, in England and Wales. She said: “Temperatures around 4C, some parts of Scotland may not even get higher than OC or 1C today. But in the south-west, 9C or 11C.

“As we head on through the evening and overnight, some clear skies particularly in the north.

“A bit more of a breeze in the south, plus we’ve got this rain. So the rain extending through south-England and also across parts of the Midlands, Wales and down into the south-east.

“Aside with that along the south coast and the Channel Islands we could see some showers.

“North of that there will still be some showers, wintery on the hills, but a lot of clear skies.

“Temperature-wise, these are towns and cities you can see (-2C), in rural areas it will be lower than that.” 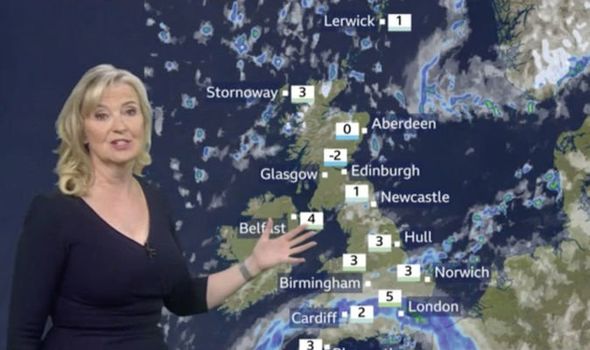 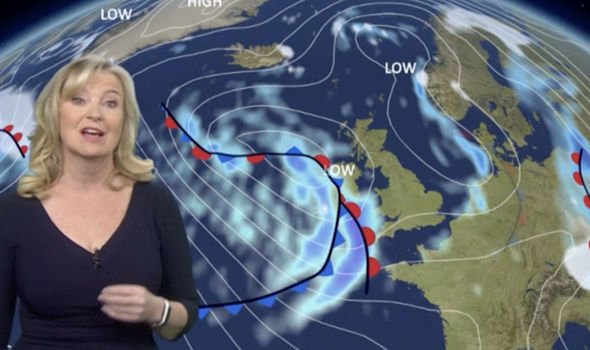 35 flood warnings are still in place across England as Prime Minister Boris Johnson has urged people in affected areas to heed the warnings of emergency services.

The warnings sit alongside a further 80 flood alerts – warning residents to be on alert for possible flooding – after heavy rains over the past week.

The warnings and alerts are in place in locations from Somerset and East Sussex in the South, to as far north as the Lower River Nidd near Harrogate in Yorkshire, and the Holderness Drain in east Yorkshire.

Seven flood alerts are also in place in Wales.

More widespread rain is forecast for Wednesday, with the Met Office having issued a weather warning for heavy rain, bringing possible transport disruptions from late afternoon onwards, across south Wales and parts of England’s south-west.

And Mr Johnson has passed on warnings there could be more flooding across the country this winter as rain continues.

On Tuesday, the Prime Minister announced relief funding would be made available for those affected by the floods.

It came amid criticism the Government had not done enough to help, as the flooding threatened to become an election issue.

He said funding for locals councils to help affected households would be made available to the tune of £500 per eligible household.

Up to £2,500 would be available for small to medium-sized businesses which have suffered severe impacts and which are not covered by insurance.

The PM chaired a meeting of the Government’s emergency committee Cobra on Tuesday afternoon, as pressure mounted on ministers to take action. 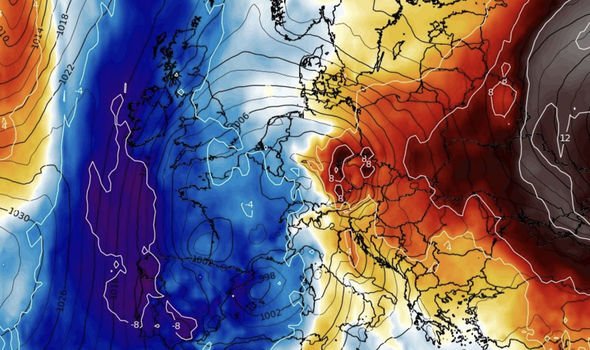 Speaking afterwards, he said the country had to “prepare for more floods” this winter because the ground is so waterlogged.

He said: “The worry for me is that there are some people who are continuing not to listen to the advice of the emergency services.

“I would just say to people – the emergency services do have sound advice. When they advise you to evacuate, you should do so.”

“You can’t trust Boris Johnson to look out for the North or the Midlands or protect our communities from flooding,” he said.

“But Labour will provide an extra £5.6 billion in flood defence funding, to level up flood defences over 10 years.

“Every home ruined and every business destroyed demands we act now.”

Hols from £9.50: What dates can I book my holiday for and why should I use Sun Savers? All you need to know

The Cairngorms is a breath of fresh air for all the family
We and our partners use cookies on this site to improve our service, perform analytics, personalize advertising, measure advertising performance, and remember website preferences.Ok