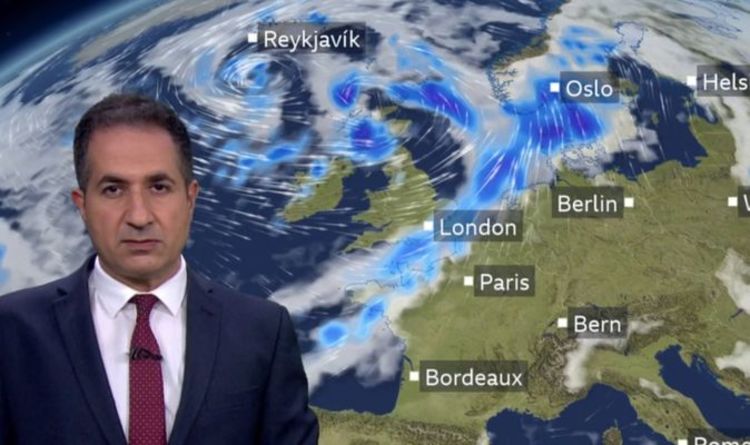 European weather: South to stay warm while North will be wetter

BBC Weather forecaster Stav Danaos warned Europe was in for more wet weather heading towards the weekend. Italy can expect some outbreaks of rain and thunderstorms while other parts of central and northern Europe will see only heavy rain and strong winds. South eastern Europe will also see a drop in temperatures as well as rain and wind.

Spain and Portugal are expected to see some of the warmest temperatures in the mid 20s due to the dry conditions and warm sunshine.

Mr Danaos said: “Apart from a few thunderstorms across southern Italy much of the Mediterranean is fine and settled and dry to end the week.

“But it is all change further north, an active jet is piled up some deep areas of low pressure which will continue to work its way from west to east.

“It will move from Ireland to the UK, northern France, northern Germany, Denmark and Scandinavia and then pushing on into eastern Europe.

“That is only the case on Thursday.”

The BBC weather forecaster noted that in south eastern Europe temperatures would be down in the region.

There would also be outbreaks of heavy rain and some strong winds.

He said: “We could see northerly winds in this area, some showers and more cloud affecting the Balkans.

“Temperatures will be a bit lower here than what we have had to start the week.”

Mr Danaos also spoke of the contrasting weather on the other side of Europe.

He said: “Further west it will be dry, sunny and warm.

“It is a lot more settled across Iberia of late.

UK floods LIVE: Warning in force – heavy downpours batter nation [LIVE]
More than a MONTH’s worth of rain to be dumped in days – flood fears [FORECAST]
BBC Weather: Flood warnings issued as UK to be lashed by heavy rain [MAPS]

“It will be unsettled with wet, windy weather at times for Ireland and the UK and the low countries.”

He concluded: “It will be very wet and windy and unsettled across the northwest on Friday but much quieter further south.

“We should start to see conditions improving across the Balkans and temperatures will be on the rise again.”