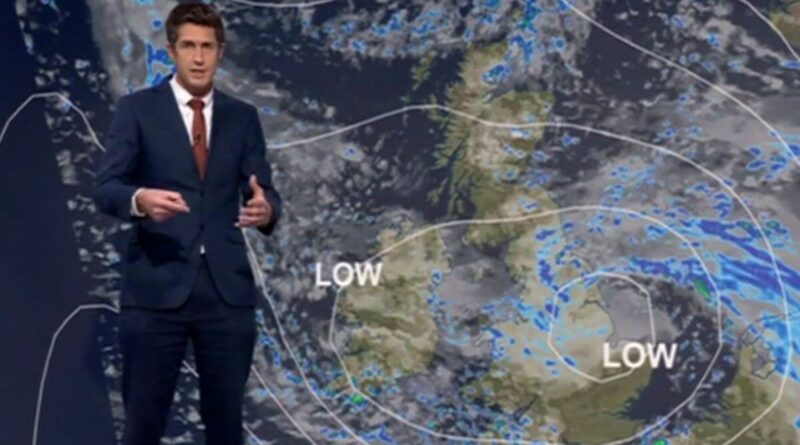 The UK will see more rain across the coming days as temperatures will be around 8C to 10C. He said: “The reason we’re seeing some very large rainfalls totals in the east is down to this very big ridge of high pressure stretching across northern Europe to Scandinavia to Greenland which is effectively stopping out area of low pressure moving through. Looking at the Atlantic, you can see further areas of low pressure set to move in.

“These will follow the same sort of pattern where they move into the UK, become very slow-moving and bring us quite a lot of rain.

“Overnight today’s area of low pressure will slowly ease to a degree with outbreaks of rain becoming lighter and a bit patchier.

“Cold in Scotland with some patches of frost.

“Tomorrow we’ll still have the remains of the low pressure that brought the rain today.

“Most of the rain will be across eastern areas with a few showers coming in to the southwest where it will continue to be quite windy.

“We’ll also have showers across northern areas of Scotland.

“Temperatures around 8C to 10C for many but probably not feeling quite as chilly as it did today on account that the winds won’t be quite as strong.”

It comes as the co-leader of Aberdeen City Council has said climate change doubters should “think again” following a weekend of extreme weather in the north east of Scotland.

Clean-up operations are now underway across the north east after a major incident was announced across the area on Friday evening as a month’s worth of rain fell in just one night.

Hazel Nairn, 71, was swept into the river Don near Monymusk in Aberdeenshire as heavy rain battered the area on Friday, and remains missing.

Roads were closed as a result of flooding as rivers burst their banks and trains were cancelled in the area over the weekend.

Speaking about the aftermath to BBC’s Good Morning Scotland, Alex Nicoll said: “I am a firm believer that climate change is underway and we have to do everything we can to minimise it.

“So I think anyone who doesn’t have serious concerns about climate change, maybe needs to think again.”

Water levels in rivers around Aberdeenshire have begun to fall but still remain high in some areas. Members of the public have been urged to take care.

The chief executive of Aberdeenshire Council, John Savage, said the levels had not been “this high” in a number of years.

Mr Savage told Good Morning Scotland: “We had record levels of water in the Donside area, really high in the Deeside areas. So very extensive rain over a couple of days.

“The rivers were pretty high as we saw some and a lot of surface water coming off fields in the higher ground that caused some problems, primarily for our roads and our sort of landscape area.”