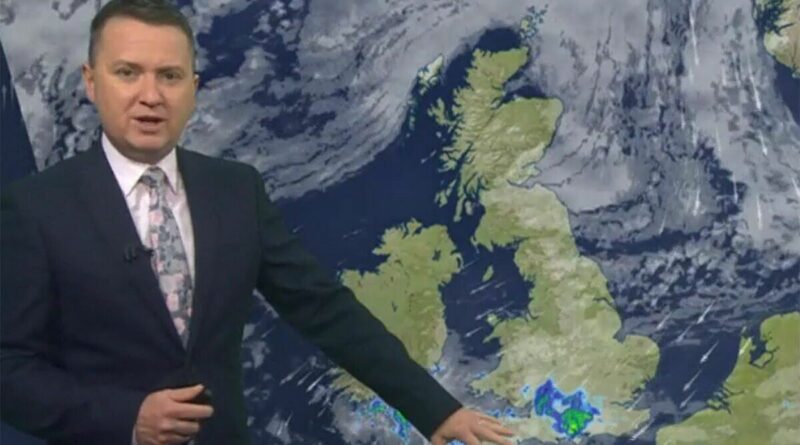 The latest BBC weather forecast has sparked concern for people’s bank holiday plans as well as the Queen’s Platinum Jubilee celebrations. BBC weather presenter Matt Taylor warned that “thundery rain” could disrupt plans across the country this weekend. The rapidly changing forecast could see highs of 24C today in the south of England before rain and thunderstorms on Saturday and Sunday.

The Met Office is even considering putting out a weather warning for Saturday, with heavy and thundery showers likely in southern England.

These showers look set to extend into Sunday, according to the forecast.

While today will remain warm and dry for Wales and England, parts of Northern Ireland and Scotland are already experiencing showers this morning.

JUST IN: Fears for missing British North Sea tanker after an HOUR

The change in the forecast will come on Friday evening when clouds from France “push their way northward”.

Mr Taylor warned BBC viewers that the “heavy, thundery downpours” could “cause some problems” for southern areas on Saturday and Sunday.

He said that the patchy nature of the weather front means some areas of southern England and Wales will miss out on the rain, but “it’s hard to predict where”.

The BBC meteorologist added: “The weather front will continue to nudge its way northwards, but it is fragmented and patchy.

“The next batch of storms on Saturday night could cause even more issues into Sunday.

“The further north you are, the more likely you could get through Saturday and Sunday without seeing rain.”

The threat of thunderstorms could spoil performances from Queen, Alicia Keys, and Diana Ross at this weekend’s Jubilee concert at Buckingham Palace.

Sir David Attenborough, Emma Raducanu, David Beckham, and Stephen Fry will also make appearances, and there will be a recorded performance from Sir Elton John.

On Sunday, 10 million people across the country are expected to take part in outside street parties and celebrations for the Big Jubilee Lunch.

Met Office deputy chief meteorologist Rebekah Sherwin echoed the BBC forecast, saying: “Southern areas are likely to see a spell of showers on Saturday and Sunday, which could turn heavy and thundery at times.

“However, there will also be some breaks in the cloud even here, and northern areas are most likely to stay fine and dry.”