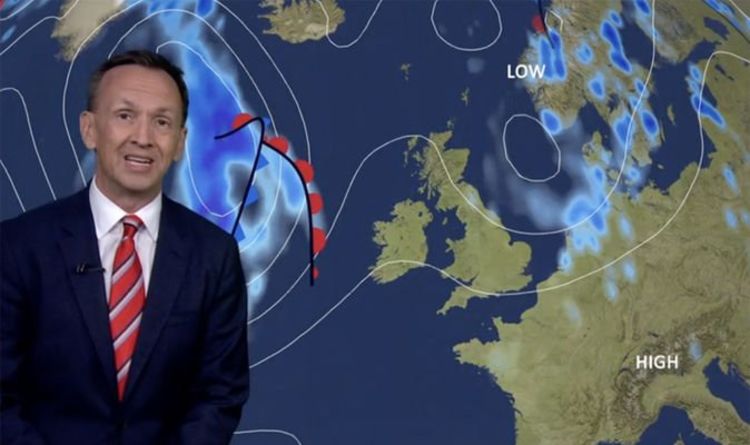 BBC Weather: UK set for intense downpours in some areas

Britons are braced for a weekend washout as heavy and intense thunderstorms grip the country. The latest BBC weather forecast showed an area of low pressure will wreak havoc across the UK this weekend. However, BBC meteorologist Nick Miller said that there will be a 48-hour warm and summery break from the thunderstorms by Tuesday – before another wave of thunderstorms hit.

Mr Miller told BBC Breakfast viewers: “There will be lots of talk about heavy showers in this forecast but there will be some drier, sunnier moments too.

“Some areas on Friday will be dealing with heavy, intense thunderstorms particularly across northern parts of the UK.

“To the south, the winds are stronger so the showers move through move quickly.

“There could be gusts of up to 40 to 45 mph across southern Wales and England.”

He continued: “But if you’re at the centre of this low pressure – Scotland, Northern Ireland, northern England – the showers hang around for longer.

“The rain totals will mount and these intense downpours could cause some flooding in some areas.

“Temperatures will be up to around 22C in East Anglia, but most places will not be getting that high though.

“Nothing really changes on Saturday. There will be some sunshine around at times but there will be heavy, thundery showers as well.

“On Sunday, this area of low pressure is still here. This will be most intense in eastern Scotland.

“In the south, we could be back to a picture of fewer showers, and more sunny spells.”

He said that the torrential downpours and thunderstorms will fade by Tuesday, adding: “This area of low pressure looks to finally get out of the way by Tuesday.

“That will allow us a couple of fine and sunny days before another area of low pressure comes in later next week.”

The Met Office has issued severe weather warnings, saying some areas in the UK, particularly the north-west of England and north Wales, could see as much as 80-100mm of rain on Friday.

Despite the weekend washout, Portuguese forecasters have predicted that an African hot plume will bring an extreme heatwave to Europe and temperatures could hit 30C in the UK within a fortnight.

However, the Met Office says confidence in the forecast is “low”.