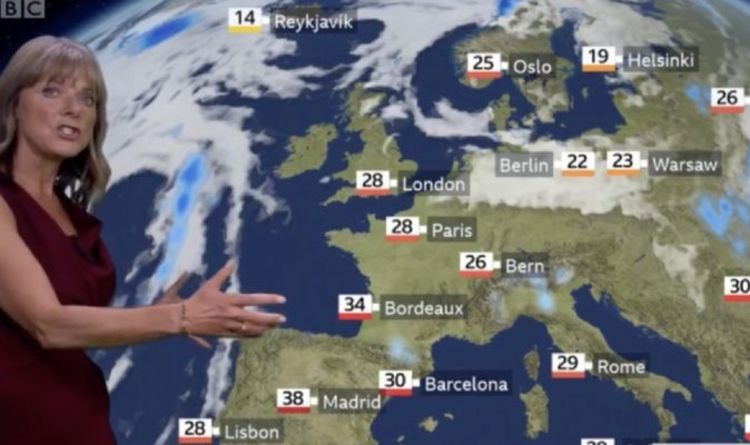 BBC Weather forecaster Louise Lear said Europe can expect more hot weather across the continent. This is most notably in Spain which can expect to see temperatures just shy of 40C this week. Elsewhere in the continent, it remains mostly dry with parts of eastern Europe seeing some wet weather and occasional thunderstorms.

Ms Lear said: “High pressure is expected to build in from the west of Europe over the next few days and quieten the weather story down.

“Thunderstorms could return as we head into the weekend.

“You can see quite clearly where the showers are at the moment.

“They are stretching out of Hungary and the Balkans and they will gradually move to Romania and Bulgaria by the time we get to Tuesday afternoon.

“Behind it though there will be plenty of dry weather, particularly in Spain.”

The BBC Weather forecaster explained the severity of the weather situation in Spain over the next few days.

“She said: “Through Wednesday there will be plenty of dry settled weather conditions around.

“The heat is set to build in inland Spain and temperatures will reach close to 40C in some places.

“That heat continues to move its way upwards through the west coast of France as well.”

She said: “As for Turkey, the Greek isles and mainland Greece it is fine settled story as you would expect for this time of the year.

“There will be some sharp showers that will be moving towards this area from Romania and Bulgaria.”

Much of central Europe will remain dry and sunny throughout the week, however.

The Scandinavian nations will also seem warm weather with temperatures remaining above 20C as the heat subsides.

The forecaster closed by saying: “Not as hot as it has been in Scandinavia with temperatures easing back down to where they should be.”