The Duke of Edinburgh strode into church to see his grandson get married today – just six weeks after his hip replacement.

Prince Philip, 96 was all smiles as he got out of his car with the Queen and walked into St George’s Chapel, Windsor this morning.

Despite assurances from Buckingham Palace about his rude health in the run-up to the big day, many eyes were still fixed on the state Bentley as the Queen and her consort clambered out.

He walked unaided but looked slightly tired as he waved to spectators eager to see Prince Harry and Meghan Markle tie the knot. 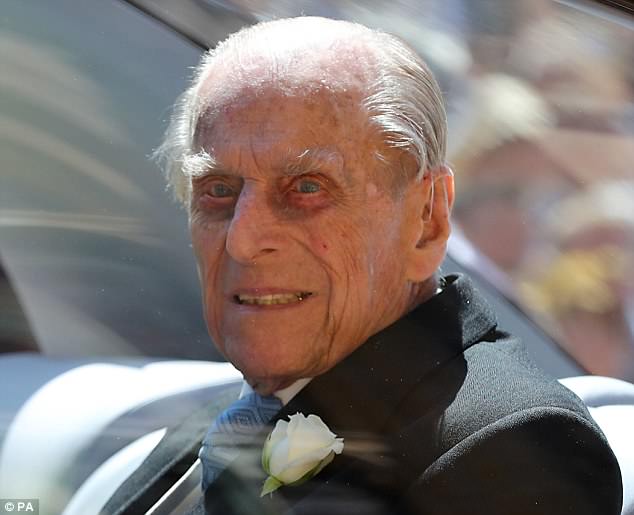 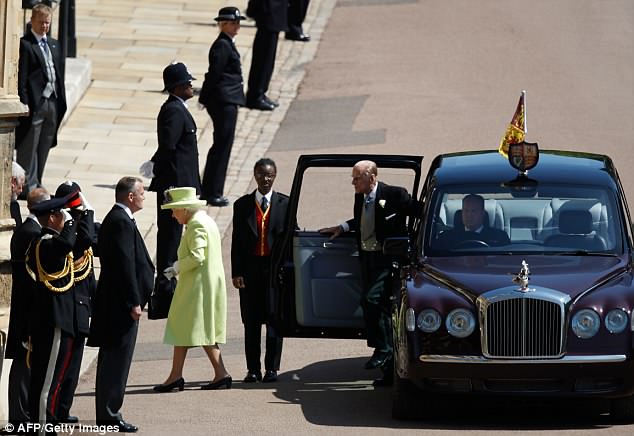 The Duke of Edinburgh, 96, is pictured climbing out of his Bentley with Her Majesty the Queen

In contrast, former prime minister Sir John Major, 75, appeared to surprise some on social media after he was seen entering the chapel with a walking stick.

Today he was sat in the second row next to the Queen and behind Prince William, Prince Charles and Kate Middleton, the Duchess of Cambridge during the ceremony.

He wore a black suit, white shirt, blue tie and a white corsage, while the Queen sported a lime green suit with purple detailing on her hat.

Having retired from royal duties last August, the Queen’s husband was admitted for hip surgery at King Edward VII hospital in London on April 3.

He had surgery to replace his hip joint with a prosthetic implant the next day and was discharged on April 13. 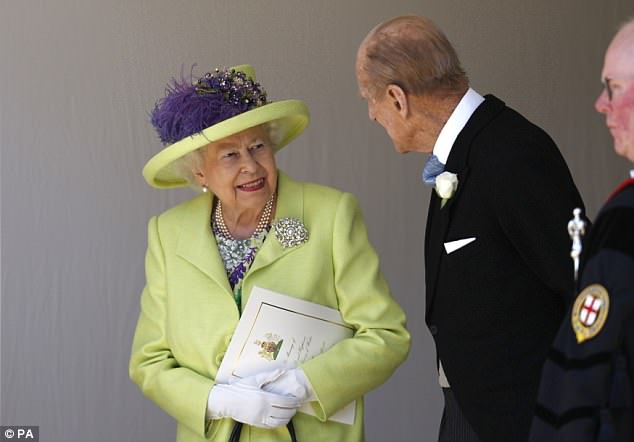 The Duke was dressed in a black suit and white corsage, while the Queen opted for a lime green suit with purple detailing on her hat 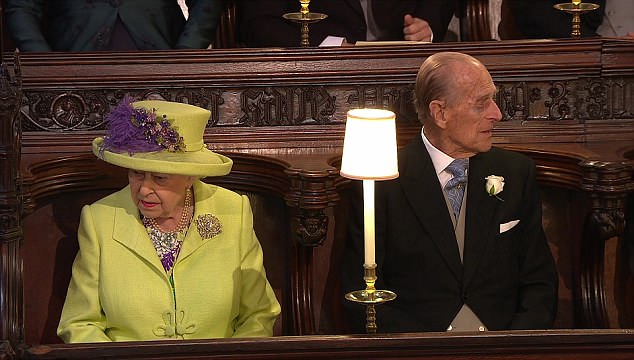 Pictured: The Queen and Duke of Edinburgh sat in the second row during the ceremony 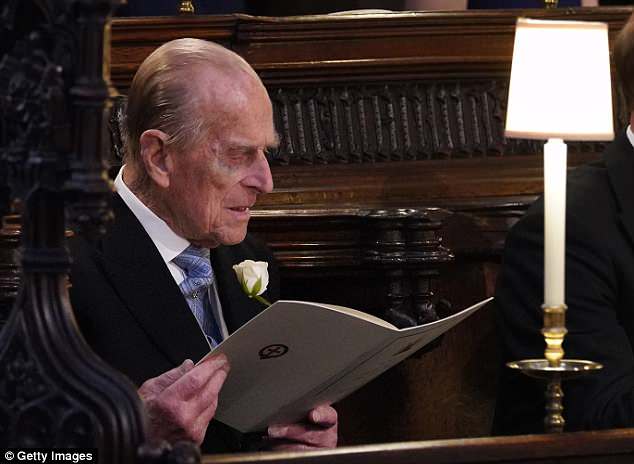 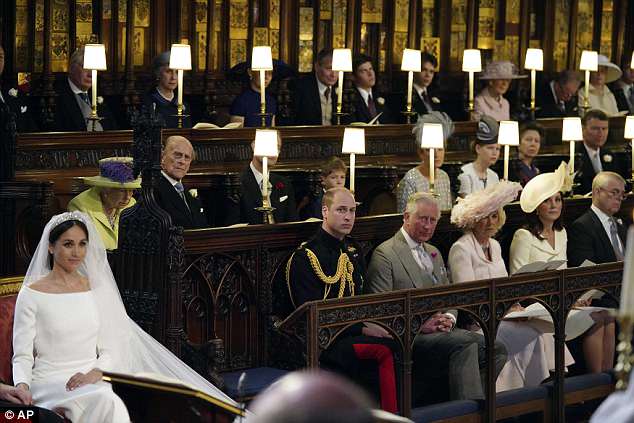 He (third left) was sat in the second row next to the Queen ánd behind Prince William, Prince Charles, Camilla and Kate Middleton, the Duchess of Cambridge

At the time of the procedure, Buckingham Palace said the surgery to replace the joint had been a success and Philip was ‘comfortable and in good spirits’.

The duke will have spent the past six weeks on a rehabilitation programme, starting with moving with the aid of a stick or crutches and gradually progressing towards increased mobility.

There was no guarantee he would be well enough to attend today’s wedding, but fans breathed a sigh of relief when he was seen out at the Royal Windsor Horse Show last week.

Experts predicted he would use a cane or stick to help get him through the day, but he strolled confidently in and out of the chapel as thousands watched on.

But his fitness was underlined further when he waved enthusiastically to the crowd as he left the chapel on Saturday, seated in the back of the state car alongside his wife. 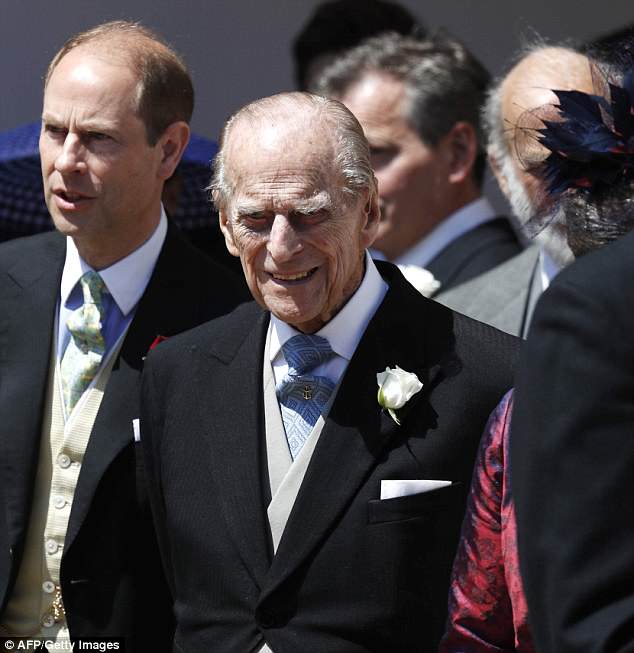 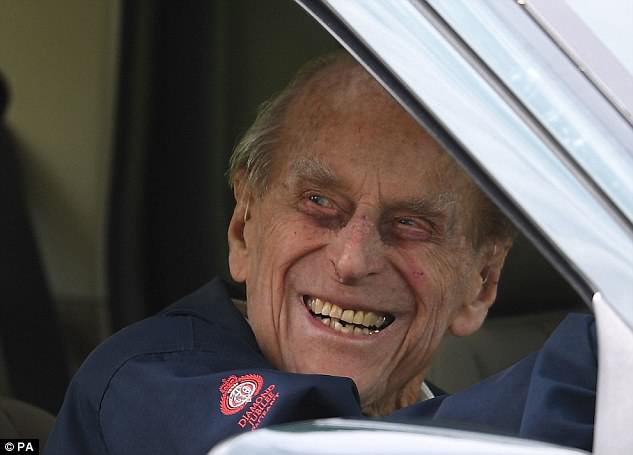 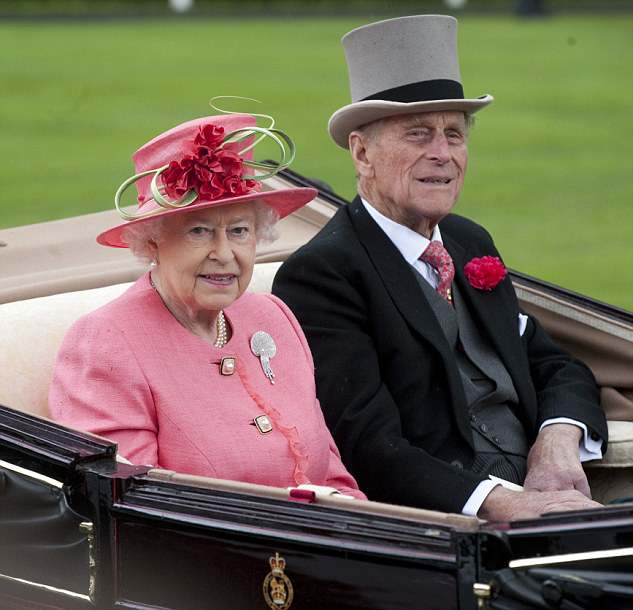