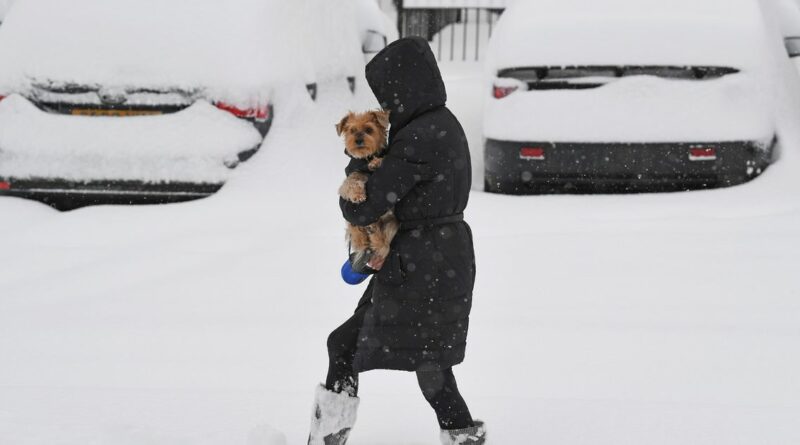 Winter threatens to blast back this weekend driven by a -10C mini Beast of the East.

Temperatures will continue to nosedive through next week as parts of the country brace for snow.

Meteorologists are nervously watching rising temperatures in the atmosphere above the North Pole.

A so-called stratospheric warming could be strong enough to split the Polar Vortex – the dome of air over the Arctic-triggering the freeze.

James Madden, forecaster for Exacta Weather, said: “It may have an impact on the jet steam and our weather bringing an easterly weather pattern into spring.

“Wintry weather and snow are likely through the start of March, particularly in parts of the north and west.

“Some of these outbreaks could become more widespread reaching further south.

“The potential is there for another snowy blast.”

He said: “The Polar Vortex is facing a stratospheric warming event, which will be strong enough to cause a temporary split of its outer core.”

Temperatures will slide below normal this weekend before the cold bites hard next week.

Bitter easterly winds will make it feel closer to -10C in parts of the country, according to forecasting models.

Met Office meteorologist Aidan McGivern said: “A more widespread frost will start the day on Sunday and temperatures will dip just below average.

“Low pressure is edging closer and that could bring further outbreaks of rain and some strengthening winds.

“High pressure is bringing increasingly cold air in from the east with a cold trend through the weekend and into next week.”

Fellow Met Office meteorologist Alex Deakin added: “There could be showers on Sunday and some snow over the Brecon Beacons.

“Temperatures will be below average, and that easterly wind is going to make it feel really quite cold.”

It comes as government meteorologists confirm it has been the eighth warmest winter on record, with February’s temperatures around 2C above average across England and Wales.

Dr Tim Legg of the Met Office’s National Climate Information Centre said: “The relative drama of the latter part of February belies the fact that the majority of the winter was fairly benign in terms of weather events, with relatively few frosts and little widespread wintry weather.

“However, once again we have seen a winter warmer than average, with the season’s average temperatures in the top ten warmest since records began.”

Ladbrokes have slashed the odds to 2-1 on this month smashing the books for the coldest on record.

Spokesman Alex Apati said: “Brits soon look set to be battered by heavy snowfall, and the latest odds suggest a record-breaking March could be on the cards as a result.”