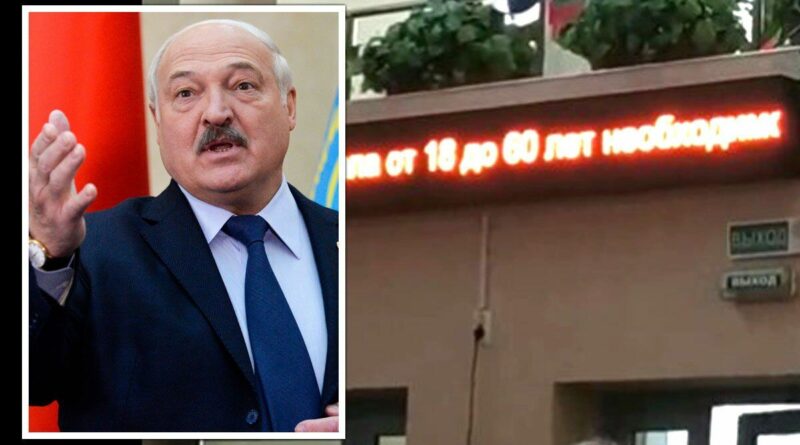 Fears that Belarus could be about to mobilise soldiers against Ukraine have been resparked after a video at a bus stop sign demanded “all male citizens attend enlistment office”. The video, shared on social media, showed the message being broadcast at a bus station in the city of Barysaw, around 45 miles northeast of the capital Minsk, on Wednesday. Commentators have speculated over the meaning of the announcement given it is no longer 2022, when military checks were due to be completed in Belarus.

At the Barysaw Bus Terminal, an electronic announcement ran a message across its board calling for men of fighting age to see an enlistment office.

The message read: “All male citizens from 18 to 60 years old must come to an enlistment office or village executive committee to clarify their data.”

The clip was reposted by a journalist from Minsk, Hanna Liubakova, who captioned the post, “What on earth is that?”

Another user, called MarqS, who writes about Ukraine to more than 100,000 followers, responded that he believed the message was linked to ongoing military exercises in Belarus.

As is custom each year, men between the ages of 18 and 60 are required to have their eligibility for military service completed, and the callup to do that was made in October.

The Belarussian MoD had declared that those call ups would be complete by the end of the year, but it is possible that delays have caused officials to extend the deadline.

It is also possible that the electric announcement was a hangover from 2022 that had been forgotten and not taken down.

MarqS acknowledged that these options appear to be the most likely but suggested it is also possible the sign could be more ominous.

He wrote: “Then again, many think (general) mobilisation will start in Russia by tomorrow, maybe in Belarus, too?”

Though Belarus has acted as a launching pad for Russian forces and missiles travelling into Ukraine, it is yet to involve itself directly in the conflict.

Alexander Lukahsenko, a close ally to Vladimir Putin and reliant on Russia to remain in power, has walked a thin line, attempting to appease his backer without alienating the rest of Europe.

But tensions rose again last week when Belarus blamed Ukraine for a downed missile on its border, suggesting that the incident could be a provocation by Ukraine’s Armed Forces.

Joint military drills with Russian forces in the final two months of 2022 in Belarus also sparked concern that Lukashenko’s resistance to involve his soldiers was waning.

Ms Liubakova, who shared the video, said the recent bus stop announcement could be “interpreted as potential preparation for future mobilisation”.

She told Newsweek: “It can be interpreted as potential preparation for future mobilisation. However, today there are no signs of the beginning of real mobilisation in Belarus, although we can’t exclude such a scenario.”

Others have suggested that the video is the latest in a bait attempt to keep Ukrainian forces stationed on their northern border.

By hinting at the possibility of Belarussian’s joining the war, advancing on Kyiv from the north, Ukrainian soldiers are obligated to await nearby in case of an attack, preventing them from fighting on the frontline.