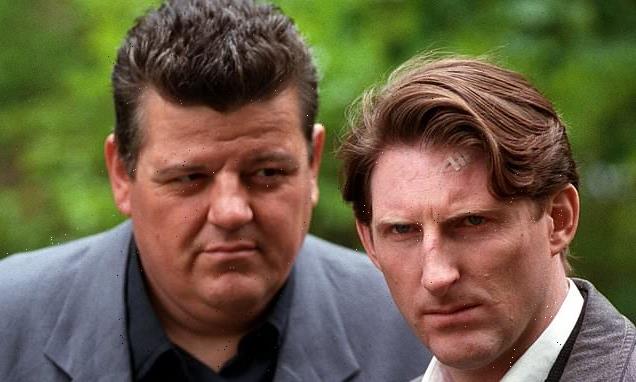 A giant personality on and off the screen: How Robbie Coltrane drank a bottle of whisky a day, married a woman two decades his junior and was almost expelled from ‘Scotland’s Eton’ for hanging prefects’ gowns from the clock tower

As fans of Harry Potter and James Bond knew well, Robbie Coltrane could be a hero one minute and a villain the next.

He was avuncular Hagrid, the lumbering giant gamekeeper at Hogwarts in the Harry Potter films, but also the unscrupulous ex-KGB agent and Mafia boss Valentin Zukovsky in two Bond films, GoldenEye and The World Is Not Enough.

And as Dr Eddie ‘Fitz’ Fitzgerald in the 1990s series Cracker, the show that sealed his fame, he was something in between good guy and bad guy – a foul-mouthed, chain-smoking and faintly menacing criminal psychologist who almost despised the police as much as he did the criminals.

Indeed, ‘faintly menacing’ could apply to almost everything he did in an acting career that tragically ended with the announcement last night that he had died aged 72 in hospital near Falkirk.

His agent Belinda Wright described Coltrane as a ‘unique talent’, adding that his role as Hagrid ‘brought joy to children and adults alike all over the world’.

She continued: ‘As well as being a wonderful actor, he was forensically intelligent, brilliantly witty. After 40 years of being proud to be called his agent, I shall miss him.’

Harry Potter creator JK Rowling described him as an ‘incredible talent’ and a ‘complete one-off’. 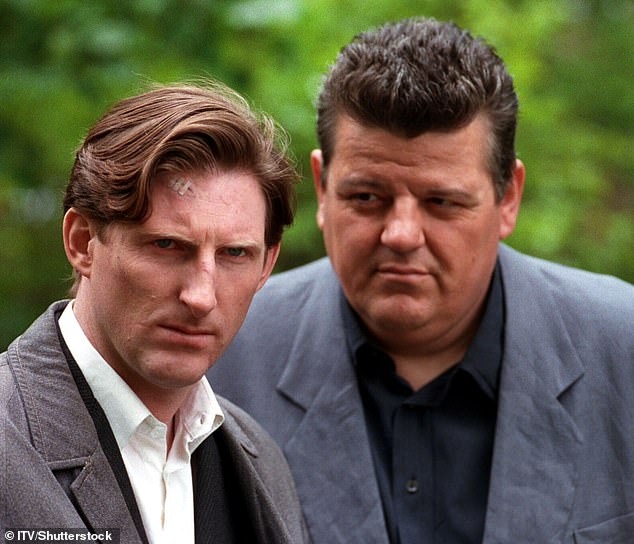 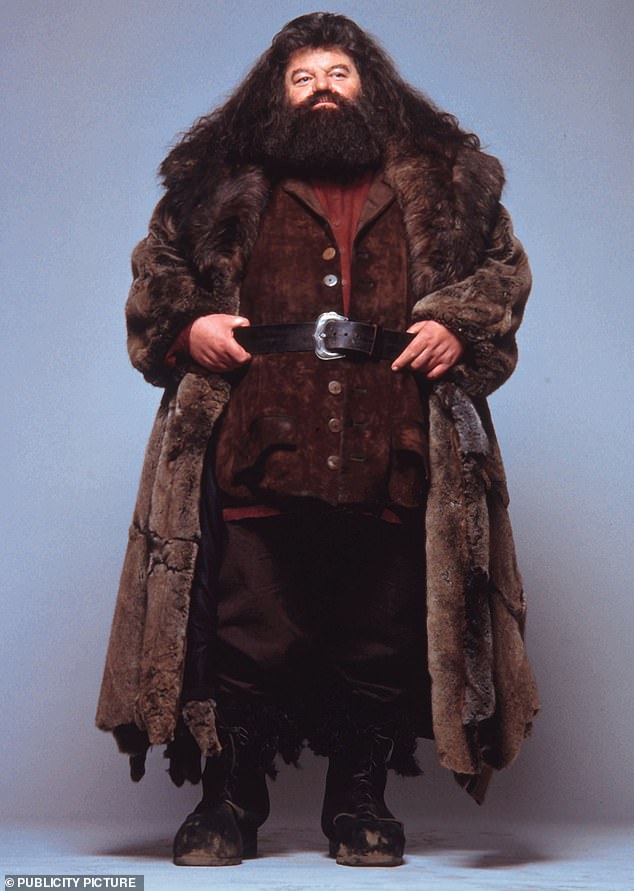 His agent Belinda Wright described Coltrane as a ‘unique talent’, adding that his role as Hagrid ‘brought joy to children and adults alike all over the world’ 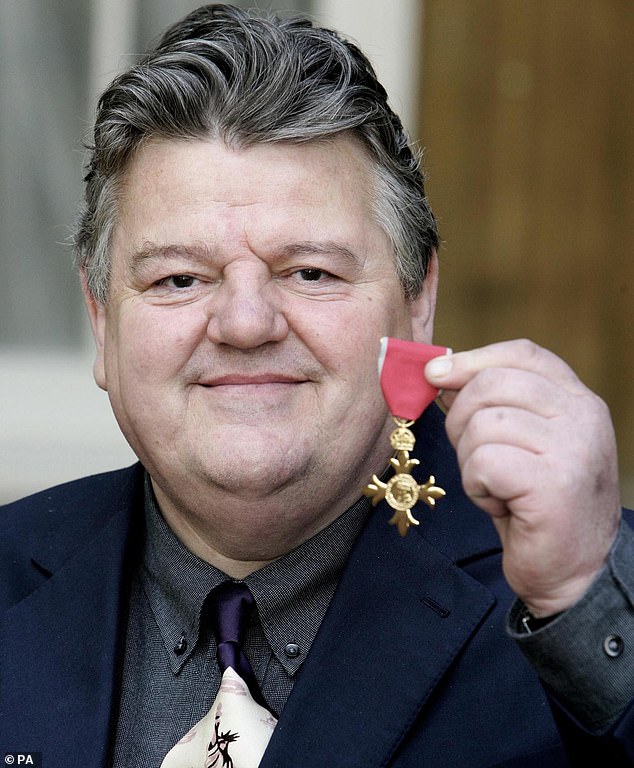 Stephen Fry remembered their first appearance together in the 1983 comedy Alfresco and said Coltrane was ‘funny enough to cause helpless hiccups and honking’.

Offscreen, he could be as versatile as he was onscreen – leaving interviewers never quite sure whether he would be the former stand-up comedian and have them in stitches, or the truculent misanthrope who would bite their heads off for asking a ‘silly’ question.

‘Robbie was capable of asserting a presence that was genuinely dangerous,’ said Cracker producer Gub Neal, explaining why he cast him as the star.

‘It’s partly a physical thing — if he didn’t like you, he could hurt you — but he also has an intelligence that could abuse you.’

He drank heavily – a bottle of whisky a day, he claimed at one stage. He dabbled with drugs and ate to excess – his binge eating once taking his weight to more than 20 stone.

His friend, the late actor John Sessions, said Coltrane had a ‘strong self-destructive streak’ and a ‘deep, driving melancholy’. Coltrane once said of himself: ‘Booze is my undoing. I can drink a gallon of beer and not feel the least bit drunk.’

He was also pugnacious – in his hell-raising heyday in the 1990s he was known to bite a chunk out of a wine glass and swirl it around his mouth.

However, as with so many actors, his public image was very far from the truth. The man who came to epitomise hard-bitten, working class Glaswegian toughness was actually the posh-accented product of one of Scotland’s smartest boys’ boarding schools.

Coltrane, whose real name was Anthony Robert McMillan (he adopted his stage name from his favourite jazz musician, John Coltrane), was raised in the smart Glasgow suburb of Rutherglen by his Calvinist parents.

He claimed his father was so busy working as a police surgeon that he barely spoke to his son until he was six. He died of lung cancer when Coltrane was still a teenager.

He was packed off to board at Glenalmond College in Perth and Kinross, sometimes called Scotland’s Eton.

A class warrior even at an early age, Coltrane liked to complain bitterly about how he rebelled against the pointless rules there – he said he was almost expelled after hanging some prefects’ gowns from the clock tower.

At Glasgow School of Art, where his accent earned him the nickname ‘Little Lord Fauntleroy’, he felt more at home. There he acquired another soubriquet –’Red Robbie’ – in tribute to his support for the Labour Party and vehemently anti-Tory views.

But art was not his thing and he dropped the subject. ‘It was a horrible feeling. The ideas were not there on the canvas at all,’ he recalled. So he turned to comedy and acting, moving to London and living in a squat.

He tried some stand-up and slowly began acting parts, an early break coming in, of all things, Are You Being Served?. His first film role was credited as ‘Man at Airfield’ in the 1980 action adventure Flash Gordon although his first serious role was in the drama Mona Lisa six years later. 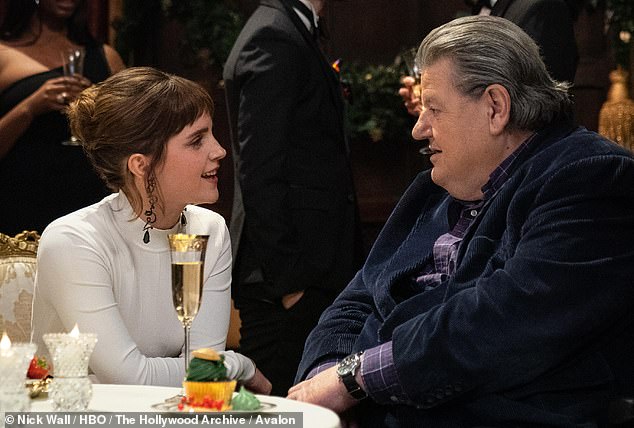 Robbie Coltrane (right) catches up with Emma Watson, who played Hermione in Harry Potter, at this year’s 20th anniversary celebrations

He was more successful on TV: The 1980s saw him become an increasingly familiar part of the alternative comedy team along with Adrian Edmonson, Rik Mayall and Jennifer Saunders, with appearances in TV shows such as The Comic Strip Presents, The Young Ones and Blackadder.

Coltrane struggled with alcoholism and his artist girlfriend Robin Paine said she ended a long on-off relationship with him because she couldn’t cope with his lifestyle.

His attempts to break into Hollywood with two underwhelming films – Nuns On The Run and The Pope Must Die – convinced Coltrane he needed to move away from comedy into more serious roles.

Jimmy McGovern, who wrote Cracker, wanted Robert Lindsay for the role but Coltrane was perfectly suited. It won him three consecutive Bafta awards. 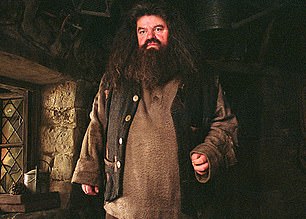 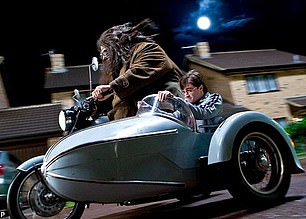 Coltrane played Hagrid, the Hogwarts Gamekeeper, in all eight of the Harry Potter films and was the first to be cast in the movies after JK Rowling personally picked him out

They married in 1999 only to split up four years later. Famously private, Coltrane rarely opened up about his personal life but admitted: ‘You can’t live the life of an existential hero and be a good father.’

When casting started for the first Harry Potter film in 2000, JK Rowling insisted that Coltrane be given the part of Hagrid.

‘Robbie is just perfect for Hagrid because Hagrid is a very loveable character but he had to have a certain toughness underneath,’ she said. ‘I think Robbie does that perfectly.’

He continued to suffer health problems. In January 2015, he was taken to a Florida hospital after experiencing flu-like symptoms on a transatlantic flight to attend a Harry Potter theme park event.

Coltrane rarely liked to reveal he had a soft side but the huge icon he became with children because of Hagrid clearly affected him.

He became emotional at a televised reunion of the films’ stars which aired earlier this year.

‘The legacy of the movies is that my children’s generation will show them to their children,’ he said.