Commons Speaker John Bercow faces calls to QUIT amid claims he bullied senior aide who was then paid £86,000 to keep quiet 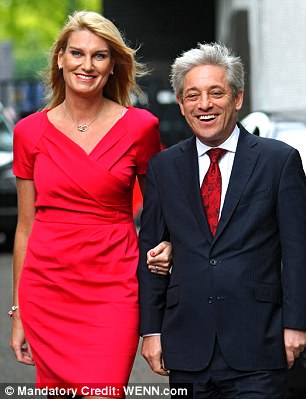 John Bercow, Speaker of the House of Commons, with his wife Sally in London

John Bercow is facing pressure to quit today after a former aide said he had been bullied and then received a £86,000 pay-off to keep quiet.

Angus Sinclair said he was repeatedly undermined by Mr Bercow, finding himself the victim of angry outbursts, foul-mouthed tirades and mimicry.

On one occasion an incandescent Speaker threw down his mobile phone during a row, shattering it.

Tory MP Andrew Bridgen said Mr Bercow should ‘consider his position’ and questioned whether he could remain in charge amid a wider probe into bullying at parliament.

Other MPs privately say there is a growing feeling the position of the Speaker – who denies the claims – is hard to sustain.

‘It is a matter for the House of Commons as a whole to decide what to do,’ he added.

Mr Sinclair, who was Mr Bercow’s private secretary, claimed that the Speaker was prone to ‘over-the-top anger’.

‘I’m not sure he was completely in control of it,’ Mr Sinclair said.

‘The arms would wave around.’ Mr Bercow has previously faced claims that another private secretary, Kate Emms, left her job after less than a year after being signed off with post-traumatic stress disorder.

After leaving his job in 2010 Mr Sinclair received a lump sum of £86,250 from public funds as part of a deal that required him to sign a non-disclosure agreement.

But last night he breached the terms of the deal, saying it was in the public interest for the nation to know what the Speaker was really like.

The former aide told BBC2’s Newsnight: ‘I thought to myself, it’s in the public interest to know why I left. Yes, it breaks that non-disclosure agreement, but it’s the truth. There was bullying.’

Mr Bercow’s office strenuously denied the bullying claims, saying many of his other staff had been happy to work with him for years.

The revelations come weeks after it emerged that a judge-led inquiry into alleged bullying and harassment of Commons staff would not investigate individual complaints.

It led to claims that the probe, ordered by the House of Commons Commission, will be nothing more than a whitewash. The Commission is chaired by the Speaker. Angus Sinclair, who said he was repeatedly undermined by Mr Bercow, finding himself the victim of angry outbursts, foul-mouthed tirades and mimicry

Mr Sinclair served for 30 years in the Royal Navy and joined the House of Commons in 2005 as the private secretary to Michael Martin, the previous Speaker, who died on Sunday. Mr Bercow succeeded him in 2009.

As well as running the Speaker’s office, the private secretary also has a role in the Commons chamber, assisting him in his duties.

Describing Mr Bercow’s behaviour, Mr Sinclair said: ‘The Speaker responded in a way that I can only say is a form of bullying.

‘And that is to show anger, to thump the table to say that someone has failed in front of others. It seemed to get more frequent.’

Newsnight said other Commons staff have corroborated the account, saying he was undermined in meetings and held responsible for things that were beyond his power.

Mr Sinclair also recorded examples of the bullying in his diary.

He added: ‘There was one afternoon I was working at my desk and he came in and was absolutely furious about something.

‘He asked for some information from another part of the House.

‘It had been very slow coming and I’d prodded for an early resolution and he knew that but he held me responsible.

‘There was a lot of bad language and suddenly his mobile phone which he’d been holding was flung on the desk in front of me and broke into a lot of bits.’

Mr Sinclair says that after the 2010 general election he was called in to see Mr Bercow who told him he was going to ‘redesign the office’ and that he would not be needed.

He was given a ‘compulsory early retirement’ with a severance package worth £86,250, which was more than a year’s pay.

The payment was explicitly dependent on his signing a non-disclosure agreement that would bar him from speaking to the media or raising a complaint about his treatment.

Mr Sinclair said: ‘I can only think it was because of the detail of what had happened, you know, the bullying and the manner of my leaving. What I’d done was sign a cover-up.’

He was replaced in the role by Kate Emms, who it has been claimed was diagnosed with post-traumatic stress disorder after less than a year of working for Mr Bercow. The Speaker has also denied bullying her.

North West Leicestershire MP Mr Bridgen told Today: ‘I think, at a time when we are looking for culture change in the House of Commons with regard to bullying and harassment, I think that’s very difficult if the titular head of that organisation is mired in these allegations.’

A spokesman for the Speaker’s Office told Newsnight: ‘Mr Speaker strenuously denies that there is any substance to any of these allegations.

‘Mr Speaker has a superb team of dedicated, effective and long-serving staff – five of whom have worked for him very happily for a combined total of over 40 years.’