Washington: President Joe Biden has lashed out at the US Supreme Court for “outrageous behaviour” and said he would support overhauling Senate voting rules to make it easier to enshrine abortion protections into law.

Speaking in Madrid as he wrapped up a trip with NATO allies, Biden also acknowledged that the court’s decision to overturn the constitutional right to have an abortion had sparked instability across the country, but rejected suggestions it had affected America’s standing on the world stage. 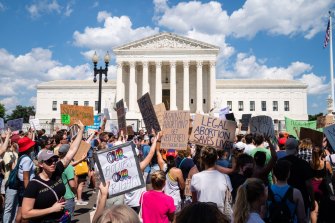 Abortion rights demonstrators chant outside the US Supreme Court in Washington DC on Saturday June 25, 2022.Credit:Bloomberg

“America is better positioned to lead the world than we ever have been,” he said. “But one thing that has been destabilising is the outrageous behaviour of the Supreme Court of the US in overruling not only Roe v Wade, but essentially challenging the right to privacy.”

After days of pressure within his own ranks, Biden said he would support temporarily changing the Senate filibuster rule to make it easier to codify national abortion protections. At present, the rule requires at least 60 votes to pass legislation, but the Democrats only have 50 votes, as do Republicans.

While it is highly unlikely the Democrats would be able to tweak the filibuster without the backing of Joe Manchin and Kyrsten Sinema, two key Democrats who have traditionally resisted changing the system, Biden’s shift is nonetheless significant, as he has spent much of his career not wanting to alter the rules and has previously described doing so as “arrogance of power.” 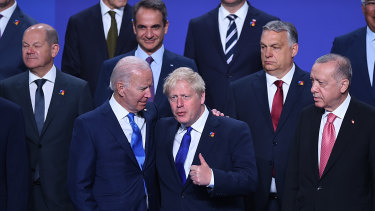 Joe Biden chats to British Prime Minister Boris Johnson during a family photo at the NATO summit in Madrid.Credit:Getty

In this case, however, the president said he was willing to make an exception, not just for abortion rights but also “the right to privacy” amid concerns that this was also under threat.

“I believe we have to codify Roe v Wade in the law,” he said. “And the way to do that is to make sure the Congress votes to do that. And if the filibuster gets in the way… we provide an exception to this.”

Biden’s comments – one week after the Supreme Court made its extraordinary ruling – come at a critical juncture for the court, with liberal justice Stephen Breyer officially retiring today to make way for former public defender and federal appeals court judge Kentanji Brown Jackson, 51.

Brown Jackson, who was sworn in as the court’s 116th justice during a ceremony this afternoon, is the first black woman appointed to the Supreme Court in its 233-year history, but her elevation will not change the 6-3 conservative majority on the bench. In another first, all three liberal justices on the court are now women: Brown Jackson, Elena Kagan and Sonia Sotomayor.

Chaos has ensued since the court’s decision to overturn Roe last Friday, with women left scrambling for services as clinics have closed, while a raft of legal challenges have been mounted as abortion advocates try to buy more time against state-based bans.

The latest took place on Thursday (US time) when a Florida judge temporarily blocked a law banning abortions after 15 weeks of pregnancy, ruling that it violates privacy protections in the State Constitution. The law was due to take effect the next day.

Protests have also continued across the country, with pro-choice advocates foreshadowing a “summer of rage”, including another major rally in Washington on July 9 to call on Biden and the Democrats to act.

The president’s renewed push to codify Roe v Wade into law comes after a similar attempt was made in May following the leaking of Justice Samuel Alito’s draft opinion – but it did not have the votes to pass.

Biden said he also plans to meet with governors on Friday (US time) to discuss other ways abortion could be protected.

The Supreme Court’s ruling was one of many controversial opinions it has issued in the past few weeks as it capped off one of the most contentious terms in its history.

Last week, it also struck down a long-standing New York law placing strict limits on carrying guns in public, and on Thursday (US time), in another blow to the Biden administration, it limited the federal Environmental Protection Agency’s (EPA) ability to regulate carbon emissions from power plants.

The six conservative justices of the court issued the ruling, while the three liberal justices issued a dissent, saying that the majority had stripped the EPA of “the power to respond to the most pressing environmental challenge of our time.”