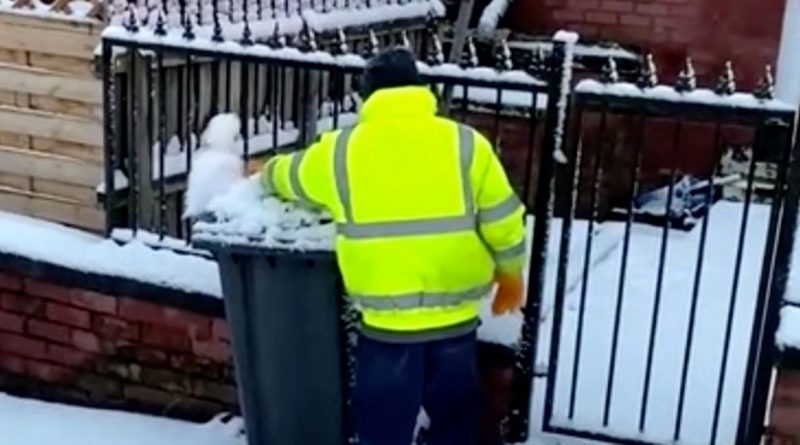 A pair of binmen have made a hilarious parody video in which they knock over a snowman after a refuse collector was sacked for the same reason.

Chris made the mini snowman and put it on top of the bin and then filmed his pal Paul stroll over and punch it straight off the lid.

He told Yorkshire Evening Post: "We did this in Harehills, I built the snowman.

"I jumped out of the wagon and built it and also filmed it. Don't sack him – it's just a bit of fun.

"We all need a laugh, here's some entertainment for you."

It comes after binman Callum Woodhouse was caught on CCTV giving a kung-fu kick to a 7ft-tall snowman, knocking its head off and upsetting a three-year-old boy who helped build it.

The binman was sacked by FCC, the waste contractor he worked for via an agency, after the incident in Tupsley, Hereford last Tuesday (January 26).

Callum, who is expecting a baby with his partner, was shocked at losing his job when the video went viral and told The Mirror: "I don’t think I have to say I’m sorry.

"His family knew it was not going to be there forever.

"The snowman was obstructing my path.

"I decided to kick it because I didn't think it was going to hurt anyone's feelings. I don’t think that snowmen have feelings.

"It was going to melt and snow again, I didn't think it would make such an impact on a three-year-old kid."

There is now a petition demanding he is offered his job back.

FCC previously said in a statement: "We were alerted to the incident by concerned residents and having reviewed the footage it was clear that the actions taken by this individual were not in keeping with the conduct expected of people representing our business or the council.

"As the individual was employed through an agency, we requested that he did not return to work other than to hand the uniform back.

"We believe this to be an appropriate measure given the nature of the incident."