Home » World News » Birthday gift like no other: Baby girl born on the same day and time as dad 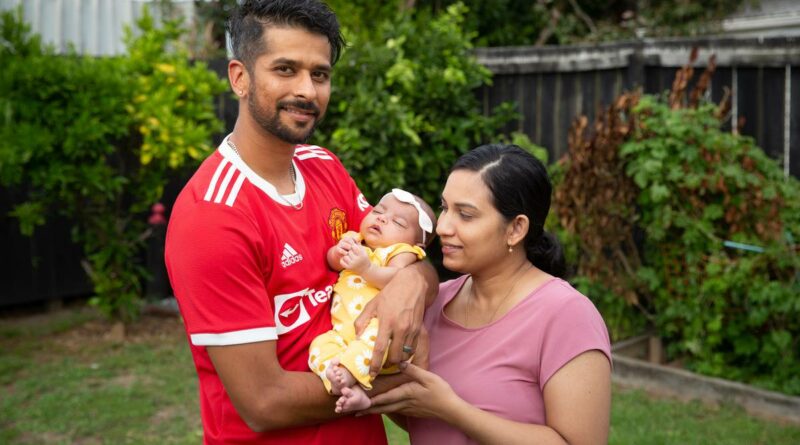 Auckland dad Rish Mahara never expected to be delivering his baby daughter Sanaya at home at the exact same time he was welcomed into the world 33 years ago.

Yet, despite there being about a one in 526,000 chance that a child will be born in the same minute as their father, that’s exactly what happened.

Mahara says he couldn’t have asked for a more special birthday gift.

“On New Year’s Eve, she was already two days overdue and I was ready to drive [my wife] Sonam to the hospital but that didn’t happen and it became a waiting game,” Mahara told the Herald on Sunday.

He said the night before his birthday, January 7, his family started saying ‘”what if she’s born on your birthday” and his mother told him he was born at 7.15am.

“I couldn’t believe it when Sonam woke me up at 4am the next morning in pain saying ‘I think the baby’s coming’. I thought no way, am I dreaming?” Mahara said.

He called their midwife but was told to stay put and be patient as labour usually takes five to six hours.

But after an hour and a half, Sonam’s contractions started to get stronger and closer together.

On the midwife’s advice, Mahara started getting ready to take his wife to hospital.

“But her pains started getting more intense and she really wanted to push. As soon as she pushed then the baby started coming out.

“At that instant, I started thinking ‘what the hell is going on’ and then I realised I had to step up. I remember in our antenatal classes being told the worst thing that can happen is you panic,” Mahara said.

Luckily, his mother was there to hold baby Sanaya as she came out, he said.

“Straight away she started crying and I took that as a good sign, her eyes were wide open, and I looked at the umbilical cord to check it wasn’t wrapped around and that was all good.”

He said he called an ambulance after that in case any medical assistance was needed and had their midwife on the phone asking them how mum and bub were.

“While on the phone, I had to keep an eye on my 2-year-old son, who was running all around the place, and my mum was holding the baby so it was all happening at once.”

Paramedics arrived within 10 minutes and mum and baby were cleared without needing to go to hospital.

When they finally had a quiet moment, Mahara said he checked the time of his 111 call and it was 7.18am. Baby Sanaya had been born just a few minutes prior.

Unplanned, there is about a one in 526,000 chance that a child will be born in the same minute as its father, Statistics Professor Richard Arnold said.

He stressed that was assuming that each minute of every day is as likely as any other and
was limited because of variations such as the type of birth and time of day.

Another mathematician professor Dr Matthew Parry said on his calculations once every five years New Zealand should expect a newborn baby to have the exact same birth time as one of their parents.

Baby Sanaya was now six weeks old living at home with her parents and older brother in Auckland.

“She is charming and always smiling. It’s incredible she came on my birthday at home, I’m just so happy she was okay.”