Bitcoin jumped to an 18-month high on Wednesday, as investors were spurred by prospects that Facebook’s Libra token could push cryptocurrencies into the mainstream.

Facebook announced Libra last week, saying that it would launch the digital tokens by June 2020, backed by a basket of government-issued currencies as a medium of exchange by users.

But unlike Bitcoin, which operates on a decentralized blockchain, Facebook’s cryptocurrency will operate on a private ledger, making the company a sort of de facto central bank.

That has led some critics to speculate that Facebook is attempting to seize powers normally reserved for national governments. 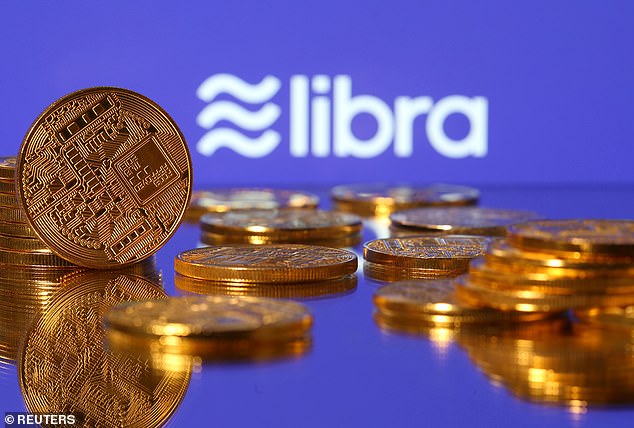 Facebook announced Libra last week, saying that it would launch the digital tokens by June 2020, backed by a basket of government-issued currencies

‘[T]he bulk of Libra users will be in what is essentially a closed network under the complete control of one CEO-slash-“emperor for life,”‘ Mark Zuckerberg, wrote Molly Wood in a new column for Wired.

Wood pointed out that about 350 million around the world use the U.S. dollar as their primary medium of exchange, but that even with partial adoption by Facebook’s claimed 2.7 billion users (including subsidiaries WhatsApp and Instagram), Libra could quickly surpass the dollar.

Although Facebook says that Libra will be overseen by an independent body of partners based in Switzerland, Facebook’s subsidiary Calibra will manage the cryptocurrency for Facebook users, where the company hopes most user adoption will occur.

‘These are government-level ambitions, by any measure,’ writes Wood. ‘[I]n the case of Facebook, you have to admit, becoming a borderless pseudo-state seems to be the goal.’ 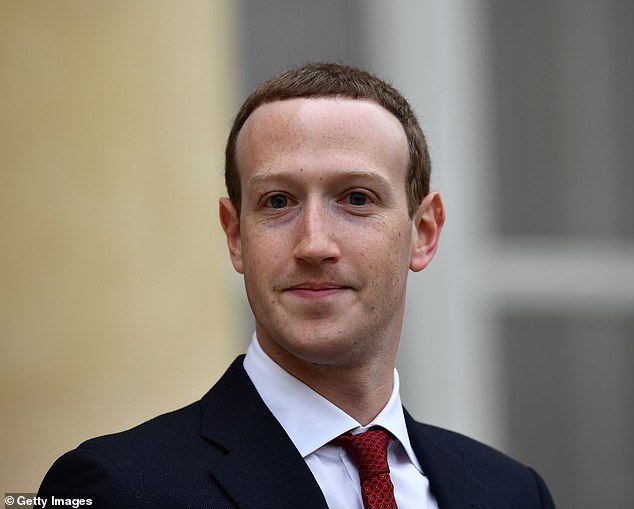 Facebook CEO Mark Zuckerberg wants to become ’emperor for life’ of his own ‘borderless pseudo-state’, one critic has written in a new column

For now, though, Bitcoin remains the world’s biggest cryptocurrency, and has surged in value since April. On Wednesday Bitcoin hit a peak of $13,666.02 on the Bitstamp exchange, the highest level since January 2018.

Investors have flocked back in to digital currencies after a bruising 2018. Bitcoin has risen for eight consecutive days.

‘Cryptocurrency traders were reinvigorated by Facebook’s launch of their own digital coin and momentum appears to be stirring up fresh new investors,’ said Edward Moya, senior market analyst, at online FX broker OANDA in New York.

‘Bitcoin skeptics are cautious in trying to stop this surge and may look for the next key resistance level which is $15,000,’ he added.

With major central banks keeping interest rates near all-time lows, investors have been looking for ways to diversify their portfolios, including through cryptocurrenies, analysts said.

Bitcoin CME futures volumes have also increased in the past few days, as investors look for ways to get their hands on the coin via the derivatives market.

Traders, who have access to both spot and futures markets have been buying the spot and selling the futures, arbitraging the two prices, said Michael Moro, chief executive officer at Genesis Global Trading, which provides over-the-counter digital currency trading for institutional investors.

The cryptocurrency has rocketed 150% since early May, along with big rises in other smaller digital currencies such as Ethereum’s ether and Ripple’s XRP.

‘It should be noted that this a very different market today than it was in 2017,’ said Moro.

ICOs refer to a fundraising scheme that bypasses banks and venture capital firms and involves startups creating their own tokens and selling them to the public.

WHAT DO WE KNOW ABOUT FACEBOOK’S LIBRA CURRENCY?

Libra is the name of the new cryptocurrency Facebook is backing which will launch in 2020, and once in circulation will be used to buy service digitally from a user’s smartphone.

The digital currency will be stored in a digital wallet called Calibra, a standalone app on a user’s smartphone or housed within Facebook-owned services such as WhatsApp and Messenger.

It has been backed by Visa and Mastercard, as well as businesses such as Uber, Spotify and eBay meaning eventually users will be able to use the currency to pay for almost anything from their weekly shopping to an Uber journey or their Spotify subscription.

How does cryptocurrency work?

Cryptocurrencies are entirely digital forms of money which use encryption to carry out transactions securely and in many cases anonymously between two parties, which many argue make it more secure against fraud.

A key benefit of cryptocurrency is also that they are decentralised, meaning that no one entity controls the currency in contrast to how a central bank controls traditional currency.

The currencies are often built on blockchain networks, a type of digital ledger technology where all transactions are publicly verified and recorded and can not be altered – creating a chain of information and improving transparency.

How is Facebook’s different?

The two biggest issues for cryptocurrency so far, Facebook argues, have been scalability and volatility. Bitcoin, for example, has seen its price fluctuate violently in recent years as its price is linked to supply and demand.

However, Libra is to be backed by a reserve of assets – including linking it to several international currencies – from a number of central banks in order to keep its pricing stable.

The developers have said that launching it through Facebook apps will also make it immediately accessible to more than two billion people globally – the number who use a Facebook app each month.

How can users buy Libra?

When the Calibra wallet for Libra launches, those wishing to use it will need to sign up for an account using a government-issued ID.

Users will then be able to convert their money into Libra and add it to their digital wallet. Once in place, the currency can be used to pay for “everyday transactions, like buying a coffee, buying groceries, or taking public transportation”.

Facebook said initially the new payment system will support peer-to-peer payments between individuals, as well as some other ways to pay for goods and services – for example by scanning a QR code.

The system will eventually be expanded to include integration into point-of-sale systems in stores, which would allow in-store payments that would work in a similar fashion to paying with a debit or credit card or using contactless.

Because it will also be built into WhatsApp and Facebook Messenger, users will also be able to send and receive money between their friends and families just by sending them a message.

This will also work with any businesses they interact with on those platforms, Facebook said.

When will it be available?

Still being finalised in its development, the full system of Libra and its Calibra digital wallet is expected to launch next year.